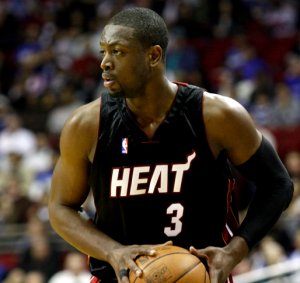 You have to wonder what Dwyane Wade is really thinking these days as he surveys the flotsam and jetsam around him. He knows he has no chance of winning a title this year. He knows that unless the Miami Heat do what no team has ever done, he will be on the golf course sooner than later, still looking for that first playoff series victory since the Heat won it all.

That was four years ago.

The Celtics-Miami series has given us two different looks into two franchises on the brink. The Celtics, trying to salvage one more serious run with limited time left, have channeled their inner Garnett to take a 3-1 lead. Along the way, they’ve rediscovered their defensive mindset (Wade’s Game 4 heroics notwithstanding) and they look a lot more intimidating now than they did in March and April when they were losing to the likes of the Wizards at home.

But the more fascinating examination is that of Wade and Miami. He willed them to a Game 5 with a spectacular performance in Game 4, scoring 46 points. But as we’ve watched this series progress, the nagging question remains: aside from the comfortable lifestyle, why would Wade want to stay in the situation he now finds himself in?

You look at what Cleveland did to surround LeBron James with a quality supporting cast (Antawn Jamison, Shaquille O’Neal, Anthony Parker, Delonte West, Mo Williams) and if that isn’t enough to convince James to re-sign, then there was never any hope. The Cavs have blown through the luxury tax to build a championship contender. Even Toronto took steps to keep Chris Bosh by bringing in Hedo Turkoglu (good idea, bad result.)

But you look at Wade’s “supporting cast” and it’s basically like looking back at Larry Bird’s Indiana State team: one priceless jewel complemented by four strands of department store bling.

Ever since trading Shaq, the Heat has tried, but essentially failed, in surrounding Wade with the kind of players that James has in Cleveland. Shaq brought Miami Shawn Marion, who in turn begat the enormously disappointing yet ludicrously expensive Jermaine O’Neal. Ricky Davis and Mark Blount arrived and both left, mercifully, the former as a free agent, the latter in a deal for Quentin Richardson.

The 2008 draft produced Michael Beasley, who, while widely seen as the second best player available that year after Derrick Rose, has, to be charitable, not even challenged the play of several fellow draftees (OJ Mayo, Brook Lopez, Russell Westbrook, even a healthy Kevin Love) who were taken after him. The year before that was Jason Smith (traded to Philly for Daequan Cook) and the two drafts after Wade in 2003 yielded Dorrell Wright and Wayne Simien, the latter of whom is not even in the league anymore.

This year, Miami’s big in-season acquisition, if you can call it that, was Rafer Alston. He’s already gone.

Wade doesn’t have a Scottie Pippen, a Kevin McHale, a James Worthy, a Pau Gasol, a Tony Parker, a Ray Allen. He hasn’t had one since Shaq left. Who is his top second right now? Statistically, it’s Beasley at 12.5 ppg. Wade is at 33.8 That’s a Jordanian gulf, reminiscent of those Bulls teams of the mid-1980s when it was Michael and no one else. And those Bulls teams famously flamed out in the first round of the playoffs for three straight years.

The Master Plan in Miami is pretty straightforward – re-sign Wade after he opts out and then toss around $24 million at the impressive list of free agents, starting with James. Maybe Wade knows something we don’t know. Maybe James has told him he’ll come down to Florida and the two of them will start a dynasty.

But anything short of James would still leave Miami behind Cleveland (if James stays) as well as, potentially, Chicago (if it can get, say Joe Johnson) or Atlanta (if it can keep Johnson) or even the Nets (who could have a top draft pick to go along with Devin Harris, Lopez and oodles of cap room.) Would, say, Carlos Boozer make the Heat that much better? Or the underwhelming Bosh? Wade could join a better team in his hometown of Chicago. He would have more help in New Jersey than he does now in Miami.

What’s pretty clear after watching the Heat in this series is that team president Pat Riley needs to get Wade out of town before he drops a neutron bomb on American Airlines Arena. O’Neal, Richardson, Udonis Haslem, Carlos Arroyo and Wright are all free agents-to-be. Mario Chalmers could also be allowed to leave. Beasley and Cook are under contract although you get the feeling Miami wouldn’t hesitate to unload the erratic Beasley if it could find a sucker, er, taker.

So while Miami is resting its hope on the not-too-distant future, the Celtics are all about the here and now. While most thought Boston would prevail in this series in six or seven games, jumping to a 3-0 lead and coming maddeningly close to a sweep was not foreseen. Had the normally automatic Ray Allen made his free throws, Wade might be going all wistful today instead of flying to Boston for Game 5.

The Celtics turned in a defensive clinic in Boston (after a shoddy first quarter in Game 1) and then won Game 3 at the buzzer. They have been the better team in the series, holding the Heat to 88 points a game on 44.6 percent shooting. They’ve attempted 34 more free throws over four games (they’ve made more free throws than Miami has attempted, even with Wade’s penchant for getting to line.) The Celtics are even out-rebounding the Heat, a surprise given that Boston was a horrible rebounding team in the regular season. A Celtics victory in Game 5 would give Boston at least three days off to rest/prepare for the next series, a probable matchup with the Cavs.

Boston will need to summon everything it has to make that a long, competitive series. Cleveland is loaded. It has James. And in two series, observers will get to look at two teams with franchise players who essentially went in different directions to acquire the necessary help to make a championship run.

The Cavs went all out. The Heat, simply, went out. They can only hope Wade doesn’t do the same.