Serge Ibaka: "I earned every minute"

Serge Ibaka: "I earned every minute" 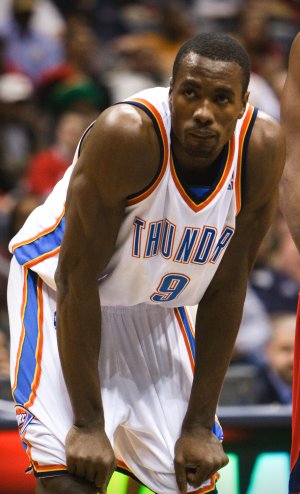 It seems so natural the way you guys are improving as a team and facing a challenge as big as the Lakers.

Serge Ibaka: Yeah, a lot of people are very surprised about us, but we have been working so hard since training camp that it’s no surprise for us.

You averaged roughly 18 minutes during the regular season and now you’re playing almost 25 per game against L.A. How hard has been that procress?

SI: Very tough. It hasn’t been easy. I didn’t earn it for free. People say, “Ah, OK, Ibaka is an athletic guy, so he plays”… No. I started playing two minutes, and I tried to give everything I had. Then coach put me three minutes on the court. Then five. And so on and so on until I was a player that can really help my teammates. I earned every minute. You can’t do much when you play four minutes. But whatever you do, you can do it right. My team needed my defense at first, but now I’m showing that I can do more things. Now I have more confidence in my offensive game, shooting open shots.

How has been your improvement on that area?

SI: Very good. Every day I’ve been shooting the ball at practice, working hard with coach Mark Bryant. Coaches are giving me a lot of confidence to shoot the ball. I practice the three-point shot too, and although right now I’m not shooting it a lot (1-of-2 in regular season) if I’m open I’m gonna shoot it. I would like to be a better perimeter shooter in the future.

How are you feeling in this series, battling with Pau Gasol?

SI: It’s not easy at all, I can tell you that. I’m defending Gasol inside the paint and Lamar Odom outside… But definitely, the most difficult matchup is Gasol. He’s so good. With Odom, I try to block or alter his shots so he has to shoot with his right hand. That way, his percentages are not so good. But with Pau, he’s very tall, very strong, he can shoot it with both hands, crashes the boards, runs the floor… You have to be so focused, you can’t relax for a second. You could see it on Game 5. We entered the game kind of relaxed and they started like it was the last game of their lives. They were killing us from the beginning. Now we have to come out very aggressive.

What is the key to winning the series?

SI: Russell [Westbrook] is a big key for us. Our point guard controls the tempo of the game. We have to pressure them, not let them think, and run the floor.

Westbrook doesn’t want to go home today. So do you think there will be a Game /?

SI: Yes. That’s what I think. We’re going to come out really agressive and I guess we’ll come back to Los Angeles.

And see Jack Nicholson chatting with your coach again.

How did you feel when you won the first game?

SI: It was unbelievable, because it was so hard to beat them. The second win was spectacular and kind of surprising.

Your blocking skills are really impressive.

SI: Well, I was doing the same when I played in Spain. I always liked blocking shots, so maybe I have a natural feel for that.

Thunder fans really like you. There’s a lot of nicknames for you lately…

SI: Yeah, they call me Iblocka a lot, Doctor Nasty too… And I have my move Air Congo.

SI: It’s funny. Very funny. Kevin Durant is the funniest of all. Westbrook is the one who makes the practical jokes. We have a young coach, a young general manager. The atmosphere is great. We have some veteran players like Nick Collison, Kevin Ollie, Etan Thomas… They give us great advices.

How’s Scott Brooks as a coach?

SI: When you do your job, then you have nothing to worry about. Then we have five more coaches on the team and we talk with them too. When we are practicing he usually speaks when he sees something that is going really wrong. I talk a lot with Mark.

This Thunder roster is young and not too expensive. The franchise could lure a very good player during the offseason and still keep the core intact.

SI: Well, that’s not really my job, it’s up to Sam Presti. We already have a good, young team and now the franchise will make decisions to improve it.

SI: Yes, he’s kind of young for a general manager job in the league, and I’m happy for him. You know, we’re young, funny and we all work really, really hard.

Years ago, the Blazers were a dynamic, young and talented roster. Now they still are a very good team, but they are going through some tough times with all the injuries and other issues.

Which players do you like to watch or play against?

SI: When I watch Joakim Noah, I think about energy. I admire him, he goes after the rebound every time. Very active guy. Then I follow the offensive skills of Chris Bosh and Kevin Garnett… How they go to the rim, their mid-range shots…

Everybody likes the way you dunk… The last dunk contest was a disappointing one.

SI: I expected more, like everybody else. Next year will be better, for sure. And I would like to be there. Rudy (Fernandez) played the guitar to participate… My agents are working on something in order to improve my chances (laughs).

How hard has been adjusting to your new life after arriving to the United States?

SI: I would say that I haven’t had any lifestyle apart from practicing, travelling around the country and playing basketball. Life is good here, although I miss the Spanish food so much… Congo food too. I ate Spanish food in Oklahoma City. It was OK, but you know…

SI: Well… A lot better. At the beginning of the season I could barely talk, but now I’m already talking with the journalists. Now with the playoffs, I have no real time to practice. When I come back, I will continue studying.

But you will keep practicing when you go to Spain this summer, right?

SI: No, no, in Spain I’ll speak only Spanish (laughs).

You will be 21 just before the start of your second NBA season after playing in the Spanish League ACB. It seems that Ricky Rubio will play there until he’s 22.

SI: Well, he’s very young, and so good. He has such talent… It was his decision to stay there. I’m sure he’s got a lot of confidence and if he wanted to stay in Spain. He has every right to do so. He has a lot of potential and I wish him luck.