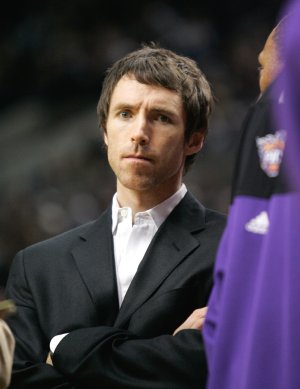 Phoenix Suns owner Robert Sarver has thrust himself directly into the hot-button issue surrounding the controversial Arizona immigration law by having his team wear jerseys saying ‘Los Suns’ for Game 2 of their conference semifinal against the Spurs. The Suns, who wore the jerseys twice during the regular season, are doing so this time “to honor our Latino community, and the diversity of our league, the state of Arizona and our nation,” Sarver said in a statement.

But it’s really about honoring the Latino community, which is in the crosshairs of the appalling new Arizona law. The law makes it a crime to be in the country illegally, and it directs local police to question people about their immigration status and demand to see their documents if there is reason to suspect they are illegal. In other words, it’s racial profiling.

The Suns players made the final decision and Steve Nash, this generation’s Bill Walton, spoke for his mates, who endorsed the idea. Nash called the new law “misguided.” The NBA approved the uniform change, the players association weighed in with their support, and even Spurs boss Gregg Popovich said he wished San Antonio could wear jerseys saying ‘Los Spurs.’

“It’s a wonderful idea,” Popovich said. “because it kind of shows what we all should be about. Sure there needs to be a lot of work done, obviously. A lot of administrations have done nothing about the immigration deal and now everybody’s paying the price, especially a lot of people in Arizona. That’s a bad thing, but the reaction is important, too, and this reaction [the Arizona law], I believe with Mr. Sarver, is inappropriate.”

Politics and sports can sometimes be a toxic mix. For every earnest attempt to call attention to a political issue – Ira Newble and the genocide in Darfur, for instance – there is often a less enlightening counterbalance. In the mid 1980s, participants in the NBA All-Star Game agreed to donate their shares to fight famine relief in Africa. A year later, with things still horrible in Africa, but with not the same amount of attention and publicity, there was no such movement. When asked where his share would go that year, Larry Bird said, “to the Larry Bird Fund.”

Former Celtic Cedric Maxwell put his foot in his mouth when he explained his reasoning for voting for ultra conservative Jesse Helms in a North Carolina US Senate race.

“Most of the brothers don’t make the kind of scratch that I do,’’ Maxwell said.

Michael Jordan, another son of the Tar Heel State, famously explained his support for Helms by noting, “Republicans buy sneakers too.”

The league has entered the political world by endorsing safer topics such as child abuse and a number of public service projects. It ordered American flags placed on backboards at the start of Desert Storm in the early 1990s. Commissioner David Stern rightly condemned the ignorant, homophobic ramblings of Tim Hardaway a few years past.

What makes this case so rare is that it is being generated by an individual organization that is confronting a contentious political issue. This didn’t come from on high – i.e. Stern, who, given his well-known political leanings, might even be a little jealous that he didn’t think of it first. This came from a discussion between Sarver and his general manager, Steve Kerr, as to how the team should respond to the growing criticism of the law while showing its support for the Latino community. One thing led to another and ‘Los Suns’ was resurrected. The Suns were 2-0 this season when they wore the uniforms.

This isn’t the first time Arizona has found itself in the spotlight for the wrong reasons. The state repeatedly refused to approve a holiday honoring Martin Luther King, Jr., and lost Super Bowl XXVII, which was to have been played in Tempe. In 1991, still with no King Holiday law on the books, many colleges refused to participate in the Fiesta Bowl, which is held in the state. A 7-4 Alabama team finally accepted a bid. There already is a call to pull the 2011 baseball All-Star Game from Phoenix if the law remains on the books.

There is bound to be opposition to the Suns move, as is the case with all controversial issues. There will be more than a few pleas for separation of sports and politics. Polls indicate a vast majority of Arizonans support the law and many of them could well be Suns’ season-ticket holders. The articulate and intelligent Kerr has said that he thinks the wearing of ‘Los Suns’ jerseys isn’t so much a response to the law as it is a celebration of diversity in the city, state, league and country. But he’s too smart to not understand what this really is.

The state of Arizona sent a message, loud and clear, that, absent a national policy on immigration, it is going to do it alone. That is not an unreasonable response. What is unreasonable is the statute that came out of that response.

The law targets Hispanics. Now the Suns are targeting the law itself. They’ve got the league and the players behind them and, for that, Sarver deserves major props.

Now, all he has to do is figure out a way to keep Amare Stoudemire.