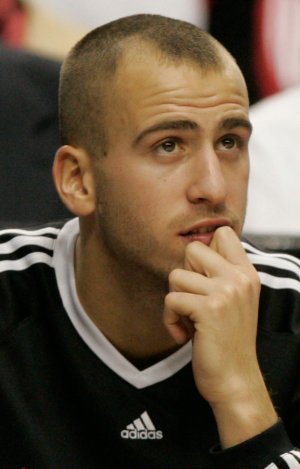 Sergio Rodriguez‘s career in the NBA has been one of high and lows. Many of the highs came during his rookie season in Portland, when he was once looked upon as the potential point guard of the future for the team. Some of the lows came this year, when he logged four consecutive DNP’s with the rebuilding Sacramento Kings.

Truth is, neither Portland nor Sacramento were good situations for him.

With his slow, give-it-to-Roy style, the Blazers were a particularly bad fit. Rodriguez’s freelancing didn’t bode well with a conservative coach like Nate McMillan, who considered him (with some merit) a defensive liability. Last summer’s trade to Sacramento didn’t improve things for Rodriguez, who got stuck behind instant franchise player Tyreke Evans and the much-improved Beno Udrih.

Fortunately for him, the Knicks acquired him just before February’s trade deadline and Rodriguez got a chance to shine a little bit with extended minutes under Mike D’Antoni. It was nothing overly impressive, but good enough for Rodriguez to finish the season with career highs in points (6.6) and steals (0.8).

It’s no surprise that now Rodriguez, nicknamed Spanish Chocolate for the resemblance of his game to Jason Williams’, looks at the Knicks as his No. 1 option when he becomes a free agent for the first time this summer.

From what he’s hearing, the interest is mutual.

“They want me for next year, but they are waiting to see what they do with the rest (of free agents),” Rodriguez said. “I spoke with Donnie (Walsh) in my exit interview. He was happy with what I had done. It was a positive conversation. They were very positive in that it sounded like they wanted me for next year.”

The Spanish guard, who is drawing interest from top European teams like Real Madrid and Valencia Basket, says he will probably return to the United States to be heavily involved in free agency negotiations.

“It seems like I’m going to be there in early July to see what I do,” Rodriguez said. “I want to make a decision soon whether it is to stay or leave (for Europe).”

The big issue for Rodriguez is that his desire to stay in New York and the wish to have his contract status resolved soon might be mutually exclusive. He has proved to be a serviceable point guard in the NBA, but not starting material. At least, not yet. So his place in the pecking order of free agency will not be high. Rodriguez could easily have to wait until well into August, especially if marquee free agents like LeBron James, Dwyane Wade or Chris Bosh don’t make their decisions early.

The top European clubs usually don’t wait that long to have their rosters set, which could make Rodriguez rush his decision.

One thing going for him: The draft is void of point guard talent this year and NBA teams could be looking to upgrade the position via free agency instead. But there’s no guarantees for Rodriguez.

Either way, the likeable Spaniard says money, although a factor, will not be high on the list when it comes to making a decision.

“I’m going to make my decision the same way I’ve always made them,” Rodriguez said. “Basketball, even though it’s my job, to me is still a game. I enjoy playing basketball. So it’s going to be based on vibe. The vibe I get from one team or another. Or where I think I’m going to enjoy the most playing and enjoy the most winning.”

The winning part would be bettered in New York if LeBron James finally chooses the Knicks. You can count Rodriguez among the skeptics, though.

“I have no idea what LeBron is going to do,” Rodriguez said. “There’s one thing clear… He’s on a championship-type team, where he has played the Finals, conference finals… I don’t know if he’s going to New York. I’d love for him to sign there because it’s on the Knicks’ best interests, but it’s going to be difficult because he’s on a championship team that has been totally built around him. And besides, he’s from Cleveland.”

With or without LeBron, Rodriguez would be a proud New Yorker if the Knicks decide to stick with him.