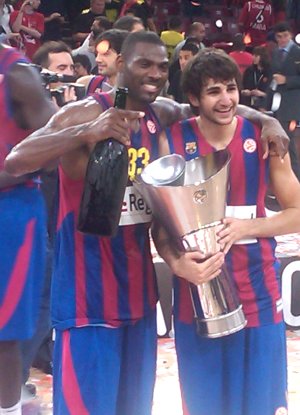 Just came back from Paris with the Euroleague title under my belt after beating Olympiakos 86-68.

Although it was a dream to visit Paris for the first time and win the European crown, I still haven’t popped the bottle of Moët Chandon I got back in December… There’s more business left to do! We’re fighting for another big trophy – the Spanish ACB League – so I’m not in any hurry.

I had my friends in Paris with me, so it was great to be able to celebrate with them and my teammates. Got great pictures, great trophy… I told Ricky Rubio, “You’re gonna get everything you want in your life when it comes to this basketball thing, because you’re special.” He proved everybody what he could do in the Final Four. After the championship game, he was just emotional,.

I didn’t see everyone so emotionally drained or so excited that we had won the championship. I think we kind of knew we had a great chance to win it and we had a lot of confidence in ourselves. I didn’t see guys laying on the ground crying like we had just beat the Lakers or something. It was more like business as usual. We’ve got the focus to win it all. We’re in this for the long run. The Euroleague title was a great step, but our ultimate goal is to win the triple crown: the Cup, the Euroleague and the League.

For me, the semifinal was a lot harder. I played 30 minutes and every play was against me, whether it was Ramunas Siskauskas or Viktor Khryapa. Every screen-and-roll, every one-on-one… So I got beat hard but, well, I can get that kind of contact. It’s not big deal. After the game coach Xavi Pascual joked about that and told me, “Every play was against you, you should be really tired.”

I was not really satisfied with my game in the final vs. Olympiakos. Actually, I’ve never been satisfied with any game I’ve played. There’s always something I go back and look thinking I could have done better. In the title game, I showed the same mentality: put the team on my shoulders and go for it all. If I lose that mentality only for two minutes, it can be the difference between winning and lose.

This is my first year playing with FC Barcelona. I’m the guy who has played more minutes and I’m doing it with a club that has won two titles already. In the Euroleague competition, I have the highest evaluation and the highest rebound average… This situation doesn’t often happen when you just moved to another team. Sometimes it’s hard to make the adjustment. But Barcelona has been easy for me.

Now we’ll see what happens next year. There’s a lot of options out there. A lot of decisions to make next month.

BELIEVE IN THE CELTICS

If you read one of my blog entries last November, you’ll know that I picked the Celtics to win the NBA title this season. You gotta go with the Celts. They’re good and they’ve got so much confidence… There’s Ray Allen going off the screen, Paul Pierce going one-on-one, Kevin Garnett in the low post making a great pass or a turnaround jumpshot…

And then there’s Rajon Rondo.

The kid is playing great. His confidence is unbelievable right now. You gotta give the Celtics the credit. Like I always say in the media… Reward the players for doing a great job and sign the contracts early!

They signed Rondo to a five-year, 55-million contract. Everybody said he shouldn’t get that type of money. Even the Danny Ainge had a lot of hesitation about giving him a lot of money because they never know how players are going to react after they get that money.

The Celtics did the right thing and now he’s playing great.

His future is set. He doesn’t have to worry about where he’s going to play next year. Only thing he focuses on is playing basketball. That’s why he’s got a clear mind. If somebody asked Rondo, I’m sure he’d tell you the same. I’m speaking from a player’s point of view that this is what happens when a guy gets a long-term deal and they get what they deserve. When guys win championships for you, reward them with contracts.

It’s the same thing in Europe. Some teams don’t reward the players that do great jobs for their teams. That’s why you see teams like CSKA Moscow having so much success over the last few seasons.

Players have egos and if they win titles and don’t get rewarded like they should, then there’s always going to be problems and plans to go elsewhere and play for other team.

Talk to you soon. Bye!