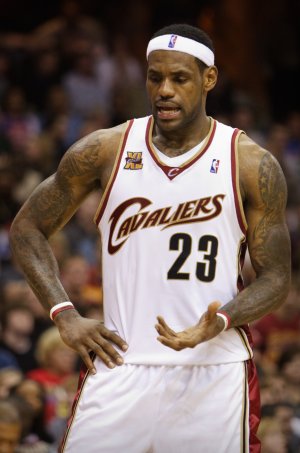 Well, you can’t say that he didn’t shake hands this time.

Once again, a season for LeBron James and his Cleveland Cavaliers has ended prematurely, far short of expectations.

Last spring, he was criticized roundly for stalking off the floor in frustration and failing to offer congratulations after his Cavaliers were ousted from the postseason by the Orlando Magic.

This time, James met the Boston Celtics with a pointed display of handshakes, hugs and sportsmanship. In that sense, the scene in TD Banknorth Garden after Game 6 of the Eastern Conference semifinals was almost funereal.

It didn’t make Cavaliers fans or the city of Cleveland feel any better, however. Far from it. “The Bitter End,” the Cleveland Plain Dealer proclaimed in its headline. The ending had been foreshadowed by the Cavs’ miserable home loss in Game 5 that left Cleveland fans literally booing James off the floor.

One longtime James associate says James seemed to get caught “in protest mode” in the terrible Game 5 120-88 blowout where he scored a mere 15 points on 3 of 14 shooting.

“I’ve seen him do it before,” said the associate, who has been closely involved with James since youth basketball. “If it’s a decision in a game, LeBron will veto it and do whatever he wants to do. I thought he went into protest mode. Something happened.”

The protest seemed to be set off by a coaching decision in the second quarter, perhaps a substitution.

“He was not even playing aggressive at all,” the associate said.

James’s trademark energy and leadership were absent, reminding the associate in particular of a sequence James’ rookie year where he grew unhappy with teammate Ricky Davis and withdrew emotionally from the proceedings.

In that instance, James disengaged and let Davis “self-destruct” without support. Other stars, Kobe Bryant in particular, have appeared to stage similar protests on occasion during their careers.

Such incidents are cast in perception and intangibles, which make them hard to certify. During the series, James averaged 26.8 points, 9.3 rebounds, 7.2 assists, shot 44.7 from field, all better numbers than he posted in 2008 against Boston. Yet Game 5 sticks out sorely with his body language, lack of aggressiveness and absence of leadership.

If James was pitching a superstar snit in Game 5, he picked a terrible time to do so. His team never recovered from the incident. Instead, his performance only served to deepen the mystery about James’ impending free agency and the possibility that he could leave the team and his native state of Ohio to find opportunity elsewhere, in New York or Chicago or Los Angeles or Miami or anywhere that his heart desires or that John Calipari and John Wall land (if you buy that speculation).

That is the nature of LeBron’s unique power. He can literally insert himself into any of the NBA’s 28 markets to make a future for his competitive and business interests. Money is not the object here.

“The world is his, whatever he wants it to be,” Boston’s Kevin Garnett observed afterward, suggesting that his own career perhaps offers the best mirror for LeBron. Garnett labored for years with the Minnesota Timberwolves under mountains of competitive frustration that ended in 2008 only after he had forced a trade to Boston, where he finally won a championship.

Garnett said he hadn’t talked with James privately. Instead he took the opportunity at the post-game podium before a packed room of assembled media to reflect on the great power and value of youth in the athletic marketplace.

Especially youth that is supremely talented. James is only 25 and has already played seven NBA seasons, the last two of them as the league’s MVP. Garnett said that knowing what he now knows, he would have made his own decision earlier to get with the right kind of organization.

James and his management team have been keenly aware of this singular opportunity for some time now.

“I’ve given myself options,” he acknowledged in the somber aftermath.

However, the long-time associate thinks the incident may have back-fired on James. “I think he’ll look bad if he leaves now,” observed the associate. “He’ll never live it down.”

Indeed, for someone with such a bright future, James strangely ran out of options on the court against the Celtics. Boston’s team defense made sure of that.

“Boston, they try and keep you on the perimeter as much as possible,” he said of the Celtics’ pack-it-in style that worked so well.

In Game 6, James registered a triple double, 27 points, 19 rebounds and 10 assists. But he also rang up nine turnovers and the Cavs as a team turned it over a whopping 24 times, resulting in 27 gravy points for Boston.

If anything, the outcome was reminiscent of what a healthy Boston team did to Kobe Bryant and the Los Angeles Lakers in the 2008 league championship series.

After a slow and uneven recovery from injuries during the regular season, Boston’s Garnett has rounded into excellent health and the team is now playing at a high level, obviously driven by the superior and mature point guard play of Rajon Rondo.

If Boston rides on to win a title, the harshness that James faces will abate somewhat. Still, Game 5 could haunt him for a long time. If James was indeed in protest mode, it could at the very least signal the end of coach Mike Brown’s tenure with the team. In his post-game interview, James acknowledged that he had been disappointed with Cleveland’s lack of adjustments during the series.

“They’ll have to change coaches if LeBron’s going to stay,” the James associate said. “They need someone to command respect in that locker room. Mike Brown’s not a bad coach at all. He took them as far as he can take ‘em as a coach, though.”

Will James have to leave the Cavs to find the right competitive situation?

“I love the city of Cleveland, of course,” James said, explaining that he had made no decisions, that he would now begin work with his management team to sort out his options. “We’ll see what happens.”

The priority is clear.

After Cleveland’s failure last year, it was pointed out that theteam lacked a scorer at the forward spot to support James. Antwan Jamison was acquired from Washington at mid-season to bolster the frontcourt, but a case could be made that Jamison needed more time to adjust to the Cavs to be truly effective.

As a result, it was another Cleveland flame-out. After all, James is the league MVP, his team had home-court advantage, and they were supposed to win.

James said he didn’t see this coming, but observers were left wondering. He put tremendous pressure upon himself and his team with his unprecedented free agency. Yet that was to be expected. No player has ever exercised greater control over his competitive environment without struggling through a harsh transition.

Wherever he goes, whatever he chooses, James has a surefire thing upon which he can rely — his combination of talent, youth and drive.

“As an individual, I’ll continue to get better in the offseason,” he promised, “as I always do.”