Don't underestimate the power of the Suns

Don't underestimate the power of the Suns 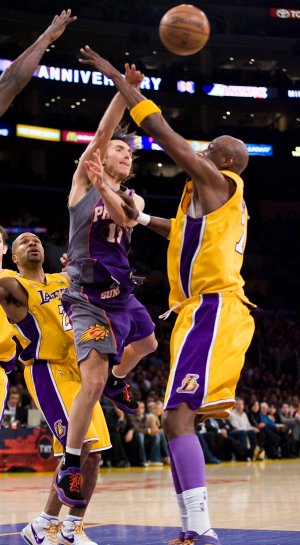 The Lakers are heavy favorites to win their third Western Conference title in a row and rightly so. They are the defending champs and have virtually the same team as last year – only better since Ron Artest is replacing Trevor Ariza.

The Lakers have won six in a row and seem to be healthy with the exception of Andrew Bynum. They were stretched in the Oklahoma series and the argument could be made that they would have lost that series if the Thunder were a bit more experienced. They prevailed and continued on to sweep a beat up Jazz team.

The team standing in front of the defending champions is coming into this series with a ton of confidence. They beat a talented Blazer squad that got a jolt of confidence with the return of Brandon Roy and shocked the basketball world by sweeping the Spurs in dominating fashion.

The Suns have definitely traveled the tougher road and now could prove extremely dangerous for the Lakers.

Make no mistake about it… These two teams and cities do not like one another, so this will be a hotly contested series with emotions galore.

The banter has already started with L.A. columnist Bill Plaschke ripping the Suns and stating that they have zero chance to win this series.

Good thing for the Suns that this same columnist said the same thing a few years ago when the Lakers had the Suns pinned down 3 to 1 and the Suns won three in a row to take the series.

Things have changed since then with the addition of Pau Gasol and last year’s title and the Lakers realize these are not the same Suns defensively that they saw a few months ago.

Phoenix has become a tough and defensive-minded team, which is a good thing when facing the Lakers’ very big frontline of Gasol, Bynum and Lamar Odom.

Yes, you can call me a Suns fan but, unlike Plaschke, I will at least write an article talking about why each team could win and discuss key details about the series.

– They totally dominate the Suns inside offensively and on the offensive boards. Gasol, Bynum and Odom present huge problems and the Suns will struggle if these three have a great series.

– Kobe Bryant shares the ball and his teammates perform – allowing him to be fresh in the fourth quarter to close out games.

– Derek Fisher continues to knock down timely shots when Kobe or Gasol are double-teamed. Fisher was the MVP of the Jazz series because every time they needed a basket, he provided it.

– Defend the two-man game and recover to the Suns three-point shooters forcing them to drive into the teeth of the Lakers defense.

– They win the paint and compete on the defensive glass like they have since the All-Star break.

– Continue to shoot the ball from the perimeter like they have since the playoffs started.

– Jason Richardson continues to score, forcing Kobe to expend energy on both ends of the floor.

– Make the Lakers play Odom and keep Bynum on the bench for extended periods of time.

– Force Kobe to take a high volume of shots by getting early leads in games and making Gasol a passer.

– Keep the tempo at a fast pace and score 100-plus points.

Here are other barometers during this series to pay attention to…

– Lamar Odom: Presents many problems in the paint and on the perimeter defensively. If he has a great series, the Suns are in trouble.

– Channing Frye: He can single-handedly keep Andrew Bynum on the bench for long stretches with his three-point shooting. Frye has to knock down shots for the Suns have a chance to win.

Kobe, Fisher, Jordan Farmar and Shannon Brown have averaged 49 points in 10 playoff games while the foursome of Nash, Richardson, Goran Dragic and Leandro Barbosa have put up 55 points per contest.

This matchup is huge for the Suns because they have a decided edge offensively in the backcourt and they realize this advantage will give them a chance to pull the upset.

The Suns have the best bench in the league alongside the Orlando Magic. Odom is the only player off the Lakers’ bench that could produce a 20-point night, whereas Frye, Dragic, Barbosa and Jared Dudley can do that for Phoenix.

Ron Artest: He can be a major problem in this series. He can guard Jason Richardson if he gets hot and forces Kobe to use excess energy. He also can score 30 any night and force a handful of turnovers. Artest is an All-Star on any other team and his defense is downright nasty.

Robin Lopez: The Suns have no idea what Lopez will offer after missing so many games, but the one thing they can count on is tremendous effort and a big body to bother Gasol and Bynum. Before his injury, Lopez was arguably playing the best ball of any center in the Western Conference.

Finally, I do not believe in numbers generated during another playoff series in terms of predicting how a new series will go. The Lakers are giving up the most points at 97 and the Suns are allowing 95… But yet the Lakers are viewed as a top-level defensive team and Phoenix is not. That’s why you throw everything out the window statistic-wise and measure from Game 1. Both teams will be well rested and that could bring about rust, which usually causes turnovers and poor shooting.

Let’s hope this series at least can bring the drama we have been longing for since the playoffs began.