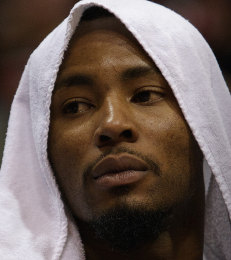 Oh, wait! He is playing in the Eastern Conference Finals? Then who exactly is that Stepford Rashard wearing No. 9 for the Orlando Magic?

Or, to paraphrase Earvin Johnson, “you’re making $118 million. Go out and earn it!”

OK, it’s not fair to blame Lewis alone for the current state of the Magic, who lost the first two games of their conference final against the Celtics, both of them in Orlando. The next two games are in Boston. Franchise icon Dwight Howard suffered through a horrible Game 1. Jameer Nelson is joining a list of point guards being exposed and outplayed by the Celtics’ Rajon Rondo. No one on the Magic has had any luck with Paul Pierce, freed from LeBron duty and playing well again. Matt Barnes says he want to guard Pierce in Game 3. Good luck.

But Lewis has been brutal. He has taken 16 shots in the two games and missed 12 of them. He has missed eight of nine three-point attempts. He has 11 points in the two games, three less than he averaged this season, his lowest output in 10 years.

If he wasn’t getting the big bucks, and plenty of NBA folks cringed when he got what he got, then he wouldn’t necessarily have to bear the brunt of the criticism. But if you take the big dough, and no one thinks Lewis should have turned it down, then you accept and live with the expectations that come with such a deal. You can’t be a wallflower.

If Orlando has any hopes of making this a competitive series – and the Magic were 2-0 in Boston this season – then one would have to put a resuscitated No. 9 at the top of coach Stan Van Gundy’s wish list.

“I don’t have those moments of genius inspiration and they are a very good team,’’ Van Gundy said before his team arrived in Boston for Game 3. “But we are going to try a couple of things to give him more opportunities.”

You think? This is a classic matchup nightmare for almost any team, a smooth 6-10 forward who can knock down threes or take it to the basket. You would think the mobility-challenged Kevin Garnett would have his hands full trying to defend Lewis (who blew by Garnett for a winning layup in one memorable play in the regular season.) You would be wrong.

Last year in their epic seven-game playoff series against the Celtics, Lewis averaged 20.4 points a game and knocked down 11 three-pointers. But last year, Garnett was on the sidelines wearing suits that cost more than his mortgage. Having Glen Davis in your grill is a little different than going eye-to-eye with the menacing Garnett.

The Celtics’ team defense, now playing at a 2008 championship level, has stifled and smothered the Magic. Boston has succeeded in defending the game’s best center, Howard, one-on-one. Orlando has averaged 90 points in the two games while shooting less than 41 percent, as the Celtics’ defenders, including Garnett, have stayed with their men on the perimeter when Howard posts up.

Lewis talked about feeling no pressure due to his subpar play and vowed that the Magic were still the better team and would come back to win the series.

“I just want to try and get some rhythm going,’’ he said before Game 3. “Because they’re completely trying to take me out of the offensive end of the floor.”

They’re not trying to take him out. They are taking him out. But, as the cliché goes, the playoffs are all about adjustments and Van Gundy is not a stupid man. He will try something. He has to. You can’t have arguably your second-best player delivering third-string center numbers.

Given the way the Celtics played at home in the regular season, no lead is safe at TD Garden. Let’s not forget that the Celtics came back from Cleveland tied 1-1, and could have been up 2-0, then proceeded to lay a Brontosaurus egg in Game 3, suffering the worst home playoff loss in the franchise’s illustrious history.

They have not lost since then, winning five straight games. Three of the victories have come on the road, where they are 5-2 in the postseason. The Magic never led in Game 1 of the series and led only briefly in Game 2.

If they continue to play the same way in Boston, it will be a short series. Maybe the Magic don’t figure there’s a need for a major overhaul, but they certainly need more, a lot more, from No. 9. Right now, he’s the second best No. 9 on the floor in the series (Rondo also wears No. 9) and that has to change for Orlando to earn a second straight trip to the NBA Finals.