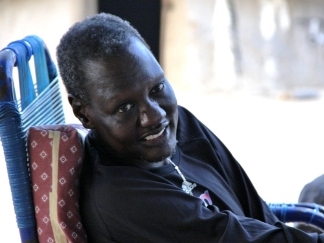 Former NBA player Manute Bol has started to show some progress after one week in a hospital in Northern Virginia. So says friend Tom Pritchard, who has worked with the 7-foot-7 Bol in trying to promote reconciliation between Christians and Muslims in war-ravaged Sudan.

Bol was hospitalized on May 18 after falling critically with severe kidney trouble and a painful skin condition called Stevens-Johnson Syndrome.

“He is doing a little better,” Pritchard, the founder of NGO Sudan Sunrise, said. “He is receiving dialysis treatments, and they are treating the Stevens-Johnson Syndrome, which is causing his skin still to itch terribly. He has been transferred out of Intensive Care, and is beginning to eat a little.”

Bol, who has been riddled with health problems ever since a car accident in 2004, had spent the last few months in his home country in order to build a school in conjunction with Sudan Sunrise and help tackle corruption with election appearances upon the president’s request.

The former player of Washington, Golden State, Philadelphia and Miami, considered the tallest in NBA history, has received hundreds of get-well messages on Facebook that will be printed and passed to him.

“The outpouring of love and encouragement from his fans around the world has been wonderful,” Pritchard said.