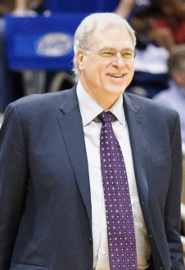 You could just sense that the free agency of LeBron James was going to devolve into something strange this summer. But who could have guessed that it was going to wind up with the NBA’s top figures looking like a bunch of giddy sophomores at a high school dance?

That’s where we all find ourselves these days, hanging on to innuendo and asides, trying to decipher coded love notes and whispered sweet nothings.

Trying to figure out the true love.

Hush up, will ya? You have to listen closely for this stuff. It’s like we’re standing around in a gym decorated with streamers trying to figure out who’s zoomin’ who?

LeBron is mum and glum. And Lakers coach Phil Jackson is one coy dude.

This much, and only this much, is clear. James is a free agent, leading a free agent class brimming with talent. That alone threatens a major reconfiguring of pro basketball’s power structure this offseason.

But there’s also a dark cloud hanging over the intrigue. The NBA will play the 2010-11 season, but just about everyone agrees that the following season will be lost to a contract battle between team owners and the league’s players union.

So the mystery deepens, and just about all the intrigue emanates from King James himself. What will he do?

Perhaps the obvious clues are the whispers in and around his old friends that follow a certain thesis.

They say that LeBron can’t waste any more time fooling around with his legacy or the next thing you know he’s gonna be 30 with a puny little jewelry collection that doesn’t match his hype.

They say that he really hasn’t been coached since high school.

That if he wants to win championships he needs somebody to get “nose to nose” with him.

That he needs a coach not intimidated by his status and persona, somebody who won’t hesitate to get in his face and in his game.

That he needs to quit showing off and give up the ball to the point guard and run the floor.

That he needs to lose all that emphasis on the funky perimeter game and get his ass in the post, or at least in better scoring proximity.

That he needs somebody like Ten Rings, better known as Big Chief Triangle, aka Jackson.

So, now, with the deadline for free agency an unbearable five weeks away it seems to be down to Jackson and James. And that should come as no real surprise, if you think about it.

We find ourselves eavesdropping on the ultimate hoops love story that began quietly brewing last season, when Jackson openly professed his man love for James, never mind that Jackson was actually coaching Kobe Bryant and the Lakers.

Only Phil could get away with such strangeness. His detractors like to say he has coached 10 championship teams because he’s had Michael Jordan, Scottie Pippen, Shaquille O’Neal and Bryant leading his immensely talented teams.

The truth is, it’s a rare bitch who can coach great talent. As one Chicago Bulls official told me long ago, “To coach Michael Jordan you gotta have some shit with you, and Phil has got some shit.”

Jackson, of course, loves all this attention. He has long been known for “seeding” information (Jackson’s word) in the media about opposing players and teams. Usually, Jackson has used such seeding to “tweak” an opponent or to set the agenda for officiating. This time, though, Phil was planting the idea that he might like to coach James.

Why should we be surprised then that this “love buzz” picked up momentum this season with James’ impending free agency? A source close to Jackson and girlfriend Jeanie Buss even insisted in February that James’s “people” sent return overtures through a Los Angeles agent during the season.

Infuriating as it was for Cavs fans, those overtures, however inappropriate, made sense. At age 25 with immense talent, James has more power than any free agent in hoops history.

That’s why the New York Knicks and New Jersey Nets and Chicago Bulls have cleared cap space to make things comfy for James should he decide to leave Ohio.

But James has also made it clear that this isn’t about money. He’ll go where he wants to go, whatever it takes to win it all.

Understandably, rumors and speculation of the Jackson/James attraction heated up after the Cleveland Cavaliers’ strange collapse in Game 5 of the Eastern Conference semifinals against the Boston Celtics.

It was made all the more tantalizing by the refusal of Lakers owner Jerry Buss to offer Jackson a new contract. Even worse, Buss declined to dispel Jackson’s revelation that the team is going to ask him to take as much as a $5 million pay cut from his $12 million annual salary, the highest pay for any coach in any sport.

So now, even as the Lakers are battling the Phoenix Suns in the Eastern Conference finals, the speculation rages so greatly that Jackson had to stop this week and clear things up for us.

No, he won’t be coaching the Chicago Bulls.

Yes, he’d like to “have a vodka” with the new owner of the New Jersey Nets, Mikhail Prokhorov, saying Prokhorov seems “like a very interesting young man.”

Jackson obviously enjoys being the prettiest girl at the dance with all the boys fawning over him. At the very least, it allows him to play some mind games with Jerry Buss.

Before his team lost Game 4 of the conference finals Tuesday night, Jackson playfully entertained reporters questions about the situation.

When reporters asked if he’d be at home in Montana when next season starts or on the bench of an NBA team, he replied, “Home is where the heart is, right?”

A reporter accused him of being cagey, and Jackson quipped: “I’ve always had problems committing.”

Reminded that he could end the speculation, Jackson said, “I’ll leave it open and just say, as of now, I have not made up my mind about coaching or not coaching next year. That’s all I can say really. Truthfully.”

“I just can’t imagine [coaching another team],” he said. “Not to say that it’s beyond your wildest dreams, [or] that it never would happen, [because] the strangest things do. But it’s just not part of my conscious thought. Right now we’re down this path [against] Phoenix.”

Jackson has played this coy stuff before, in 1998, as he sparred with Chicago Bulls owner Jerry Reinsdorf and GM Jerry Krause, who had notified him his job would end after the season.

Back then Jackson had Michael Jordan lobbying furiously to force Reinsdorf to bring Big Chief Triangle back for another year. Jackson himself did an amazing job of wrapping the media and his team around his finger.

And Jackson walked away anyway, breaking Jordan’s heart in the process.

Jackson has let it be known that he wants to coach next year, that he might consider another team. In so doing, he has spread hope across the NBA for those who crave what he has to offer.

But that 1998 disappointment serves as fair warning for James, for Bryant, for the fans, for Jeanie Buss, for anyone who places their hopes in Phil Jackson.

He just might walk away with your heart in his pocket.