Let's keep it together

Let's keep it together 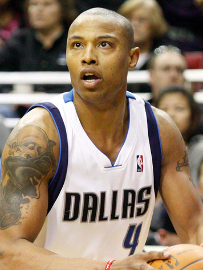 I’m on vacation now, but wanted to blog a little about what’s going on with me and what happened the past month.

Let’s talk about San Antonio… Obviously, the first-round defeat in the playoffs was a big disappointment. In the postseason, matchups matter a lot and I feel the Spurs were a extremely tough matchup for us. Besides, they were healthy and had a guy in George Hill that had his coming-out party. He did a great job. What sealed the deal was our inabilty to win one on the road  after losing Game 2. It was a tough moment for us, but you have to respect this San Antonio team. Tim Duncan, Manu Ginobili, Gregg Popovich… There’s a lot of talent there.

We’ll have an interesting summer now. I would like to continue to play for a winning franchise like the Mavericks. I have no  more years to waste on rebuilding or something like that. I look forward to being in a great situation and that’s what Dallas has  been to me. The fans have been awesome. They welcomed me with open arms and I had a great time out there.

All that said, I’m aware that it’s all going to depend on what Dirk Nowitzki decides. You kind of feel what he wants is to stay a Maverick for life, but you can never know for sure. You just have to wait and see what happens during free agency. If you ask me, I would like this team to stay together. We’re not that far off. We could return next season with the exact same squad and compete for the title. We have the experience, leadership and everything else in place to make it happen.

I’ve been spending time with my family, working out a little to stay in decent shape and catching up on movies that I wasn’t able to see during the season. I saw Shrek and Robin Hood the other day and definitely plan to see Hot Tub Time Machine too. That one is going to be good.

This offseason I plan on working on my ballhandling and my isolation game a little bit more. There’s always room for improvement and I’m one of those who think that as you get older, you have to work more. When you get to a certain age, you can’t rely on your athleticism as much. I’m still in the prime of my career and still have a lot of athleticism, but I want to rely  more on skill than anything. I have to add more dimensions to my game. That’s my goal for the summer basketball-wise.

I follow all my former teams and like to see them doing well, so I was very happy to see the Wizards winning the No. 1 pick. They are now going to have a young star like John Wall or Evan Turner to start the franchise up. The expectations are that they are going to pick Wall and I’m not surprised. He’s going to do exceptional things in the NBA, I’m sure. He’s going to be a household name that’s going to put people on the seats. He has greatness written all over him.

Before you ask, I have no idea what’s going to happen with LeBron. Like the rest of people, I’m just looking forward to seeing  what happens. Even though I’ve had tough battles with him in the playoffs, I wish him nothing but the best. He’s an unbelievable athlete and talent. Whoever gets him, congratulations!

That’s all for now. Talk to you soon. Bye!