Ekpe Udoh: "The year off made me realize how much I loved the game"

Ekpe Udoh: "The year off made me realize how much I loved the game" 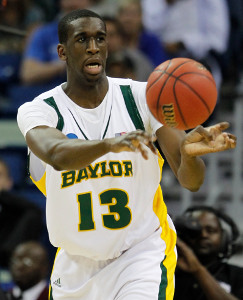 What do you think was the key in your improvement from your last year at Michigan to this season at Baylor?

Ekpe Udoh: Really working hard. That year I took off, I wasn’t taking things for granted. With the coaching staff, we really hit it hard.

That year when you were not playing in actual games… How did you deal with that?

EU: It was tough. You really had to stay focused. I just realized how much I loved the game. You always love the game, but sometimes you don’t cherish it as much. So that year off… I realized this was my business.

What was the feeling when you were able to play in a real game for the first time with Baylor after one year?

EU: I was a little nervous, but my teammates did a really good job with me. Out chemistry was very strong… It was a great time.

You went through the interviews with teams in Chicago during the draft combine. What was the strangest question you had to answer?

EU: Strangest question? One GM asked me, “Do you hate to lose or do you want to win?” He said, “You have to think about it.” That was in my mind for a little bit. It’s a little bit in my mind now.

But what did you answer?

What was the atmosphere like among players at the draft combine? Are you able to make friends in that context or is it too competitive of an environment for that?

EU: Everybody was cool and having a good time. Really enjoying the experience and taking it in. That’s something you only do one time. It was a blast, a priceless experience.

What do you think you will have to prove in the workouts leading up to the draft?

Which teams are you going to work out for?

EU: I had a workout in Houston. I’m going to Indiana, then I have the Raptors. Then a West Coast swing with Golden State, Sacramento and the Clippers. Then I have Utah, Minnesota, New Orleans, Memphis, Oklahoma and Detroit.

Are you feeling nervous or anxious about it?

EU: A little bit, but I’m ready for it. It’s what we do. We play the game of basketball and that’s what I love. It’s a good opportunity to go out and show what I can do.

What is the key to being a great shot blocker?

EU: Timing. You can be athletic, but if you don’t have the timing it’s not going to work out. Timing is the biggest aspect.

EU: Yeah, my main thing is playing defense. That’s what I love to do. I love to play defense. Offense is always going to be a work in progress. I’ll keep working on it.

Since you are already 23, you know some people talk about how you don’t have as much upside as other players in the draft. What do you think when you hear that?

EU: I’m old, but we still play game the same. Upside or not, it’s about what you do.

If you read or listen to the Detroit media, it seems like they are in love with you there. How do you feel about the Pistons?

EU: The Pistons are a great team. They had some injuries, but I think they are going to come back because Dumars does a great job with that team.

Your parents are from Nigeria. Have you ever been there?

EU: I have been there once. It was nice, but it was different. You have to appreciate what you have in America because in other countries, it’s just not the same. They are not as fortunate.

EU: (Laughs) Oh man, that is tough! You know, I’m neutral. I’m not going to pick anybody. I don’t want to go against the Black Mamba, but the Celtics are playing great basketball right now.