Gordon Hayward: "I'm most comfortable out on the wing"

Gordon Hayward: "I'm most comfortable out on the wing" 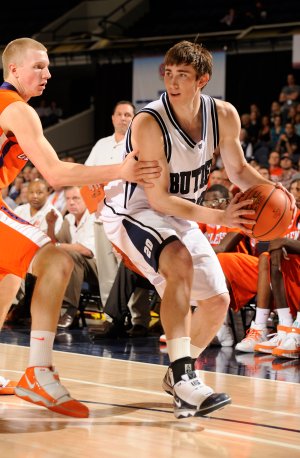 You took some time to make a decision about the draft. What were those days like when you were trying to make the decision?

Gordon Hayward: It was just a tough decision because I am leaving such a great place in Butler University. There’s great people there. You’re kind of leaving your best friends, your teammates. That was the only reason why it was so tough for me. But from a basketball standpoint, it was pretty easy.

When did you first think you had a chance to play in the NBA this year?

GH: I don’t know if there is a point during the season. I just plan for the next game. I really didn’t have to think about the NBA until after the season was over. I sat down with my father, who had gathered some information and kind of told me what was going on. I kind of went from there. There was not a particular point where I thought, “I can do this.”

The fact that there could be a lockout in the NBA next year affected your decision in any way?

GH: Well, I think that you have to factor that in a little bit. But for me, it really wasn’t part of the decision process at all. For me, it was about realizing my dream to play against the best competition day in an day out.

Did your coach at Butler, Brad Stevens, adviced you to lean one way or the other?

GH: No, he didn’t at all. He was supportive either way. He told me to gather as much information as possible and that he would me help if I needed to talk to anyone. He didn’t sway me one way or the other.

How’s been the workout process so far?

GH: It’s been good. I’ve only had a couple of workouts so far, but they went well. I’m in the middle of a tour throughout the U.S. going to different teams, just trying to show what I can do.

Do you think these workouts give you a setting where you can show your strengths?

GH: I think so, yeah. It’s kind of difficult because I feel one of my strengths is playing the 5-on-5 game, make the right pass and the next pass. Some of these workouts sometimes are about 1-on-1, 2-on-2, 3-on-3, things like that… And I don’t know if that shows what a player is capable of doing. I think it kind of showcases the skills that you have and that type of thing. I hope I can impress some people.

What do you think is going to be your position in the NBA?

How do you feel about the Mike Miller comparisons?

GH: I think it’s hard to compare guys to specific players in the NBA no matter who it is. If you are going to compare me with a player like Miller that’s had a successful career, that has to be a good comparison. I think it’s hard to compare people because everyone plays basketball in a different way and there’s not one player that’s alike the other. But I mean, he’s a great player and it’s good to be compared to him.

Some players don’t want to continue their NBA careers in the same state where they grew up or played college basketball. How would you feel about playing in Indiana during your pro career?

GH: It would be something special, but I think anywhere in the NBA would be very special to me. It’s not something that I’m too worried about. I’m just going through these workouts and playing as hard as I can and whatever happens, happens. I’ll make the best out of it.

GH: Both are exciting, but it’s a little different because when you’re going through the draft process it’s all about you and all about the individual. The journey through the NCAA tournament was all about our team and no person was held higher than another. There’s a lot of differences between the two processes, but they are both very exciting. You’re only going to do it once in your career, so you try to make the best of it.

Is there any chance that Butler returns a Final Four ot that’s a once-in-a-lifetime thing?

GH: They can definitely return. They have a great program and are doing things the right way. We have kind of started something good there and I’m confident they’ll be good next year and hopefully return to the Final Four.

I’ve read that you played tennis and were pretty good at it. Do you think you could have played professionally?

GH: It’s hard to say because with tennis you have to start very young and really concentrate on tennis. It would be hard to say. I think maybe if I had quit basketball and played only tennis, then there might have been a chance. But there are some great tennis players out there and it would have been really hard.

What type of tennis player you were? Great serve, right?

GH: Yes, serve and volley. I used my height to my advantage.