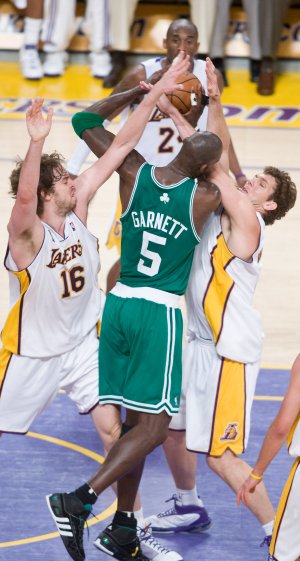 The Lakers and Celtics have traded wins in the first three games and it seems like this trend might continue on to a seventh game back in L.A. The stories have changed from game to game. Kobe and Gasol in Game 1. Ray Allen and Rajon Rondo in Game 2. Derek Fisher and Lamar Odom come up big in Game 3.

Also, I said this series would be ugly and so far it has not disappointed.

Dr. James Naismith was looking down at Game 3 and he couldn’t be excited about what he saw. This might have been the ugliest Finals contest since we had to see OJ Simpson ride around Los Angeles while watching the Knicks and Rockets.

The Lakers won a huge game with both teams shooting a combined 6 for 33 from the three-point line. At one stretch in the third quarter, I thought there were leprechauns on both rims. At first, I thought both teams were just very good defensively.

The Celtics were the better defensive team, but offense was a big issue for them… It was atrocious. I mean, the worst I have seen since that Knicks–Rockets series. The shots they were getting were the same as Game 2 and they failed miserably.

The Lakers won with gutty and timely play when they needed it most. It was Fisher to the rescue again. He scored 11 points in the fourth quarter and that was the difference in the game. Toss in a big drive and bucket by Odom and the Lakers showed confidence and toughness down the stretch while the Celtics looked intimidated and scared to take first-look opportunities on offense.

It is pretty obvious after three games in this series that: 1. The Lakers will dominate the glass with Gasol and Andrew Bynum; 2. Kobe likes everyone except Tony Allen guarding him; 3. Allen and Paul Pierce have got to score for the Celtics to have a chance to win; and 4. Kevin Garnett and Big Baby Davis might be a better combo than Kendrick Perkins with Garnett.

The Lakers have been the more consistent team so far in terms of committing to the offensive glass and that will be the deciding factor in the series. With Kobe, L.A. will always win uglyball because he is the only player in the series that can create his own shot consistently. Pierce had that ability, but it seems like he will not be a factor in crunch time with Bynum and Gasol building a wall behind Artest to negate his ability to get to the rim.

So the pressure falls to Garnett and Davis. They had their best games against the Lakers Thursday and will need to continue to be a consistent scorers inside because that’s all the Celtics can offer.

Boston should take a cue from Bryant’s demeanor when it comes to staying even keel. The Celtics seemed to enjoy their Game 2 victory too much. Pierce informing the Staples Center crowd that the Celtics would not be coming back to L.A., Rondo having everyone anoint him as the next Bob Cousy and Allen telling every interviewer in sight why he is a great shooter with his pre-game regimen of shooting three hours before tip-off…

Well, Pierce should have been quiet because he has not shown up in the series yet, Rondo will not be a great point guard until he learns to shoot a mid–range shot and Allen has to get back to the Bible of what most great shooters live by… The only people that can knock you off rhythm in regards to your shot are yourself and your teammates when they are not getting you open to get the ball.

Allen’s penchant for shooting three hours before a game probably cost him the great rhythm and confidence he showed in Game 2. The key for any shooter is to get a great rhythm. Once there, stop and walk away. Maybe that’s why Allen has followed up every good game in the 2010 playoffs with a bad one. Just a hint from one shooter to the next!

Also, those extra three hours at his age could best be served by lying down and resting those legs, notably when you are chasing the best scorer in basketball. Allen should never shoot 0 for 13, especially when a majority of those shots were the same looks he had Tuesday.

Things I expect for the next few games:

– Doc Rivers doesn’t go all the way to the well again with Allen if his shot continues to miss its target. He will give Nate Robinson and Michael Finley a look early to see he can use them late.

– Bryant will not to continue to be off with his shot. The Celtics have to be worried the Lakers won with Bryant going 1 for 6 in the fourth quarter.

– Rondo will take that 14-foot shot the Lakers are giving him.

– Odom and Fisher will become more aggressive offensively based on their good Game 3 efforts.

– Big Baby Davis plays more with Garnett down the stretch of games.

– I think the officials have called this series too tightly and that is contributing to this slow pace as well. Too many key players are sitting on the bench with foul trouble, so I would expect the officials will start letting the players play and maybe not be so quick to blow a whistle when the physical contact has nothing to do with the play!