Pablo Aguilar: "If I'm a second-rounder, I'm staying in the draft"

Pablo Aguilar: "If I'm a second-rounder, I'm staying in the draft" 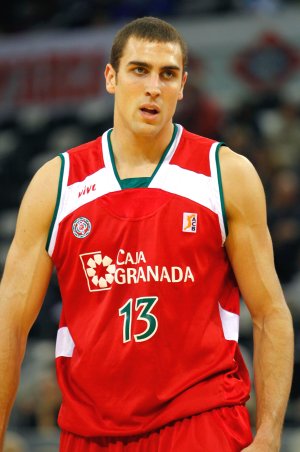 These have been your first days in the States. How shocking has the experience been so far?

Pablo Aguilar: It has been very shocking, to tell you the truth. It’s my first time in the United States and I’m getting the chance to work out against the best, so it’s been incredible. It’s a very good experience and I’m lucky enough to have Nacho (Gomez, from his agency) by my side, who’s helping me out all the time. The experience has been great. It’s probably the best experience in my life. I know I’m never going to forget about this. I still have 4-5 days and two workouts left and I’m going to try to do my best.

What has been the most shocking thing so far?

PA: I don’t know. I’ve been shocked by the whole thing, so I can’t tell. Off the court, probably the lifestyle they have. On the court, the courts themselves, how serious they are about their business… Everything.

PA: Better than expected. It’s my first time leaving Europe and all of a sudden I come here with everybody speaking so fast… But anyway, I’m doing well. I can talk with people and ask for stuff when I go out.

What’s going to be the main factor in your decision to stay in the draft or pull out?

PA: It depends on how the workouts go and the vibe we get when we finish here. That’s going to be the main thing. Depending on how things go, you can go in the second round or not get drafted at all.

Being a second-round pick would be good enough, right?

PA: Being in the second round would make me proud because that would show they value my day-to-day work and what I’m doing here in the United States. If I’m a second-rounder, I would probably stay in the draft – even if I’m in the 45-to-50 range.

No matter what happens in the draft, I guess your plan is to play in Europe next year.

Is there any NBA team that draws your attention more than others?

Have you heard anything from Real Madrid? (Aguilar plays for Granada, but Real Madrid owns his rights and has a chance to claim him this month).

PA: Not yet. And I don’t know when I will hear from them. They just finished their playoffs and I don’t know anything. And anyway, my agent will probably get the news first. He’ll tell me what’s up and we’ll move from there.

You have been compared to (former Raptor) Jorge Garbajosa. What do you think about that?

PA: He’s great. He’s one of my idols. I’m very pleased by the comparison, but I’ve always said there’s just one Jorge.

If you had to describe yourself as a player in a few words, what would you say?

PA: Young, hungry, athletic, half decent shot and, most of all, a big fan of basketball.

Are you holding out hope that you could be at the World Championships with Spain this summer?

PA: You never lose hope. Even if I don’t make the final roster for the World Championship, I would like to be in the group of 14-15 players that practices with them before the tournament. That would be the best thing ever already this year. You always hold out hope. If the phone rings, it’ll be welcomed.

Have you heard from Sergio Scariolo (Spain’s head coach)?

PA: No, not yet. They have not told me anything. I guess that as long as the Spanish League is still in play, they will not tell me anything. I don’t know what’s going to happen, if they are going to call me or not.