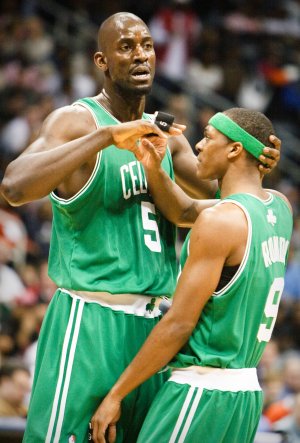 This series is looking like 2008 all over again. The Celtics are close to making their claim for a missed threepeat correct. Kevin Garnett’s injury last year has been widely discussed among Boston players and fans as the only reason the Celtics are not one game away from their third straight title.

The Phoenix Suns eliminated them in successive years because Kobe Bryant was forced to become ultra aggressive and the others stood and watched. In 2008, we saw Pau Gasol and Lamar Odom get roughed up and the Lakers tumbling.

Here we are in 2010 and we are witnessing a disturbing trend again with Kobe taking most of the shots. The Lakers are not very good when they stand and watch Kobe – especially against a frenetic defense which Boston employs.

Boston has held the Lakers to 87.5 points a game over the last two despite Kobe averaging 35.

Critics will start to put the blame on Kobe, but he really tries to stay away from dominating the ball. He was forced to be aggressive because the triangle offense has officially been forced out to 15 to 18 feet away from the basket. Without any teammates to create their own shot in those areas, it falls on Kobe.

This was the Celtic plan and the Lakers have fallen into it. If they are to get out of this jam, Gasol cannot grab 7 offensive rebounds and get only get 3 free-throw attempts. Those opportunities should be putbacks or trips to the free-throw line.

What’s occurred for the Celtics is that Paul Pierce has finally arrived and, as I said before the series, Ron Artest struggles against him. Doc Rivers is now employing Pierce in two-man game scenarios and Artest’s big body cannot squeeze over the screens… So Pierce has Gasol, Odom or Andrew Bynum at his mercy.

Throw in now the consistent play of Garnett and the Celtics have somehow regained a second wind while the Lakers look tired.

The one thing that has become pretty obvious is that the Lakers’ bench has gone silent. I can argue it’s not their fault. Throughout his career, Phil Jackson has notoriously  gone against using his bench the deeper a Finals series goes on. Shannon Brown did not help the cause after Game 4 when he commented that the starters never want to come out of games and Phil rewarded him with no time. I guess you can still send messages to players even though it’s the Finals.

I picked the Celtics to win this series in six games and they have an opportunity to close it out exactly as I said, but this close-out will be the hardest they ever faced because now they are talking about the defending champions on their home court.

Game 6 will be the game of the series because the Lakers are obviously facing elimination, but the Celtics do not want a Game 7 having to deal with the best closer in basketball – Kobe Bryant.

WHAT TO LOOK FOR IN GAME 6

– The Celtics will continue to run their offense through Paul Pierce and force Gasol, Bynum and Odom to step out and defend their two-man game.

– Look for the Celtics to continue to guard Kobe one on one and not allow him to create opportunities for Gasol, Odom and Derek Fisher.

– The Celtics have established a good rotation off the bench and they will have to give a solid 14-15 minutes as a group to put the Celtics in position to win Game 6.

– The Celtics cannot afford to have 17 turnovers and that responsibility falls to Rajon Rondo, who had 7 in Game 5.

– The Lakers have to find a way to get Gasol better post-up positions. He is catching the ball consistently 12 to 15 feet from the basket.

– Get Artest a look or two early against Pierce, who right now is using all his energy on offense.

– Decide if Bynum can actually play because they could be losing valuable production if Odom can get a rhythm early from starting. Bynum had 1 rebound in Game 5 and no blocks.

– Get some home production from the bench to allow the starters to be able to close the fourth quarter, where they have failed in the last two games.

– The Lakers will not win if they do not have three players with 15 points or more. Kobe cannot and will not beat the Celtics alone.

Game 6 will be the best game of the series and I am excited to see it Tuesday night!