We have a classic

We have a classic 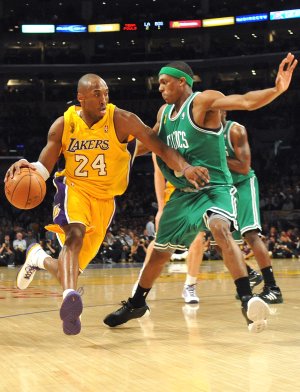 Basketball is such a weird sport at times.

The Celtics knew as well as anyone that the championship trophy, shirts and hats were somewhere in the Staples Center, yet they played the first half like they were in no hurry to force the NBA to bring them out. I kind of compared their situation to Christmas, where you know there are some gifts in the house, but you have to wait till morning to get them. You were on your best behavior because you knew the morning would bring great happiness and satisfaction.

Well, the first half forced whoever to put those gifts back on the truck and bring them back for Game 7. The Celtics played like a team expecting to lose and the Lakers took full advantage with a solid first half. As I expected, Kobe Bryant was aggressive early and hoping for some help. He got it from Ron Artest, who seems to always play well in the sixth game of a series. He had 24 in the close-out win against Phoenix.

Coming into Game 6, I believed the Lakers needed double-figure scoring from two others besides Kobe. Artest stepped up in a big way and the Lakers’ bench was tremendous outscoring Boston 15-0 in the first half that alone was enough to make Doc Rivers cringe.

The Celtics reverted back to ugly offense again – mainly because of turnovers and sloppy defensive play. They shot 33 percent and only grabbed 13 fewer rebounds than the Lakers.

The most disturbing stat for Boston was that the Lakers had 12 steals, which means the Celtics were careless with the ball.

The second half was no different because the Celtics continued to miss point opportunities early in the third quarter. The Celtics missed three layups that could have made it interesting, but this game was never a contest and maybe this will allow Doc Rivers to throw out the film and tell his team to just worry about game 7.

It is very difficult to beat great teams three times in a row and that’s what I am sure Rivers will preach in practice.

The Lakers, on the other hand, have to feel ecstatic about winning a game without playing heavy minutes.

Artest, Lamar Odom, Shannon Brown and Sasha Vujacic were huge and that was really the difference in the game. The Celtics bench did not score its first basket until 9:56 left in the fourth quarter on a Nate Robinson layup.

WHAT TO EXPECT FOR GAME 7

– The Celtics will start extremely physical, especially knowing Rasheed Wallace and Kendrick Perkins, if he plays, cannot be penalized because of a technical foul and miss a game.

– Ray Allen and Paul Pierce will not shy away from taking 20-plus shots in a do-or-die game.

– Glen Davis or Wallace will have to provide a double-double to counter another explosive run from the Lakers bench.

– Nate Robinson will get every chance imaginable to see if he can provide a hot hand as well.

– Kobe Bryant will not succumb to another poor seventh game and Boston will expect him to take 25 shots.

– Pau Gasol plays well at home. Look for him to try and get going early.

– The Lakers found a good defensive rhythm and plenty of film study should be expected to try to repeat that effort.

– The Lakers also had three players in high double figures and I truly believe they need to duplicate the same thing in Game 7.

I expect the tempers will be short-fused and that is why I expect the officials to grab control of the game early.

We finally have a Game 7 and this will be a classic.