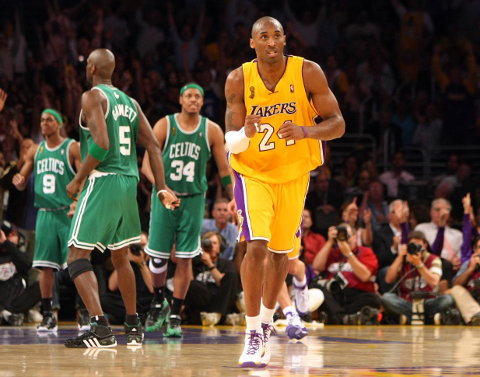 I said coming into this series that the Finals would be ugly and Game 7 showed us what ugly is all about – especially when two excellent defensive teams hook up. Now don’t get me wrong because I have watched every minute of every game and I have enjoyed the series immensely. Why? Because intensity is what you crave when you watch two teams giving every ounce of energy and for that we have to thank Phil Jackson, Doc Rivers and their fine players.

Boston had to win a game in L.A. and they did. The Lakers needed to grab one in Boston and they did. But in Game 7 both teams knew all too well that home court meant nothing. What counted more than anything was pride and desire to accomplish the ultimate goal of being the last team standing.

– First, they stayed tough defensively when they could not buy a shot early and crashed the offensive glass for make-up opportunities.

– Ron Artest stepped up offensively when they needed it the most. His defense on Paul Pierce was great as well.

– Kobe Bryant trusted his teammates when he obviously was not going to be the offensive hero in this game.

– Phil Jackson stayed calm and didn’t allow his team to stop fighting when it was obvious their confidence was wavering.

Why the Celtics didn’t?

– They missed Kendrick Perkins‘ rebounding early when the Lakers were attacking the offensive glass at a relentless pace.

– Ray Allen could not make open baskets when the Celtics were building a lead, which should have been high-double figures.

– Kevin Garnett got in foul trouble early to negate a good offensive start.

– The Celtics started fouling too early in the fourth quarter and allowed the Lakers to get to the free-throw line consistently.

Those were the main keys to the final game of an amazing series, but there were some underlying stories that you have to mention too.

For example, Andrew Bynum. He has showed to me that he is learning how to play through pain from Kobe Bryant. He did it on one leg and still did some harm.

Kendrick Perkins showed heart by doing everything he could to stay positive about a knee injury that we all knew would keep him in street clothes.

Artest, despite being reduced to role-player status, showed heart by not succumbing to poor play at times.

Rasheed Wallace played like he had forgotten all about a poor regular season.

Sadly for the Celtics, Wallace wasn’t enought to cope with the Lakers’ length. I felt coming into this series that their length would be a problem and it was obvious in every loss for Boston. That really jumped out in Game 7 with 22 offensive rebounds by the Lakers.

If you take away rebounding, Boston’s defense was the best I have seen the whole series. But the defense does not end until you get the ball.

All along, it looked like this would be a close game. I really am glad I am not a die-hard fan of either team because this was tense enough to make a grown man cry and it is obvious that players on the losing team will be rehashing what-ifs for the rest of their lives.

But that’s the NBA: Somebody has to be in pain for others to experience the joy of winning the whole thing.

Congratulations to the Los Angeles Lakers for fighting through some tough times in Game 7 to win back-to-back titles and to Kobe Bryant for giving his teammates confidence when he needed them most.