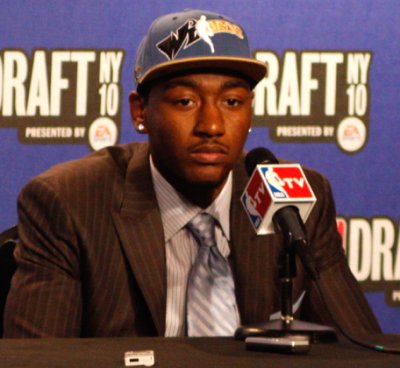 It’s been suggested that it takes three years to evaluate a draft, but who has that long to wait? After 24 hours here is a look at some of the perceived winners and losers in the draft.

No question, there will be players who weren’t as highly regarded who prove to be better than where they were drafted.

This draft as most things in the NBA was dominated by LeBron James. Miami and Chicago joined the New York Knicks by ridding themselves of contracts, making more cap space to sign not only LeBron but another prime free agent as well.

So there are many questions, including how in the world didn’t the University of Kentucky make the Final Four with five first-round draft choices?

Here’s our early thoughts, which should be written in pencil due to the uncertain nature of the draft. Included are trades made within the past week as well.

Washington: There was no suspense in taking John Wall, but he is the type of player who can inject some life into what has been floundering franchise. Of all the players in the draft, he is the one who projects as a future All-Star. There could be other All-Stars out of this class, but none with the can’t-miss tag like Wall. He can run a team, defend and has NBA quickness and athleticism. Wall will need to improve his perimeter game, but that can be said of many of the players already in the league.

Even though it couldn’t be announced until July 8, multiple outlets reported that the Wizards acquired Chicago guard Kirk Hinrich and first round pick for a future second round selection.

Hinrich was a great mentor to Derrick Rose in Chicago and is also a top defender. If Gilbert Arenas remains with Washington, (and it will be difficult to trade that contract) the Wizards could give a lot of three-guard looks. This is a great acquisition for the Wizards.

If the Wizards get anything from another acquired first rounder (No. 23) Trevor Booker of Clemson, that’s an added bonus.

Sacramento: The Kings went big with the draft and trades and took the biggest high risk, high reward selection in DeMarcus Cousins at No. 5. Remember last season they took the NBA’s Rookie of the Year Tyreke Evans with the No. 4 pick. Cousins gives them toughness, but there remain questions about his maturity. Hassan Whiteside was good value at No. 33 and is a young frontcourt performer probably not ready to contribute right away. Sacramento also acquired Samuel Dalembert from the 76ers. Dalembert has had two straight subpar seasons after averaging a double-double in 2007-2008. This is the final season of his bloated contract so he will have motivation to perform. Plus if he doesn’t work out, the Kings will get needed cap space after this season.

The combination of Jrue Holiday and Turner should also give the Sixers a solid defensive backcourt.

In addition the Sixers rid themselves of inconsistent center Dalembert by sending him to Sacramento for Spencer Hawes and Andres Nocioni. Hawes has been a disappointment and if he can give the Sixers 20 solid minutes a game, that would be an upgrade. New coach Doug Collins values toughness. Nocioni gives the team the toughness that has been missing since the trade of Reggie Evans after the 2008-2009 season.

The Sixers could field one of the smallest lineups in the NBA if Thaddeus Young starts at power forward and Elton Brand is the center, but this will be an athletic unit and one that could contend for an Eastern Conference playoff spot.

Los Angeles Clippers: With last year’s first overall pick Blake Griffin, ready to begin his NBA career, this could be among the more improved teams. Wake Forest’s Ali-Farouq Aminu was a solid frontcourt pick and then the Clippers gave themselves great backcourt depth with trading a future No. 1 pick for the rights to Kentucky’s Eric Bledsoe at No. 18 and then selecting Oklahoma’s Willie Warren at No. 54. At this time last year Warren was projected as a lottery pick and even though he had a disappointing second season, is a great value choice.

Oklahoma City: The Thunder made a slew of moves, including acquiring Daequan Cook from Miami, who should provide three-point shooting and a future No. 1 from the Los Angeles Clippers after trading the rights to No. 18 pick Eric Bledsoe. In trading for Kansas center Cole Aldrich, the team gets a center who could start. Another solid move was acquiring 7-0 German center Tibor Pleiss, who was selected No. 31 from the Atlanta Hawks via the New Jersey Nets in exchange for cash considerations. Even if he doesn’t play this season, Pleiss is a player to watch for the future.

This is a team that didn’t have any moves that may wow others, but have improved themselves while giving up relatively little.

Milwaukee: Acquiring Corey Maggette from Golden State gives them a proven scorer although he will never be on anybody’s all-defensive team. The expected addition of Chris Roberts-Douglas would be another good move by GM John Hammond. In taking VCU’s Larry Sanders with the 15th overall pick in the first round, the Bucks get a player who can contribute immediately on defense, but is raw offensively.

San Antonio: The Spurs took one of the more unsung performers, shooting guard James Anderson of Oklahoma State. If 25-year-old Tiago Splitter can be signed, the Spurs will continue their rebuilding while contending with young players.

Detroit: The Pistons badly needed frontcourt help and addressed the need by drafting Georgetown’s Greg Monroe with the seventh pick. Monroe has a high basketball IQ, is a great passer but his athletic ability has been questioned. He appears a good fit for Detroit but must show that he can bang down low on a consistent basis. Point guard Terrico White provides backcourt depth.

New Jersey: Most feel that Derrick Favors could be a good NBA player, but nobody knows for sure either if or when this will happen. The consensus is that he will need a few years to develop after playing just one year at Georgia Tech. Most NBA people are on the record as liking this choice, but he will need time to develop. Second first rounder Damion James fits into the mix at small forward.

Minnesota: In selecting Wesley Johnson, the Wolves received a player who is already NBA ready and was a safe pick. The Wolves also improved their lot at two-guard with the acquisition of Martell Webster. The final makeup of this team won’t be known for sure until some anticipated deals are made, possibly with Al Jefferson being shopped.

Waiting on LeBron: Cleveland didn’t have a pick, but their entire destiny revolves on being able to keep LeBron James. If not, they will be a major candidate for a high lottery pick next season.

Golden State: The Warriors chose 23-year-old forward Ekpe Udoh from Baylor with the No. 6 pick. That is maybe a little high, but not outlandish since he was considered a likely Top 10 pick, and he does come in with a reputation as a defender for a team that needs plenty of help in that area. The Warriors rid themselves of Maggette’s contract but also his offense and acquired Charlie Bell and Dan Gadzuric. It’s hard to see improvement in this team’s immediate future.

Atlanta: The Hawks didn’t seem to improve themselves appreciably but first rounder Jordan Crawford could be a rotation player if Joe Johnson leaves via free agency.

Charlotte: The Bobcats made the playoffs this past season, but need plenty of help and didn’t have a single pick.

Denver: No picks and the Nuggets need depth.

New Orleans: It’s not to say that forwards Craig Brackins and Quincy Pondexter were bad picks, but one wonders whether either elevates the Hornets.

These three teams could turn out to be big winners, depending on what is done in free agency.

Miami: The Heat cleared cap space by trading guard Daequan Cook and their first round pick to Oklahoma City for a second round choice. Miami has the ability to sign two max free agents, and it could be three if they decide to trade Michael Beasley.

New York: The Knicks are also banking on signing high profile free agents. They gutted their roster and look to sign two max free agents. As for the draft, second rounder Andy Rautins has one NBA ready skill as a shooter and Landry Fields is a versatile player, but neither is expected to make a serious impact. It’s all about free agents for the Knicks.

Chicago: The Bulls paid a steep price by trading Kirk Hinrich, but now are in a position to possibly sign two max free agents. With Derrick Rose, Joakim Noah and Luol Deng, there is a good nucleus here that should be an attractive situation for a free agent looking to win.

Random thoughts on other teams

Dallas: The Mavs have need for a shooting guard and whether first-rounder Dominique Jones (21.4 ppg at South Florida) can fill that bill will be one of the interesting training camp questions.

Houston: In selecting Kentucky’s Patrick Patterson at No. 14 the Rockets got an experienced player who could fit into the rotation.

Indiana: First rounder Paul George of Fresno State provides shooting from the small forward position, but the Pacers are still in need of a point guard.

Los Angeles Lakers: While the draft isn’t where the Lakers will determine if they can three-peat, they took a player with great upside at No. 58 in Derrick Caracter, who was considered one of the top players in the country coming out of high school, and rebounded nicely at UTEP after struggling at Louisville. Other second rounder Devin Ebanks will vie for a roster spot.

Memphis: The Grizzlies got in this person’s opinion, the best player outside of the Top 10 when they took Kansas freshman Xavier Henry at No. 12. He was the best pure shooter in the draft.

Orlando: In picking Daniel Orton, a player who averaged 3.4 points per game at Kentucky, the Magic drafted on potential for a player who could have been a lottery pick next season had he stayed in school.

Phoenix: Will second rounders Gani Lawal and Dwayne Collins be able to immediately contribute? It’s hard to say, but this team enjoyed success last season despite its meling owner.

Portland: As usual there were plenty of moves, including sacking GM Kevin Pritchard and trading with Minnesota, acquiring Luke Babbitt (with the No. 16 pick) along with Ryan Gomes. First rounder Elliot Williams adds backcourt depth, but the Blazers still need more frontcourt strength and even though there was a flurry of moves, one wonders how much better this team got.

Toronto: The Raptors selected a player in Ed Davis who didn’t have an overwhelming college career at North Carolina. Can he be the eventual successor to Chris Bosh if (most likely when) he departs in free agency?

Utah: If anybody can prosper in Jerry Sloan’s system it’s first rounder Gordon Hayward. This was a player picked by the right team, although it may take time for the Butler forward to adjust to the NBA.