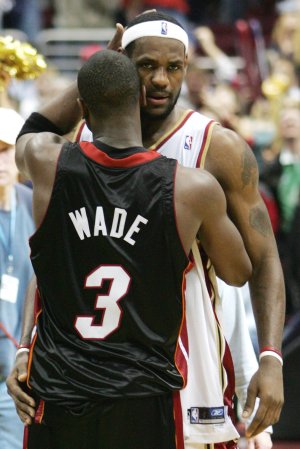 The draft is over and now we are preparing for the biggest free-agent smorgasbord in NBA history.

I have no idea what the big catch King James is thinking, but I suspect he already knows what he is going to do. His decision will set off a frenzy of signings and trades. The NBA has proved once again that it is a 365-day league and this theater is a prime example. There are unrestricted, restricted, early termination contracts, etc… So the bottom line is these players have a chance to become free to shop their skills… And here is my Top 25.

I really like his all around abilities. I would like him to stay healthy and if so can easily score 15-plus points off anyone’s bench. Outlaw is a runner and leaper, so look for him to focus on teams that run and spread the floor.

Hard worker with limited all-around skills, but he gets the most out of his body than most players. Would be a good physical presence off the bench for a number of teams. I expect loyalty will keep him in Miami unless they secure one of the Top 6 players, thus having to renounce signing him.

Had a tremendous season and proved to us again that Steve Nash can turn anyone’s career around within months. Frye is a center who shoots three-pointers and that trait will get him a nice contract. The Suns are determined to keep him and I believe Frye is determined to stay in his hometown. He remembers the struggles in New York and Portland.

He has won me over with hard work and mental toughness. This kid is not scared to fail and that’s a great commodity for any team to have. I don’t think he can leave Orlando and start, but I do believe on the right team he could become a top sixth man in this league. He is one of the best spot-up shooters in the league and I expect him to get a lot of attention if Orlando is willing to let him go.

There are a lot of free agents this year that can become great bargains and here is one of them. Harrington is a scoring machine and teams like San Antonio, Utah, Phoenix, New Jersey, and Atlanta could use his services off the bench.

Jefferson found out what it feels like to be a five-second guy. That means a player that consistently had to take shots with the shot clock winding down. I thought attitude-wise he handled it well, but will he decide to opt out and leave a boatload of money on the table? I say not!

Felton had a good year under Larry Brown and I look for him to return. The Bobcats keep trying to replace him, but he stays in the lineup. He should do whatever it takes to stay in Charlotte.

Excellent defender with so-so offensive skills. Brewer flourished in the Utah Jazz system, but will struggle on teams where he has to stand and take perimeter shots. He would be a huge pick-up for a team right on the edge of winning a championship. Boston, Lakers, Spurs and Nuggets could use his skills.

He is listed this high because, like always, teams fall in love with players that have not been seen in a while. Plus Childress has some leverage. I hear that he is ready to come back to the NBA, but the price probably still will not be to his liking.

I just don’t know about Thomas. He does want to stay in Charlotte and that is a good thing, but does Charlotte want to pay him great money and not know what to expect from an extremely athletic player with below par offensive skills. Thomas would be a good fit on Phoenix, New Orleans, Boston and Utah because they have guards who can get him the ball in areas where he can do some damage. Unfortunately those teams probably can’t afford his asking price.

No one is talking about Haywood, but I love his length and defensive abilities. If he is not trying to break the bank, he could end up on a team extremely close to making a serious run at a championship. Oops, hold up. He already is a member of one! The chase for LeBron or Bosh will probably cost them Haywood in a sign-and-trade.

Despite Allen’s struggles in the Finals, I think he has a number of years left. I just don’t think it will be in Boston. I am positive Boston will try and get younger and that’s a good idea because they looked old and beat up too many times this year. Allen needs to find a team that spreads the floor and runs consistently. He is getting banged around too much and that takes a toll on his legs. Allen would be a tremendous addition to Phoenix, OKC and Utah.

I have him at 13, but I am not sure he belongs here. Salmons disappoints you when you think about how good he can be, but never shows the consistency expected for the dollars he will demand.

He is one of my favorite players in the league and will be highly sought after right away on July 1. He has a toughness about him that would fit on any team and he will not cost a ton of money.

He could opt out, but I don’t see the Celtics allowing Pierce to even think about leaving. He has been in Boston his whole career and although a few teams will call to take a look and see, they know Pierce is a Boston lifer and rightly so.

The perfect example of just fighting to be productive. Yes, he plays in a shoot ’em up offense that produces a ton of rebounds, but he still is the one getting them and last I counted there are nine other players on the floor as well. What a great pick-up he will be for anyone. If Dallas can’t woo Lebron or Bosh, then Lee could be the answer.

Although restricted, I would not be surprised to see a team do Memphis dirty work if they lose out on one of the Top 6. He is a special scorer and surrounded by talented veterans, Gay could be an All-Star quickly. I can’t imagine Memphis allowing him to escape and so they are not going to be in a hurry until one of the teams with a boatload of money can’t land a Top 6 free agent. Even then, he will probably remain a Grizzly.

I truly love Boozer’s work ethic and approach to the game and I am sure Jerry Sloan despite having a fall back in Mehmet Okur and Paul Millsap is not looking to a season without the consistent Boozer. Boozer can end up in Miami, Jersey, Chicago or go to a contender in Dallas. Wherever he goes, that team will sign a gem. I am almost certain it will not be back in Utah.

Atlanta was my second favorite team and for obvious reasons. One of my best friends in the world is ex Hawks coach Mike Woodson and one of my favorite players is Joe Johnson. I hated when Joe left Phoenix and now Atlanta will suffer the same consequences a few years later. Johnson is gone and it’s just a matter of where he will settle down. I believe Chicago is his preference. The hard part I am having concerning Johnson is why he is in such a hurry to leave a 53-win team with very good talent. The Hawks will become a lottery team if Johnson walks and that will be devastating.

I remember when Shawn Marion was in a hurry to leave Steve Nash. I often wonder… Would he have pushed for that decision knowing what he knows now. I highly doubt it and now I wonder… Will Amare be making the same mistake. Amare is a wondrous talent and most importantly a devastating finisher around the basket. That skill needs a feeder and Amare really needs to weigh that scenario when wanting to play with a great player that shoots first and passes second. The Suns still have a great opportunity to re-sign him because he loves Phoenix. But most importantly, he really bonded with his teammates. Obviously Miami is in the mix along with New Jersey, but our hope is Amare stays in Phoenix.

I am wasting my time even mentioning Dirk because he is not going anywhere. He is opting out in hopes that he can persuade LeBron James into joining him in Dallas. Don’t be surprised if it happens. James is very close to Jason Kidd. A super smart point guard to go with a plethora of shooters and defenders could sway King James.

I like Bosh as a package deal with another free agent, but I don’t think he is a player you focus in on as a premier addition by himself if you are New York. New Jersey would be perfect because of the tremendous skills of Brook Lopez, but it’s obvious Bosh would love somehow to end up in a Lakers uniform and that would take a Lamar Odom or Andrew Bynum combo going to Toronto. I just don’t see that happening. If James goes elsewhere, look for Bosh to sign with New Jersey.

It is not known if he will opt out. But if healthy – and that’s a big if – Yao would be a huge pickup for New York or Chicago. Both teams could go after a Joe Johnson as well and that would be a great combo that develops out of nowhere. That’s all pure hope because I think Yao stays in Houston when it’s all said and done if he does opt out.

I know Wade has a fondness for Chicago, but he realizes intense pressure to live up to that statue out front of the United Center could be an unfair challenge. Wade has a championship in Miami and he obviously knows his legacy has already been established there. So why risk it? I don’t believe he will. Miami is home and the only teams I can see him leaving for will be the New York Knicks or Los Angeles Clippers. Why? Because Wade loves the Hollywood atmosphere and those two cities will provide it.

The (all-around) most talented player in basketball finally gets his chance to be recruited, which is something he missed out on by not going to college. I know plenty of teams are lining up, but the obvious choices like New York, New Jersey, Chicago or Cleveland could be upset if James decides to sign with Dallas, Portland or the Los Angeles Clippers. I would really like for James to finish out what he started in Cleveland, but they lack the shooters to keep the pressure off James come playoff time against the likes of Orlando and Boston and that could become the deciding factor.