Michael Beasley: "Sometimes my mistakes have been magnified"

Michael Beasley: "Sometimes my mistakes have been magnified" 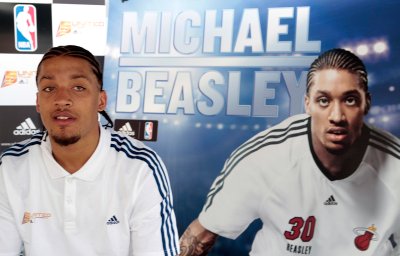 What are your offseason plans?

Michael Beasley: Working out. Get better. I’m going to play the summer league. Pretty much don’t stop. I haven’t had any vacation. I just went straight to working out. I feel I can do a lot to improve my game to help the team and take us further to the playoffs.

Any special routine this summer?

MB: No, I’ll use the regular coaches, assistant coaches.

Did you see draft night?

MB: Not at all. I was flying to Europe. I missed the draft, the U.S. soccer game… I missed everything (laughs).

MB: I don’t follow soccer a lot, but I’m definitely interested about what’s happening in the World Cup.

Right now there’s only two players with guaranteed contracts on the Heat roster: Mario Chalmers and you. Does it feel strange that it’s very possible that you’ll have almost a new entire team next season?

MB: It’s crazy when you think about it. But you won’t see too many seasons like this. Some players might stay at the end, but it’s true that we might have almost a new roster next season. We’ll start over.

How do you feel about Wade’s chances of staying in Miami?

MB: I definitely feel that he’ll stay. He’s accomplished a lot in Miami, he won a championship and a Finals MVP… He already has laid his foundation.

Among the big free agents, who would gell great with you and Dwyane?

MB: Anybody. You know Chris Bosh… Amare Stoudemire would be great. Of course LeBron James would fit in right away. But as of right now we must grow as a team, get better and things will just work out.

After two seasons, do you feel like you have become kind of a lightning rod for criticism during your career?

MB: I do. Honestly, I don’t see why. Everybody makes mistakes and I feel like sometimes mine have been magnified. I feel like I’m expected to act older than what I am. I’m not saying that’s a reason to do some of the things I’ve done. But you know, I’m like everybody else: I make mistakes, learn from them and move on with your life.

And after two seasons, your life has changed. You’re an NBA player. Do you still stick together with your old crew of friends?

MB: Yeah. I don’t have too many friends. Actually I have a crew of two people: me and a buddy from high school.

Ron Artest was often criticized during the season after signing with the Lakers, but after Game 7 of the Finals everybody was talking about how he had redeemed himself. Do you see that as an example or inspiration?

MB: I don’t. You know, everybody has his own past. I’m following my own path, trying to execute my plan as well as possible and grow, not only as a player but as a person. Like I said before, everybody commits mistakes, and that’s how you build your character… What do you do after mistakes.