Parker a believer in LeBron's return

Parker a believer in LeBron's return 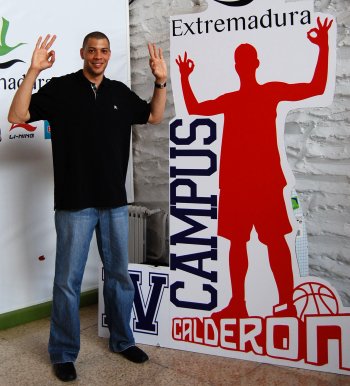 For the second year in a row, veteran swingman Anthony Parker had to take vacations earlier than expected. Following a disappointing final season with the Raptors, Parker signed with the Cavaliers last summer hoping to help LeBron James to his first NBA title. The chances looked good, but it was not to be. Cleveland fell quite short of the goal after a brilliant regular season and Parker found himself with a lot of time in his hands.

Parker used some of the down time last week to travel with his Puerto Rican wife and his two kids to Caceres, Spain to join former teammate Jose Calderon for the fourth edition of his Marca Extremadura camp, the same one Chris Bosh attended last year. With LeBron James potentially becoming a former teammate too this summer, questions about free agency followed Parker there.

You can count Parker among the dwindling number of believers in King James’ return to Cleveland.

“I’ve always thought there’s a better chance of LeBron re-signing than of him leaving,” Parker said. “Cleveland is all for him. It’s where he grew up, he has always played there, he has a great team in place there, he has his house in Akron… But at the end of the day the No. 1 thing for LeBron is winning. He’s going to go wherever he thinks he has the best chance of winning.”

The veteran Parker, who logged major minutes as one of James’ backcourt teammates, is not surprised by the magnitude of the free agency drama.

“We knew two years ago that this was coming and it was going to be huge,” he said. “Lots of great players were going to become free agents at the same time and it all kind of took a life of its own. I expected this. Part of it is sometimes there’s not much to talk about, so you knew there was going to be all kind of rumors.”

The Celtics’ ousting of Cleveland in the second round of the playoffs did nothing to squash the ever-present fear of losing LeBron James among Cav fans – especially with the way it went down.

To this day, Parker is shocked by the turn of events.

“Getting eliminated was not in the plans, but in basketball anything can happen,” Parker said. “The Celtics were a great team and they started playing well at the right time and we couldn’t defeat them. I think it was more their merit than our fault. You saw those guys took the Lakers to seven games, so they were pretty good.

“Anyway, I still think we had the better team. I wish we could have the chance to redo the whole thing again. I believe we’d have a very good chance of winning it all.”

Parker doesn’t put any of the blame for the failure on dismissed head coach Mike Brown, widely criticized for his scarce offensive plays and lack of response to Doc Rivers’ tactics.

“Coach did a good job,” Parker said. “A guy that leads a team to most wins for two regular seasons in a row has to know what he’s doing. But we had certain expectations and we didn’t achieve our goals. And it’s always easier to change the coach than change the whole team. But he’s a great coach. He’s going to be a head coach in the NBA again soon.”

The 35-year-old Parker, whose numbers dropped to 7.3 ppg and 2.9 rpg in 2009-10, is entering the final season of his two-year, $5.5 million contract with the Cavaliers. It’s no given that we’ll see more of the classy veteran on the court once the deal is over.

“I feel really good and think I can continue to play. But there’s going to be more factors involved. I have a family and you have to factor that in. It has to be a good situation, a good fit for me and I have to enjoy it. I’m not going to continue to play just because I can, but because I’m enjoying it. Also you have the possibility of a lockout… There’s a lot of things to factor in.”

If he stays around, it’s probably going to be in the NBA and not overseas.

Parker, a high-flying star in Europe before becoming a below-the-rim role player back in the U.S., was once named MVP of the Euroleague Final Four, twice chosen MVP of the competition and three times continental champion with Israeli powerhouse Maccabi Tel Aviv. Quite a resume for a man that had to take the CBA route in 2000 after running out of opportunities in the NBA, where he was a bit player for Philadelphia and Orlando early in his pro career.

The European memories are great, but he’s not thrilled about the possibility of returning to his old stomping grounds.

“I never say never to anything. But again, I have a family. I have two boys that are growing up and I’d rather stay in the U.S. My preference would be to stay in the country rather than going back to Europe.”