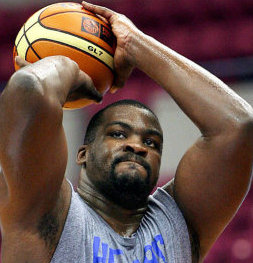 Sofoklis Schortsanitis made his NBA debut at the Vegas Summer League Monday night, a little over seven years after getting selected by the Los Angeles Clippers with the 34th overall pick as part of a draft class that featured the likes of LeBron James, Dwyane Wade and Chris Bosh.

It’s been seven intense years for the Greek giant of Cameroonian descent. He competed at the highest European level with Olympiakos, played at the Olympic Games, defeated Team USA in a World Championship semifinal clearly dominating the American centers and battled weight issues that reached OliverMillesque proportions while clashing with a coaching legend.

After all those high and lows, Schorsanitis now feels it’s time to prove he belongs in the NBA.

“I was drafted seven years ago, but then I wasn’t ready yet so I reached an agreement to play for a few more years in Greece,” Schorsanitis said. “I developed. I’m more mature as a player and as a person and I’m ready to try here and test my skills.”

There are questions about whether he will be able to make it in the league. Despite his obvious basketball talents, Schorsanitis has seen limited playing time throughout his career because of serious conditioning problems.

A good outing in the Vegas Summer League (he went scoreless in his first game) could pave the way for a nice offer from the Clippers. There’s no guarantee that will happen, though.

“What the Clippers told him is, ‘We know you, we’ve followed you for a lot of years,'” agent Panos Kapazoglou told HoopsHype. “There’s no promise, but they’ve told him, ‘We will offer you a contract once we know exactly how much money we have left.'”

As is often the case with many top European players, Schortsanitis is in a little bit of a rush to resolve his contract situation since Euro powers don’t like to wait too long to complete their rosters.

“We have offers from Europe and pressure is increasing,” Kapazoglou said. “The discussion with the Clippers was that this week they will come up with an offer and then we’ll see where we are standing.”

An NBA contract would be an unexpected development for a player whose career looked almost over not so long ago; yet another Baby Shaq who failed to deliver. From time to time, pictures of an unbelievably overweight Schortsanitis surfaced in the Internet.

The 6-foot-9 center hit rock bottom during the 2007-08 season, when he ballooned up to nearly 400 pounds with Pini Gershon at the helm of Olympiakos. Schortsanitis butted heads with the legendary Israeli coach, most known in the U.S. as the guy who refused to leave the court after being ejected during a game against the Knicks at the Madison Square Garden last fall.

“Every problem Sofo showed was with him as a coach,” said Greek basketball analyst Nikos Kousoulis. “Before him and after him, he was OK. It was obvious they couldn’t stand the sight of each other, but Sofo let go way too much. Probably the fact that he was so young didn’t help him to cope with it maturely and patiently. If you start eating, it’s too hard to stop – especially if you are down psychologically and unhappy. I do think that Gershon had a very big portion of the blame in the case.”

“Growing up, he was so highly touted as a future star that it was hard for him to control that situation mentally,” said Greek head coach Fotis Katsikaris. “He never had two seasons in a row where he was consistent.

“There’s no player in Europe with his physique. But there was always something with him. His weight, his mentality… But something clicked one day and it seems like he has changed as far as putting more effort into basketball, working hard and forgetting about the past.”

“He is a very good kid, but since he had learned from everybody that he was special, he expected special treatment,” Kousoulis said. “That all seems over now. He realized that in order to be a professional he has to work hard and keep his head down. In 2007-08 he almost quit basketball. He was in a terrible condition. So you can realize how hard he had to work in order two years later to be signing for the Clippers.”

Again, that’s no given. Schortsanitis has to prove his worth in Vegas. Besides, his agent doesn’t think Big Sofo would play for the minimum, which might be an issue with the penny-pinching Clippers.

The memories of that fantastic semifinal game against a star-studded American team at the 2006 World Championships might persuade the Clippers to take a gamble on the talented and beastly big man, though.

“That was the highlight of my career… till the next one,” Schortsanitis said. “It was OK, it was a great game. But I think I’ll have a lot more opportunities and a lot more great games on my way.”