Goran Dragic: "Nash saw I could play against anybody"

Goran Dragic: "Nash saw I could play against anybody" 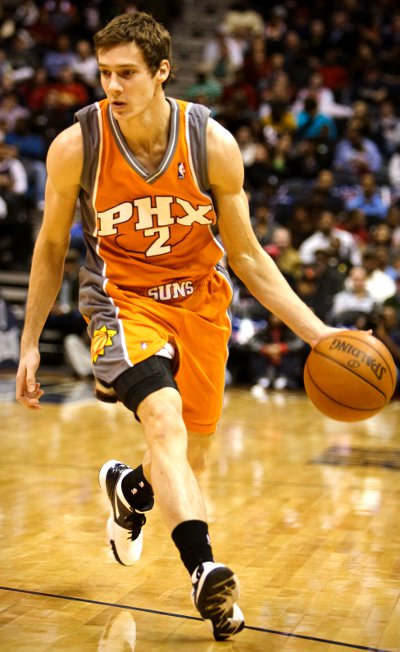 You played at the Summer League last year. How did it help you to improve your game?

Goran Dragic: It was a big experience. It was the first time in my NBA career that I had the chance to lead a team for the first time, being the main point guard. I learned a lot and I think these summer leagues are a good opportunity for us young to develop our game.

I know there’s not-so-pretty basketball. It’s more individual basketball because you have to show your skills to the managers. But that’s how it is.

What’s your plan for the offseason?

GD: I came to the U.S. to practice two or three weeks, then go back to Slovenia to play for National Team at the World Championship in Turkey. After that I’ll immediately go back to Phoenix.

GD: I have to be ready for the National Team, that’s why I came here to the States to work with my personal coach Nenad Trajkovic. He’s Serbian and signed with the Suns.

GD: Last year he was in Phoenix like for two weeks and they saw what kind of improvement I made. We share the same agent so it was an easy for them to sign him and I’m very happy about it.

What are the chances of Slovenia at the Worlds?

GD: We always have a great team but in every tournament something comes up, especially related with injuries. Last year me and Matjaz Smodis were injured. Every year is something different. Every year some guy doesn’t go with the team. This year is Erazem Lorbek… But still, we have to do our job.

We have still a great young team. It’s a tough group for us: USA, Brazil, Croatia… We have our chances, we just have to play our game. We need chemistry. If you have chemistry, by not playing selfish you can get a good result. When we played the European Championship in Madrid we had an average team. No Beno Udrih, no Bostjan Nachbar… And we played great. This year we have Beno, Nachbar, and I will try to help there too.

It has been a breakout season for you in Phoenix. Did you really expect to play so good?

GD: I knew I had the skills to play like this. Alvin Gentry believed in me. I practiced hard and waited because I knew my moment would come. Then at pratice, I played against Steve Nash and he saw I could play against anybody. Steve is the best point guard in the league. Sometimes he came to me and said “Hey kid, just play your game. Don’t be upset.”

So then, Alvin just gave me an opportunity, I relaxed  and just started to play my basketball. And then when you have a good game you realize you can play at this level. That opens the door. Another big factor was that people from the club believed in me: Steve Kerr, David Griffin, Alvin… That means something.

GD: I was hoping that he would stay, but that’s his decision. But we’ll be OK. Now we have new good players. Hedo Turkoglu is a great guy and a great player and he can help us a lot. The club is getting players with great characters and our chemistry is great.

What’s your take about the new Big Three down in Miami?

GD: I don’t know… They want to win rings.

But chasing a ring when you’re still young, leaving a lot of money on the table…

GD: Definitely, it looks like fans and around the league, people are not very happy about the decision. It’s gonna be much easier to win the ring with those three guys, but maybe they’re gonna need three more balls. I don’t know whose gonna take the big shots at the end of the games. But we have to wait and see. You never know, maybe they’ll get along perfectly.

You see, I didn’t ask you about Vujacic…