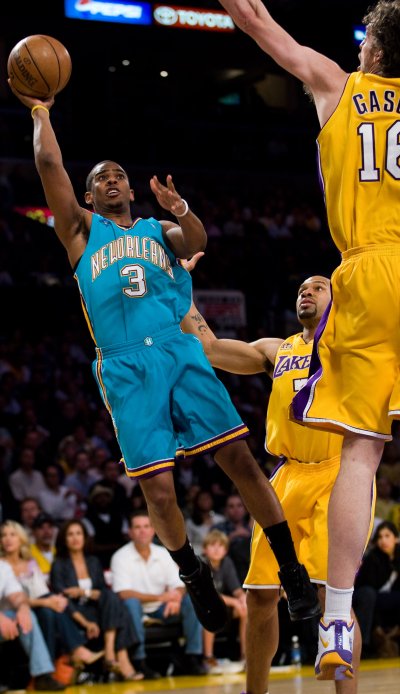 Gee, who could have imagined Chris Paul’s world going so wrong?

I could, for one. I wrote those words for HoopsHype last Nov. 4, a week into the season, which was long enough to figure out that the New Orleans Hornets were in a death spiral, that Paul knew it and, unless things turned around, he was outa there.

After hinting about it all last season–including his toast at Carmelo Anthony’s recent wedding in which he reportedy suggested he, Melo and Amare Stoudemire might form their own Big Three with the Knicks–Paul made it official last week, telling ESPN’s Chris Broussard, “I’m open to being traded.”

Everyone is now uttering expressions of disbelief, like Claude Rains’ immortal line as the police chief in “Casablanca” that he’s “shocked—shocked!” to discover gambling going on at Humphrey Bogart’s club, as one of Bogey’s guys slips him his winnings.

Here are a few principles to remember, should anything like this occur again, since it always has and always will.

1. From the moment a young star arrives, all the other teams line up hoping to steal him.

2. No star will stick around without a chance of winning.

3. No matter who it is, from Bill Russell and Wilt Chamberlain to Michael Jordan, Magic Johnson and Larry Bird to Paul and LeBron James, he’ll need a good team around him.

A year ago, the always-dependable Conventional Wisdom insisted LeBron James would stay, since few superstars left as free agents, with the notable exception of Shaquille O’Neal, long, long ago, or, at least, in 1996.

All that overlooked was the galaxy of stars whose trade demands had reconfigured the balance of power from time immemorial (Wilt, Kareem Abdul-Jabbar, Moses Malone, Pau Gasol, Kevin Garnett et al).

Bottom line: Big guys get what they want. If their teams don’t hold up their end–and sometimes even if they do—what the stars want is out.

And now, Chris Paul, to borrow (yet) another movie metaphor, Little Big Man.

Of course, CP3 has two more season before his 2012 opt-out, so your normal owner would tell him he doesn’t care what he’s open to.

The Hornet owner, however, is George Shinn, still clueless, penniless and desperate.

Shinn was supposed to be gone by now, with minority owner Gary Chouest, who’s local and has money, buying out Shinn, who lives out of his carpetbag and ran up $30-35 million in debt.

However, since the sale was announced, there has been a little two-month snag about who pays off that $30-35 million.

Negotiations are ongoing but spokesmen insist Shinn and Chouest are making decisions together.

Of course, the spokespeople keep changing—lately it’s President Hugh Weber, who ran the business side–and must mean Shinn and Chouest both want to run the franchise into the ground.

In June, the Hornets sent out a trial balloons, shopping Paul discreetly—or trying to.

AOL Fanhouse’s Sam Amick reported it. Bower tacityly confirmed it in a non-denial denial ("We have the duty to listen and have dialog with teams about all of our players. I've also always said we have a very high value and opinion of what Chris provides for us.")

With Hornet fans up in arm, Shinn then announced Paul would be back.

The GM who had taken over on the sideline when Scott was fired, lost Paul in January and went a surprising 34-39 with rookies Darren Collison and Marcus Thornton, creating a reason to hope —briefly– was suddenly fired.

The team said it was a mutual decision. As Pres. Weber put it, “We feel it is in the best interest for us and Jeff to part ways at this time.”

Actually, insiders say Bower told Shinn if he wouldn’t do anything he recommended, he could fire him, and Shinn did.

Paul would be a moron, or bent on career suicide, or both, if he didn’t want out of there, but he’s neither. After five seasons as the perfect soldier, he’s entitled to look out for himself.

Now it’s just a matter of when he goes. I’d guess next summer after everyone has low-balled the Hornets for a year, unless Shinn, being Shinn, takes one of the low-ball bids.

There’s no reason any of this, aside from Shinn becoming an NBA owner, should be controversial, but these days everything is.

Wrote Wojnarowski: “What Paul ought to do is run away from James, Wesley, Carter and not stop moving until he’s returned to New Orleans and reaffirmed the obligations he’s made there. No, this isn’t a championship team, but a franchise player reveals himself in good times and bad.”

James is publicly cheering on James via Twitter, urging him to “do what’s best for you and your family.”

Carter is eager to get CP3 to join their LRMR marketing company.

Wesley, the hanger-on recently mistaken for a power broker, is out trying to put together deals, like every other legitimate agent, street agent, talk show host and sports writer I know.

James and his bumbling “advisers” turned his recruiting process into a farce, eclipsing the fact that he had spent seven seasons in Cleveland and tried mightily to stay, asking big guy after big guy (Chris Bosh, Amare Stoudemire) to come.

The problem was, no one loved Cleveland the way LeBron did. Bosh turned down a sign-and-trade the Raptors would have done, for J.J. Hickson and Anderson Varejao, which would have meant an extra $20 million, to go to Miami with Dwyane Wade.

Only when it came down to playing with the Cavalier smurfs or having a chance to contend did James leave.

LeBron then served himself up to his critics like a roast pig with an apple in its mouth, selling his decision to go to Miami (wrong) to ESPN (disastrous).

And the seasons, they go round and round and the painted horses go up and down. (Thanks, Joni Mitchell.)

Aside from all the name-calling, it’s a summer like all summers, just with bigger names.