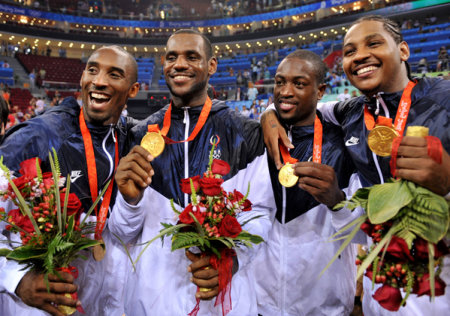 There is a pretty big basketball tournament coming up next month in Turkey. It’s called the World Championships which, in just about every country not named the USA, is considered to be the creme de la creme of international competition.

The winner of the tournament earns an automatic berth in the 2012 Olympics in London. Twenty-four teams are competing and USA Basketball is once again assembling a talented team to compete. But is it a team that can win?

Taking a glance at the roster offers a revealing look into the relative importance of the Worlds in the USA. Not a single player from the gold-medal winning 2008 team from Beijing is competing in Turkey, even though the players were all supposed to sign on for such commitments.

There is no LeBron, Kobe, D-Wade or Melo. There isn’t even a CP3 or a Deron Williams. There is no Dwight Howard or Chris Bosh. All that remains from Beijing (and, two years before, the Worlds in Japan) is the coaching staff led by Duke’s Mike Krzyzewski and the overseer himself, Jerry Colangelo.

The United States team just completed a training camp in Las Vegas and will hold another, week-long camp in New York, before heading across the pond. Colangelo said the Yanks will likely take 15 players to Europe, although only 12 can be on the final, official roster.

The aforementioned NBA stars are not the only A-listers skipping the tournament. Pau Gasol will not be competing for the defending champs from Spain. Manu Ginobili will not be playing for Argentina, currently the No. 1 team on the planet according to FIBA’s world rankings. (The USA is No. 2 and Spain is No. 3.) Dirk Nowitzki is declining to play for Germany, although he said would play next summer in hopes of helping his country qualify for London.

This is the fifth World Championships to be held in which NBA players could compete. In the United States, there seems to be an Olympics uber alles philosophy, where we try to deliver our best for that quadrennial competition even though most see the Worlds as a more competitive and legitimate competition.

In only two of the previous four world championships has the United States sent its A Team, or even something approximating an A-Team. Maybe that’s why the country is still looking for its first gold in 16 years.

In 1994, in Canada, the U.S. was two years removed from the Michael/Magic/Larry Dream Team and none of the 1992ers participated. (Once again, showing our Olympic bias, five Dream Teamers played on the 1996 Olympic Team: Charles Barkley, Scottie Pippen, Karl Malone, John Stockton and David Robinson.) But the U.S. was still miles ahead of the internationals at that point and easily won the gold. The one notable event in that tournament was that coach Don Nelson had to call the first “stop-the-bleeding” timeout since NBA players were allowed to play. Chuck Daly never had to do that in 1992.

The other time the U.S. sent a stacked contingent was in 2006. But even with a lineup headed by LeBron, D-Wade, Melo, CP3 and Howard, the U.S. team was upset in the semifinals by Greece and had to settle for the bronze medal. In 1998, with the NBA locking out its players, the country sent an eclectic group to Greece composed of CBA players, internationals and a couple just-graduated collegians, the most notable being Brad Miller. It finished third. And who can forget the disastrous 2002 tournament in Indianapolis, when Team USA lost for the first time with NBA players (to Argentina) and then proceeded to lose twice more to finish a humbling sixth?

So can this year’s team, led by Derrick Rose and Kevin Durant, come back from Turkey with the gold? It could be a struggle. The roster appears to be short on ‘bigs,’ with Tyson Chandler appearing to be the No. 1 center candidate. They are deep at point guard with Rajon Rondo, Russell Westbrook and Rose. Durant is Durant and will get scoring help from Rose, Rudy Gay and old friend Chauncey Billups, the eminence grise of the team.

But can it make a serious run at the gold against the solid international teams who have had years of experience playing together and who are more comfortable with the international game. Spain may be missing Gasol, but they didn’t have him for the 2006 championship game in Japan and won. Most of the other big-timers from Spain are on the roster, including Ricky Rubio, Juan Carlos Navarro and Marc Gasol. Jorge Garbajosa and Rudy Fernandez also plan to play for Spain as does the Raptors’ Jose Calderon. Argentina won’t have Ginobili, but its roster includes the estimable Luis Scola, Fabricio Oberto, Andres Nocioni and Carlos Delfino.

Serbia is regrouping after some down years. Lithuania is always competitive and France’s roster has six NBA players, though it’s unknown how many will actually play. (Joakim Noah is on the French roster. Tony Parker is not competing.)

No one needs to remind Colangelo or Coach K that the days where the Americans could simply roll out a group of NBA players and expect to win are long gone. That ended in 2002. And until the U.S. takes the Worlds as seriously as everyone else, or as seriously as it takes the Olympics, it will have trouble in the tournament.

One reason the U.S. hasn’t won gold at the Worlds since 1994 is that the competition has dramatically improved. Another one is that it hasn’t always sent its best and, nowadays, you need your best because the world has caught up.