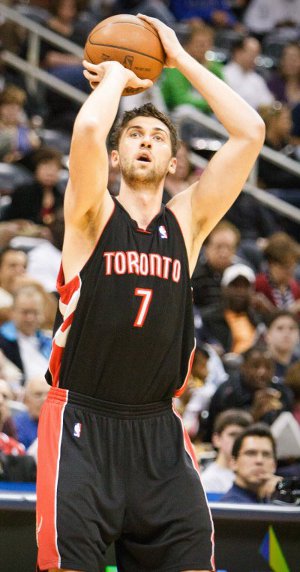 Andrea Bargnani: For sure he leaves a big hole because he’s a very good player. We’re going to miss him because he’s an All-Star. Playing with him makes it easier for everybody, but we gotta play and it’s an opportunity for me and other players to step up and to do something more.

Do you feel the Raptors are your team now?

AB: They’ve always been my team. I was in a nice spot last year too. I was the second option last year. We have to finish the team because the market is not closed yet… And I just hope we make better. We didn’t make the playoffs, so it’s not like we come from a championship. We can only get better.

How do you think the team has done during this offseason?

AB: I think we signed very talented players: Kleiza, Andersen, the two young guys that we drafted… Maybe they are not ready today to go on the court and do something, but they have a great potential to develop and grow. DeMar (DeRozan) got much better, Sonny Weems too in the summer league… We took Barbosa, who likes to play an up-tempo game… We’re a pretty young team, athletic, we can run a lot. Should be a fun basketball to play.

Which position would you like to play this year?

AB: My natural position of course is power forward. But the last four years, I played at the five and I did good. I got better every year. It doesn’t really make a difference, but if you ask me what position I prefer to play, I have to say power forward.

In which areas do you think you will have to step up the most this season?

AB: I gotta continue to get better on the rebounding and the low post.

Is the All-Star Game a goal for you this season? And do you think that would be a realistical goal?

AB: I think the All-Star Game is a goal and a dream for all the players in the world. You practice, you try to get better every year… You can’t do nothing more than that.

What was your reaction when you learned Bosh was going to Miami?

Some people believe he gave up on the team late last season. What do you think about that?

AB: Every time he was wearing the jersey on the court, he always played hard. His numbers prove that. He’s a good player. As for personal stuff, I don’t know, I can’t know and personally I don’t want to know. Everybody can think whatever.

How do you feel about your NBA career so far?

AB: I got better every year. You cannot ask more than that. But you always want more, so I’m not satisfied. I mean, I’m satisfied with my career, but I don’t feel like I’ve arrived. I feel like I have to keep working and do much more than what I’ve done.

Do you feel the pressure that comes with being picked No. 1 in the draft?

AB: Not really. I had more pressure when I was in Europe and I didn’t know if I was going to the NBA or I was staying in Europe. One year before the draft, I didn’t even know what the draft was. I think the draft is more pressure for an American player. For me, for European players, it’s just a way of getting to the NBA. It doesn’t mean much being No. 1 or No. 2. I was very happy with being No. 1 because it was an historical thing for an European player. But I was even more happy because I got the chance to go to a city like Toronto.

What would you say to those critics you have that question your toughness or your passion for the game?

AB: Anything a player makes, he’s going to have critics about it. You have to start worrying when nobody criticizes you. With a good player, people will criticize and challenge you. And that’s the best thing because that gives you extra motivation.

Other than the extra motivation, does this affect you in any way?

AB: No, because if somebody tells me I don’t have passion that doesn’t make anything to me because that doesn’t have any sense. Without passion, you don’t arrive in the NBA. The NBA is not a joke. You have to work all your life to get in the NBA. So the stupid criticism without any sense doesn’t make anything to me. But there is some criticism that is real. I mean, if somebody tells me I have to get better on something, maybe I realize that it’s true so I try to get better. So some stuff is good to know.

There was talk last year about a division between American and foreign players in the locker room. Is there any truth to that?

AB: There wasn’t any division, no. We were cool. Of course with European guys you have more things to talk about, right? It’s common sense. But we were cool with everybody and friends with everybody. If I speak with Jose (Calderon), I got more things to speak about because we come from almost the same place and we can talk about the cities we’ve been in Spain or Italy.

What has been wrong with the Italian National Team the past few years? The team has been very successful in the past, but they have been struggling lately.

AB: Playing in Europe is really tough. The other teams are always very good and have a lot of players with a lot of experience in Euroleague and big teams. In Italy, it’s different. The Italian basketball, the championship… It’s not big like in Spain, for example. We are pretty young. We need to grow up and learn how to play together. Europe is not easy.