Hope is back in Sacto

Hope is back in Sacto 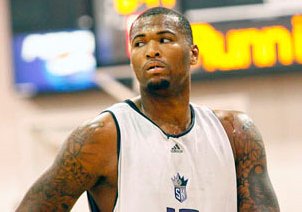 It’s been a while since Sacramento was fighting for the West crown against the Lakers. The once mighty Kings have provided few highlights for the past four seasons with a 34.4 winning percentage and not a single playoff appearance.

Last year was once again terrible results-wise, but the perception about the future of the team among King fans changed dramatically with the coming of Tyreke Evans, who went on to become the first Rookie of the Year in franchise history. Optimism is back in Sacramento. Evans is one of the believers.

“I like our team a lot. We’re young, we have some good talent and we’re just gonna have to get better and better and keep working hard”, Evans told HoopsHype at the Summer League in Las Vegas.

The talented point guard was there to support his teammates and try to get a ticket to Turkey – which didn’t happen mainly because of a sprained left ankle that kept him from practicing with Team USA. He was, like everybody else, eager to get a chance to see his new teammate DeMarcus Cousins.

“He’s learning the job,” Evans said. “He’s had his first NBA experience at the summer league. It’s gonna take some time for him but he’s gonna help us a lot.”

Cousins committed too many fouls (4.8) and his shooting so-so (33% FG), but still looked very promising with a inside-outside game. The No. 5 pick in the last draft proved he’s not a head case and looked like a building block for the Kings in years to come.

The Maloof brothers, Gavin and Joe, were all smiles at the stands.

“I was really really excited about what DeMarcus has done,” Gavin said. “A lot of double-doubles. You know it’s a learning curve. He’s got a lot to learn but he’s got a lot of talent. We got a race to go but, when you got a guy inside with so much talent at 19 years old… You just can’t teach what he can do. And then we have the Rookie of the Year in Tyreke.” 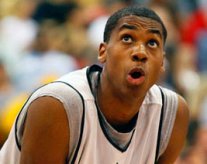 Cousins will not be alone in the paint. If focused, former Sixers center Samuel Dalembert can be a great defensive presence. Seven-footer draftee Hassan Whiteside was a shot-blocking machine at Vegas.

“We are a lot longer that we’ve ever been,” Gavin Maloof said. “We have five players over 6-11. We’re a very tall team right now and that’s very important to compete in this league.”

It might sound crazy, but with a lot of marquee free agents moving East, there may be more room for surprises this year in the West. So a playoff spot for the Kings is not that far away anymore.

“Definitely, that’s what our goal is,” Evans said. “I’ve proved that I’m not worrying about scoring no more. Just trying to get better and hopefully make the playoffs.”

So with Evans and Cousins leading the group, it’s quite sure the whispers about moving the team out of Sacramento will fade away, although Gavin Maloof thinks Las Vegas desperately needs an NBA franchise.

“I hope so someday. We need a team in Las Vegas. There’s everything to do here but there aren’t any sports, so I hope someday that someone brings a basketball team here… But not us! Not us! (laughs)”.