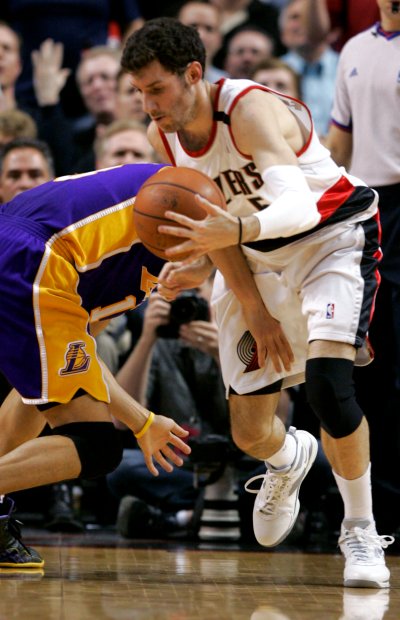 The honeymoon has come crashing down.

Rudy Fernandez, the talented Spanish guard who mesmerized the Blazer faithful, is headed for a divorce with the Portland franchise and it may not be pretty if you listen to his agent.

“Portland and I have had numerous discussions, almost daily, on the situation,” Andy Miller told HoopsHype.com. “I think this situation is headed for a collision course because Rudy’s perspective on where he wants to be and what he wants to do and how he wants to accomplish it is on the opposite of the spectrum from where Portland sees the situation.

“I don’t think (the relationship) is reparable.”

Like Andrei Kirilenko or Manu Ginobili did before, Fernandez decided stay in Europe and hone his skills after being drafted. It looked like a great decision back then. Fernandez was named MVP of the Spanish Cup in his final European season and landed in the U.S. with great pedigree and a fan base already in place. More than 100 people were waiting for him at the airport the day he got to Portland. The expectations were enormous.

After a pretty impressive rookie season where he beat the record for most three-pointers by a first-year player, things started to go awry during his second NBA season. His role on the team didn’t grow early in his sophomore year and an injury in December that sidelined for more than a month didn’t help things later on. By the end of the year, Fernandez’s numbers were down all over the board.

While playing time obviously was an issue, Miller claims Fernandez’s disappointment comes mostly because the Blazers sold him a vision that never materialized.

“The least of Rudy’s concerns is the minutes,” Miller said. “That has been portrayed as the main issue because it’s the easiest way to evaluate statistically. When Rudy came to the NBA, he was at that point certainly the No. 1 player in Spain and one of the top players in Europe. Him coming to the NBA was solely about one goal and that goal was to achieve a lifelong dream of challenging his basketball skills at the highest level, see how good an NBA player he could be. That opportunity and that platform were communicated and portrayed to him in a different light than what the reality has become.

“He’s sacrificed economically and personally to come to the United States… I understand his frustration.”

Miller says Fernandez is so upset about the way things have gone for him in Portland that he may be done with the NBA.

“The impression I’m getting more and more is that he’s lost interest in playing in the NBA, quite frankly,” Miller said. “It’s my impression that Rudy would prefer to be in Europe rather than the NBA at this point.”

FC Barcelona and Panathinaikos are showing the most interest in the Spanish swingman, according to a source.

His former teammate and closest friend in Portland, Sergio Rodriguez, who also expressed displeasure with his role under Nate McMillan, believes pastures may not be greener for him elsewhere, though.

“I think Rudy is a player that can fit in with many teams, including Portland,” Rodriguez said. “Brandon Roy is there, that’s true. And the way Roy plays maybe is not the best for Rudy, but I think he could still play there. You have to be able to handle it. He has to change his mentality as far as acknowledging Portland is the team that drafted him and that’s four years he has to do there before he can make a decision (on his future).”

As of now, it looks unlikely that Fernandez might be willing to wait that much.

When asked if he would go as far as to advice Fernandez not to show up for training camp, Miller answered: “Possibly.”

“This is not going to be a fairy tale ending.”