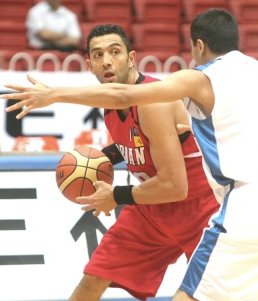 I’m checking in with you guys again. Just arrived to Croatia for a friendly tournament that will start Friday. We will be playing against the host country, Russia and New Zealand. I’m looking forward to playing this tournament. It’s going to be a test for us to see where we stand and what we need to work on before our first game at the 2010 World Championship at the end of this month. But we just lost three players due to injuries and will not play in this tournament! It’s going to be tough on the team because all these players play the 4-5 positions.

After my blog a week ago I saw some comments about why we haven’t played any powerhouse countries to prepare us for the World Championship. If it was up to us (the players) we would play against the best teams like USA, Spain and more. But it’s not up to us. It’s the Federation’s job to get us games like those. Also the powerhouse teams don’t always want to play against us smaller countries. So it’s not that easy and we have to take what we can.

Playing in Jordan was a good experience. But the level has dropped ever since the league allowed to have just two imports per team. Now we only get good games when we play outside of the country. The best tournaments are the Dubai International tournament, the Arab championship tournament and the Asia championship. You get good teams in those tournaments. The level is high and every team has three imports, so it’s fun.

But to be honest, I still don’t understand why the Asia zone has not learned from Europe and started an Asian League like the Euroleague. It doesn’t make sense to me. It would help basketball in Asia so much. Asian players will be able to play all over the continent just like European players, and that would raise the level of basketball on this side of the world even more.

I think that’s why Asia doesn’t get as much attention as Europe. Hope one day they can put their heads together and start an Asian league. It’s long overdue.

Anyway I will check in again with you guys after this tournament and let you know how we did and how we are looking going into the World Championship. God bless.