Kevin Love: "I'd love to sign an extension and get that out of the way"

Kevin Love: "I'd love to sign an extension and get that out of the way" 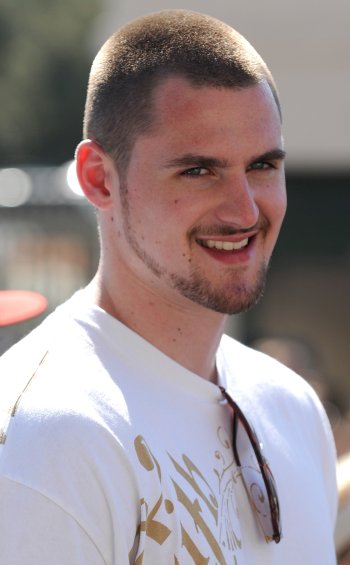 Do you focus on what the other teams at the World Championship do, which players they have?

Kevin Love: Actually, first and foremost we never overlook a team. Many players are either currently playing in the league or played in the league before. We know that every team has played together for a long time and they are gonna be very tough to play regardless of who it is.

Do you watch tape of the other teams?

KL: Yeah. We watch a lot. A team like Spain, after the Olympics, everybody loves to watch Spain and we know they are very talented.

Is Spain the main opponent?

KL: Definitely they are right up there, but there are a lot of other good teams – Brazil, Argentina, Greece… I could go on and on. Spain has current NBA players and former NBA players and even without Pau Gasol, they will be very tough to deal with.

So apart from the U.S. and Spain, is any team capable of winning the gold medal?

KL: Absolutely. Any team can win on any given day. It’s like the NCAA tournament: any team can win. It’s not a best-of-seven series. One game, one chance, if you lose you’re done.

How would you rate the job GM David Kahn has done so far with the Timberwolves?

KL: I was hoping Ricky Rubio comes over and play… We definitely upgraded our team this summer. We re-signed Darko Milicic, we got Michael Beasley, we got a bunch of other players like Luke Ridnour, Sebastian Telfair… So we’re definitely looking better. Last year was a very tough one. As far as the job that he did, I’m looking forward to seeing what happens the next couple of years with our team.

Did he surprise you with the moves he made? He seems to sign a lot of point guards, forwards…

KL: It’s too early to say “good” or “bad.” I’m very optimistic in Tony Ronzone. Also Kurt Rambis. We’re very excited with the coacing staff. We are so young and we have so much cap space that we think it’s gonna work for us and we’re happy about it.

They have cap space, but it doesn’t look like Minnesota is one team that’s really going to get the big free agents. At least it didn’t happen this summer…

KL: You look at teams with big markets – Chicago, both LA teams, Atlanta, Miami, Orlando, New York, even a team like Portland with great fans and a great place to live… You look at those teams and you say “Oh, they can definitely get players”… But we’re just hoping we have a good year so we can sign a big-time free agent. But if not, we can get a second-tier guy. We’re gonna have good draft picks and hopefully keep growing as a team, because if not we’ll obviously have to make changes.

You talked the other day about how you felt a little bit more appreciated here with the U.S. team than with the Wolves. Why is that?

KL: Just clarifying… I felt like it was a family atmosphere. I’ve known all these guys here for a very long time. USA Basketball is more about winning games and playing for the name across your chest. I mentioned that with the Timberwolves we just need to keep growing as a team. With four, five returning guys… Last year we had kind of the same thing, so we’ll have to really blend and kick off the chemistry.

Do you see yourself playing in Minny all your career if it’s up to you?

KL: We have to wait and see what happens with the next CBA, but I’d be happy to stay. If they wanna move me, it’s up to them. I’m just going to go out there and play my butt off and try to make any team that I’m on better. I look at it like, you know very few players play their whole career with the team that drafted them.

Would you like to become a free agent or would you rather sign an extension and get that out of the way?

KL: I’d love to sign an extension and kind of get that out of the way. I’m very comfortable in Minnesota. I like the style that Kurt Rambis has and the coaching staff as well. I want to keep getting better and better and signing an extension would be a little more sweet rather than bittersweet.

Is Kurt Rambis the coach you expected him to be?

KL: He’s a great teacher. He had never really been a head coach before besides a short stint at the Lakers. Him coming in and doing the job he did, he was in a tough position. The chemistry was a little off, we only had a few returning players, our talent level was a little bit lower than it is now… I’m looking forward to learning a lot more from him.

Do the players notice when a rookie head coach comes to a team? Can you tell he’s a rookie?

KL: A little bit different than a rookie player. He’s been around winning so long with the Lakers as a player and as a coach that he really picked things rather quickly when he came last year.

KL: Yeah! I’m looking forward to returning. I got to figure out when I’m going to launch that again. So we’ll see.

What happened last year? Did the team tell you anything like “Please stop doing this” because of the Kevin McHale issue?

KL: They did a little bit. I just got tired of them telling me “Hey, don’t tweet about this, don’t tweet about that.” They were calling me, voice mails… It was kind of like breaking the barrier a little bit in Twitter with what I did, but at the same time they got on me about it a little bit… I’ll be back and hopefully it won’t be the same thing. They’ll kind of let me do my thing because the rules are set in the NBA with Twitter, with Facebook, with all that stuff. I’ll be back soon.