If knowledge is power, U.S. in trouble

If knowledge is power, U.S. in trouble

Why do players and fans 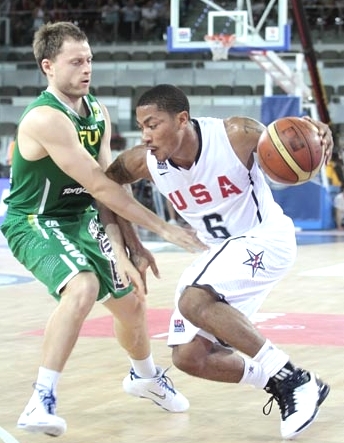 care more about the Olympic basketball tournament than the World Championship?

Derrick Rose: People in the U.S. think that the Olympics are the biggest thing, but it’s different over here with the World Cup… I guess all overseas players get more attention. I guess it’s more exciting, you get more teams… I guess it’s harder to get a spot to play in the Olympics.

Stephen Curry: It’s just that there’s bigger patriotism at the Olympics, kind of pride about our nation when you have a lot of athletes, lots of teams going… Basketball is just one of them. You have the open ceremony, it’s pretty hyped up and people pay attention to it. But the World Championships is a little different because it’s only basketball, it’s usually overseas somewhere… It’s one of those things that we haven’t won in a while so kind of people have lost some of the attention. So hopefully we can bring the gold back to our country.

Lamar Odom: I guess the history and tradition. A lot of Americans are unaware of the World  Championships. But after the coverage of this year’s World Championships, that most likely will change.

Jim Boeheim: It’s not because of basketball, it’s because of the mental philosophy of all americans. It’s Olympics. The rest of the world thinks about the soccer World Cup and the basketball World Championship. They tie them together. But when you’re growing up in the United States, the biggest thing is the Olympics. And it’s not just basketball, it’s any sport.

Can you name players at the World Championship among those that are not in the NBA?

Rose: Navarro. The one who used to play for the Raptors… Oh, Rubio! He’s playing here… I don’t know anybody else.

Odom: A lot of people! Garbajosa used to play…

Boeheim: Navarro, Rubio… A lot of the Spanish players. I know the whole team of Argentina except for a couple of guys… Greece doesn’t have any NBA player… I know their names a little bit. Greece is probably one of the best teams in the world and they don’t have any NBA player. They are the only team that beat us in the last three years. The kid Papaloukas was really good. He’s a great player. He was the one who beat us, they wouldn’t have beat us without him.

Can you name any coach?

Boeheim: I’m not that familiar with coaches. I’m not as far as their names. I know Spain has a new coach, the ones who are coaching China and Greece…

Boeheim: Spain won the last one, and the one before that I think it was Argentina.

Do you have any idea if Darko Milicic is playing?

Boeheim: Darko? No, he’s not playing with Serbia.

Jorge Sierra contributed to this story / Picture by Emilio Cobos