Half-court game dangerous for the U.S.

Half-court game dangerous for the U.S. 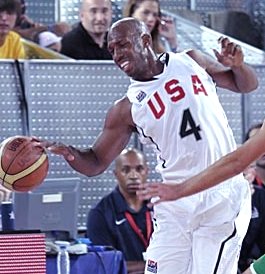 Hey, a win is a win – especially in a tournament like the World Championship. So escape and be happy that you did escape. For the first time, though, Team USA saw an opponent setting the tone. That’s something to be concerned about.

Brazil forced the USA into a stagnant game. Like Pete Carril did, they used the offense to keep you on defense – which is something totally unfamiliar in the NBA world – thus using the clock as an ally. At the end of the day, you still have to hit shots. And Brazil didn’t. Still, it was a strange game.

Why strange? Outside of Brazil executing a sound-continuity offense, what else was there? The U.S had no rhythm to its game at either end. What was the offensive scheme? Post-up? No. Pick-and-roll? Not much. Weave? Set plays? I don’t have an answer. It was, at best, scrambled.

The Brazilians failed to make open shots and carelessly created their own turnovers. The U.S. took advantage of it and scored easy baskets. This steal-and-convert was probably the only bright spot for the Americans at the game.

Although the biggest stars are not in Turkey, this U.S. team has several players making the maximum or close. They must be good, right? However, this group struggled to score 70 points against a normal half-court man defense. And if Chauncey Billups was not there… Well, it would have been over.

Writers covering Team USA’s training camp came away believing that nobody would play more than five consecutive minutes so that they could play with all-out physical effort and a suffocating pressure defense on opponents’ ballhandlers. Really? Where did this philosophy go? It surely was not there against Brazil.

In Saitama four years ago, Greece disabled the USA with this world-wide play scoring nine straight times. Well, here we go again with the Brazil pick and always rolling to the basket, causing overreaction from the defense. The penetration-and-pitch theory was exploited, but this time Brazil didn’t make the shots. Still, the pick-and-roll defense by the USA was more than inadequate: It was poor.

The American NBA player has extreme difficulty against a team defense that employs help side man. They don’t see in the league and the adjustament is not easy when you play FIBA ball.

For this group to win, they need breakouts – which result in points in the paint or getting fouled. The USA has a strong-willed player or two (Billups!) plus the quickness to convert from defense to offense. But if they settle for the half court… Well, there will be trouble.