Nenad Krstic: "I deserved the punishment"

Nenad Krstic: "I deserved the punishment" 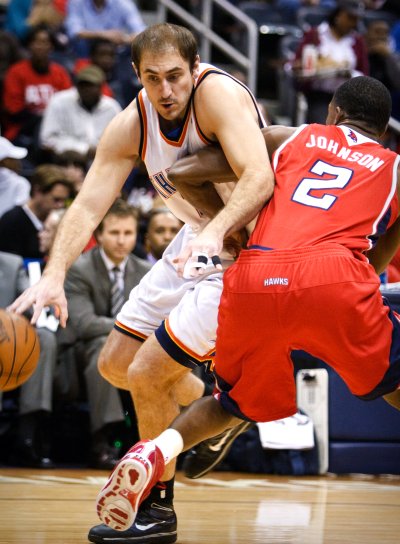 Serbia had some terrible tournaments before the 2009 Eurobasket. How did you turn it around to be competitive again?

Nenad Krstic: Just different kind of players. We had very good talent. We were the youngest team in the tournament. I think of course we have a great coach too. I think that’s the main difference.

Do you miss the players from Montenegro? You could have (Wolves forward) Nikola Pekovic now, for example.

Who do you think is the best center here at the World Championship?

NK: I don’t really know. There’s a couple of guys at a really high level right now, but there’s not many dominant players. Scola is dominant right now, but he’s more a 4 than a 5. He’s really dominating the game. But other than him, everybody is playing pretty much the same.

How do you feel about your NBA career so far? Is it everything you expected it to be?

NK: You know, it is ups and downs of course. I started really good three years playing at a very high level. Then I had the injury and I didn’t play for one year. Then I had like a new episode in Russia. Then I came back and now I’m really happy with the Oklahoma City Thunder. We have a young team, similar to what we have here (with Serbia). Last year nobody expected us to play well, but we made the playoffs. I had a good year last year. Different role to the one I have here or with New Jersey. But, you know, I’m happy.

What’s your role in that locker room with so many young players? Are you like a veteran leader there?

NK: Not really. Just trying to do some small things on the court and off the court. I think we have a good chemistry over there, so everything is good.

Do you think you’re going to start over Serge Ibaka this year again?

Why do you think Scott Brooks has connected so well with the players on the team?

Is it a disappointment if you don’t make it to the second round of the playoffs this year?

NK: Not really. It’s too early to talk about that. Training camp didn’t start yet, so we’ll see. Our goal is some day to win the championship. But we’re young and our focus right now is getting better.

Is there a different mindset for you this year since you become a free agent after the season?

NK: Not really. I’m from Europe, so I’m not thinking like that… I’m thinking about the team.

NK: I’m just saying I’m from Serbia and I never think in that way. Don’t put the words in my mouth. I’m just saying I never think in that way like, “It’s my contract year and need to be selfish and not pass the ball and score more.” I understand that if the team is playing good, I’m going to get the contract. Everybody is going to get it. If team is playing bad, I might play good, but it doesn’t matter.

Is your plan to stay in the NBA after this contract is over?

Do you think your punishment after the Greece-Serbia brawl was fair?

NK: I deserved it. But I didn’t deserve the talk in the newspaper. I’m not one person to get in fights on the court, but I was just trying to protect my teammates.

Like you said, you don’t look like a guy that’s going to get involved in fights. What happened to you there?

NK: Nothing. I think everybody who knows me knows that I’m going to have their their back if there is a fight or a problem or anything like that. I always have my teammates’ backs. So there was a fight, I saw my teammate lying down on the court and I tried to help. And they attacked me and whoever attacks me, I’m going to attack him.