Rudy Gay: "I wasn't sure I would re-sign with Memphis"

Rudy Gay: "I wasn't sure I would re-sign with Memphis" 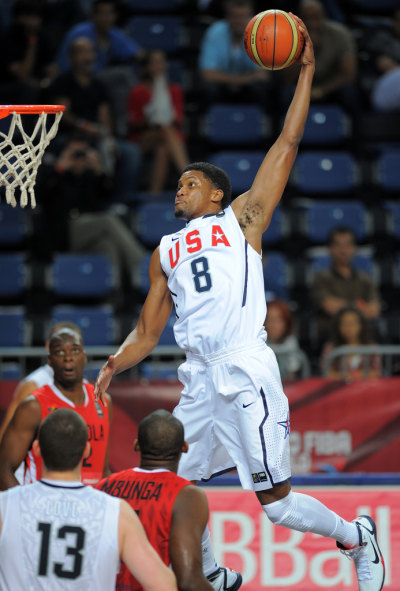 How is the adjustment of going from playing 30-something minutes to playing much less here?

Rudy Gay: At first, it was an adjustment. But now I know I can keep myself ready. Every time I get out there, I have to play as if I start. We are all good players here and play as if we are starters. Play consistently and also with passion.

Is the competition here at the World Championship what you expected it to be?

RG: Yeah, definitely. All the teams are playing with pride for their country. I expected that. And so are we. I expected it to happen from the jump.

Was there any lesson learned from the game vs. Brazil, where you struggled a little bit?

RG: Yeah. They had their shot. That let us know we can lose. A couple of balls bounce in and we lose the game. Now we know.

Do you feel like the gold medal is yours if you play well and there’s not much the other team can do about it?

You re-signed with the Grizzlies this summer. What was the prevalent feeling when you got the big contract? Relief?

RG: I wouldn’t say it was relief. I think that for the most part it’s me assuming a new role with the team and understanding my role. With money comes a lot of things that people put on you, so I’m ready for that.

Was this past season a little different for you because it was a contract year?

RG: No. I mean, this season was different for me because we won and we had a different feeling going on with the whole team. We had a winning mentality and we got into a spot of expecting to win games. That’s the only difference I had.

Did you get the feeling all along that you were going to re-sign?

RG: No, I didn’t all. I didn’t know. I wasn’t sure for the most part. But at the end of the day, I guess home is in Memphis.

Aside from re-signing you, the Grizzlies had a quiet offseason. What are your thoughts about it?

RG: That just reassures me my future is with the team and I guess it showed some kind of dedication to me, because they did that first before getting anybody else. It’s a little bit of respect.

Who’s going to be the go-to guy on the team?

RG: We have a lot of great players. I don’t think we had a go-to guy last year. Everybody contributed. In different games, people stepped up. That’s the good thing about our team – that at any point anybody can show up.

Is the All-Star Game a realistic goal for you this year, especially considering all that talent that has moved to the East?

RG: I think so. I hope so. I definitely feel as I can compete on that level. And hopefully I do. Not just this year, but on a consistent level.

Are you hoping to be a member of the U.S. team in London in a couple of years?

Do you think the effort you made by coming to the Worlds will be taken into consideration?

RG: I know when they make their picks, a lot of that will have to do with the history of playing with USA Basketball. I’m kind of a seasoned veteran at that. Hopefully they used that in my favor.

I want to ask you about the Lorenzen Wright death. It seems like Memphis is becoming kind of dangerous. Is there any level of discomfort for you being an NBA player there?

RG: No, there’s no discomfort for me because anywhere we go we’re targets. I jusr feel as decisions… Not to take anything away from, but the decisions we made absolutely impact your safety. Hopefully he was making good decisions and the people that did it get caught. But really… When it’s your time to go, it’s your time to go.