Danny Granger: "Me and Collison can be a lot of years in Indiana together"

Danny Granger: "Me and Collison can be a lot of years in Indiana together" 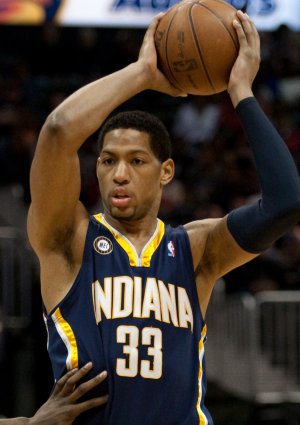 Is the adjustment to FIBA basketball a little hard for you?

Danny Granger: Yeah, it’s a little different. With the closer three-point line, the lanes a little more clogged. It’s a little more physical than in the NBA, so there’s a few adjustments you have to get accustomed to.

What’s the biggest weakness of the team?

DG: I think our only weakness is our rebounding. That could quite possibly be a weakness. Rebounding is about effort, hustle, intensity, so if we do that, our rebounding should be OK.

What about the half-court offense? It seems you struggled a little there in the game against Brazil.

DG: The offense can be a little stagnant at times, you know. That’s why we try to put pressure on other teams defensively so we can get to fast breaks and open-court situations so we can avoid half-court offense.

How competitive do you think the Pacers will be this year?

DG: I think we will be a better team than we were last year. We have new pieces. We lost Troy Murphy, but we added a lot. So I think we definitely have some room for improvement with the new point guard and some of the acquisitions we made. We’re going to be OK.

How do you feel about that new point guard, Darren Collison?

DG: I think he’s a very good point guard. He played in New Orleans and he was very effective playing down there playing with that team. I think he has a lot of potential to become a very good player in the NBA.

Do you feel he can be your sidekick in years to come?

DG: I think he can. He’s young and I’m young. I think we can be a lot of years in Indiana together.

How much does all the losing wear on you as a player?

DG: It’s very tough when you lose for the last two or three years when you’ve been so close to making the playoffs, and we never quite made it. It’s always been tough and hard to deal with, so hopefully we try to get out of there soon.

The Pacers have been in the news for the wrong reasons with Brandon Rush and Lance Stephenson. Do you have any comment on that?

DG: Not really. (Stephenson) is a young kid. No one knows what he did yet. This is just a young kid who made a mistake. He’ll bounce back from it because he’s very talented.

They are not letting Lance Stephenson inside the arena. Do you think that’s a good measure by the Pacers?

The deodorant comment. There was a lot of people complaining about it.