Tyson Chandler: "Anything less than the gold is a failure for this team"

Tyson Chandler: "Anything less than the gold is a failure for this team" 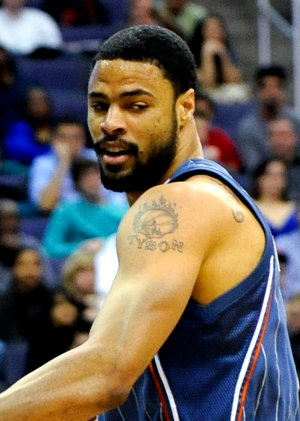 How’s been the experience at the World Championship for you so far?

Tyson Chandler: It’s been very good. Every time you get the opportunity to play for your country and play with guys of this talent and this caliber, it’s an amazing experience.

Winning just the silver is a failure?

TC: Yeah. We came to win gold and anything less is a failure for this team.

Who do you think is the toughest opponent remaining?

TC: It’s not for me to say. I could have said at the beginning of the tournament that Spain, Greece, Argentina were the toughest opponents. But all of them are gone, so you never know. Any given night anybody can be the toughest opponent depending on how much respect you have for them walking into the game.

Did you watch the Lithuania game?

TC: I did, I did. I didn’t expect it to be such a loopsided victory for Lithuania. I thought it would be a great game. Like I said, you never know in this tournament who’s going to come out victorious, but I did think it would be a lot closer than it was.

Is being with this team and getting a chance to win a gold medal the biggest accomplishment of your career?

TC: Yes, so far, yes. Besides getting drafted, it’s definitely the biggest accomplishment.

You have been traded several times in your career. Which trade was the toughest?

TC: Last year, going from New Orleans to Charlotte. It was going from a situation where I thought we had an opportunity to compete for a championship… Then I was coming off an injury. Spent the whole year just trying to get healthy. Had surgery that summer, I rehabbed and really wasn’t ready to come back… So I was trying to force the issue because of the trade because I wanted to be successful with the new team. I wasn’t ready. So that was the most difficult trade.

When you get injured, do you feel there’s some kind of pressure from the organizations to get back?

TC: I felt pressure from myself. I’m such a competitor and I hate sitting on the sidelines. I’m feeling like I let my teammates down when I hurt. I know it’s not something you can control when you’re just not physically able to go, but I always feel like I’m letting my teammates down. I feel like if I was out there, we would get a better chance.

What was the feeling when that trade to Oklahoma happened and was later rescinded? How do you feel when you’re back with a team that has tried to trade you?

TC: It’s like so in the past that I honestly forgot about it. At the time… I’m a professional. So regardless of where I am, I’m going to come out and do my job.

Has your NBA career lived up to your own expectations?

TC: I don’t know if I had expectations about my career. The only expectation I had was to come out every day and play as hard as I can and every year try to get better. I think I have done that so far in my career.

What is left from the Tyson Chandler that entered the NBA nine years ago?

How were those first years in the NBA? Was everything going too fast?

TC: It was tough because I got drafted to an organization that was in transition itself. It’s kind of tough for a young guy to come into a place that’s not already established, that doesn’t have a good foundation for a young kid. I’ve had plenty of things turning around me between trades, different general managers, different head coaches throughout the years. It’s tough to adjust to it.

Do you get cynical at some point because of the way business works in the NBA?

Do you expect to start for the Mavericks?

TC: We’ll see how things go. I’d obviously like to be on the floor a lot. I feel like the coach is going to do whatever gives us the best opportunity to win, that’s what he’s going to do. My job is to come in and be the best player I can be. And I’m putting myself in that situation with everything that I’ve been doing this summer.

Chris Paul helped your career in New Orleans with all those alley oops. Do you think you can get something similar with Jason Kidd?

It’s a contract year for you and there’s the possibility of a lockout at the end of it. Any thoughts on that?

TC: No, I didn’t look so far. Right now I just have to concentrate on getting better and being the best Tyson Chandler I can be. If I’m that, everything else will fall into place.