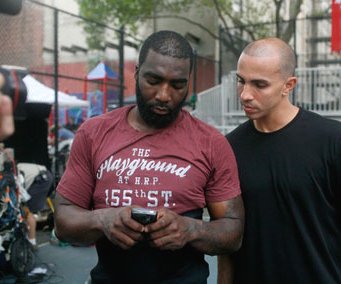 How are you feeling right now?

Have you spoken with him?

GS: Yeah, it’s all good. You know in this league there can only be one non-Chinese player on the court at the same time, so we’ll split the minutes at the point guard spot. This is my fifth year in China and it’ll be fun.

Will Allen Iverson join you?

GS: I’ve heard about the rumors about him getting an offer, but I think he turned it down so I don’t know if he’s finally coming.

Looks like a trend – great point guards going there.

Do you think China is getting closer to the European level?

GS: There’s more NBA players going to China than anywhere else, so you can say China is catching up with Europe.

After these years, how much has the league grown?

GS: When I went there for the first time, it was me and another American player. Now every team has a former NBA American player. Because of the Beijing Olympics, there’s now a lot of new stores, restaurants… One thing they should have to change is the court-time restrictions on foreign players. Then the league would be much better.

You have followed an international path in your career, but I’m sure you’ve had plenty of chances to return to the NBA.

GS: After playing two seasons with the Washington Wizards, I had invitations to go to some NBA training camps, but the money they were giving in China… I had to look after my family.

And then there’s the schedule conflict: NBA training camps are held in September, when the leagues of the rest of the World are almost under way. And there’s guaranteed offers against non-guaranteed contracts.

GS: Yeah, one time my friend Jerry McCullough did that and it didn’t work out well for him. He was an MVP in Turkey in 2000 and then he turned down a very good offer to re-sign with the team. I think it was like $120,000. He went to the Mavericks’ training camp instead. Then they cut him, but then the Turkish team had already signed another player. McCullough played in the CBA that season for way less money, like $50,000. You can guess he was upset after that. So ever since I’ve seen that, I always stuck the guaranteed money.

What have you learned living a basketball career around the world?

GS: The passion for basketball is so high outside the U.S. Real high.

I think you’re a good friend of Chauncey Billups.

GS: I spoke to him during the summer, before he went to Turkey. He comes to New York and we hang out together. Whatever happens with Carmelo, I’m sure Chauncey is gonna be OK.

What’s your plan for your career now at 33?

GS: It’s good. I’m gonna play about two more years, something like that. Then I want to coach at my school… I train people on how to improve their dribble, people like Ben Gordon and other NBA players. I got a lot of things going on when I’m done in China in April. I have a lot of stuff with Converse, will train my son, other players… it’s going to be a pretty big summer.

Tim Grover is a guru master for conditioning. Maybe you will become the master for dribbling skills and make a career out of it.

GS: Yeah, I’ve just been working out with friends, and hopefully things can grow. The things I’m doing, nobody is doing it, so it should work out good.

Who is the best point guard right now?

GS: Chris Paul and Deron Williams. Maybe Chauncey… It depends on what do you want for your team.

And who is the point guard with the best dribbling skills?

You were born in Brooklyn, grew up in Manhattan. If 15 years ago, somebody comes across you and says, “There will be an NBA team in Brooklyn and it will be owned by a Russian,” would you have believed it?

GS: No, I would have never believed it. But is a beautiful thing, though! It’s a good thing for the NBA, for the United States. Everybody should get along, and it’s good that basketball can help a little bit. You have baseball and American football, but it is basketball that connects countries.