Chris Grant: "We've got a group that fits well with Scott's system"

Chris Grant: "We've got a group that fits well with Scott's system" 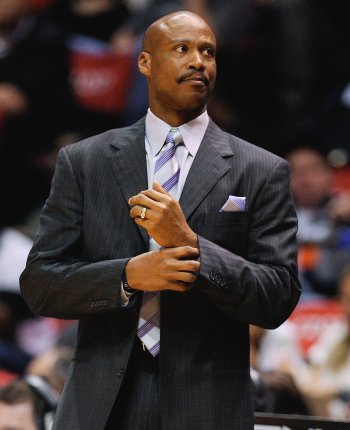 Cleveland’s pro basketball team experienced the worst kind of transformation this past off-season, losing the NBA’s back-to-back MVP and receiving little in return.

On top of that, the Cavaliers replaced their general manager and practically their entire coaching staff, aiming to fit pieces and parts around holdovers from a 61-win team. In spite of it all, today’s Cavs are energetic, optimistic and as point guard Mo Williams indicated, extremely motivated and playing with a little bit of a chip on their shoulders.

The rebuilding (or more accurately, re-purposing) falls in the hands of new GM Chris Grant, who spent five seasons under Danny Ferry as an assistant GM, and 10 years before that with the Atlanta Hawks.

Grant took some time to answer questions about the 2010-11 Cavaliers for HoopsHype:

What are your overall impressions of the Cavaliers heading into camp?

Chris Grant: We’re excited to get on the court and see the team with Coach (Byron) Scott and his staff. We feel we’ve got a group that fits well with Coach Scott’s system. We’ve got a talented group of guys that is accustomed to winning and knows what it takes to win, so we’re eager to get started and see them work.

This has been a summer of great change for the organization. Is the roster finally set, or are you still looking to make some moves?

CG: We feel good about this group heading into camp. Of course, we’ll continue to approach this from an opportunistic perspective throughout the season as we always do. If there is a move that we feel makes sense and puts us in a more desirable position, we’ll certainly look at that. We have flexibility and we’ll continue to value that.

Is the organization extra motivated to prove it can be a factor in the East now that everyone has seemingly written it off?

CG: Internally this group has a culture of winning and success. We are not going to put any limits on our players. Our group is eager to practice and play.

What impresses you about new coach Byron Scott?

CG: Byron is a proven winner and his excitement and energy is contagious. He is incredibly confident and focused no matter what the challenge.

Former GM Danny Ferry once credited you with finding Christian Eyenga. What do you like about his game and how ready is he to contribute?

CG: Christian is really just starting his basketball journey. His athleticism is off the charts, but his learning curve right now is huge. He has a great deal of potential and it will be fun to watch him develop.

What do recent acquisitions Ramon Sessions, Ryan Hollins and Joey Graham bring to the team?

CG: Ramon is entering the best years of his career and he can really help us in the backcourt with his quickness and ability to move and create. Ryan is a young, athletic big who can get up and down the floor and could fit well with Coach Scott’s system. Joey is a hard-working, tough, smart player who has earned time everywhere he has been and we think he is also a good fit with Coach Scott’s system.

Do you think the Cavaliers, as they stand today, are a playoff team?

CG: We certainly won’t limit the team, but we’re not going to try to predict wins or label the team. Having said that, we’re going into the season with a clear focus on winning.

Sam Amico has covered the NBA for various publications for more than a decade and is a regular contributor to HoopsHype.com