Memo to Lakers: It's our gym

Memo to Lakers: It's our gym 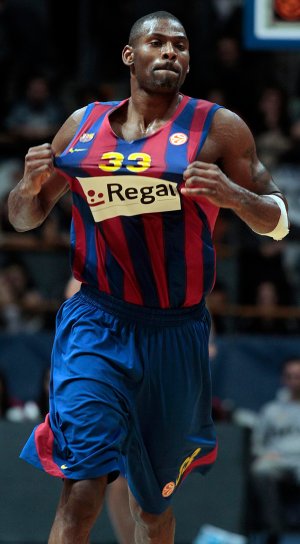 Just joking, but it’s been a crazy day for me after playing a good game and beating the Lakers last night. Lots of phone calls answered and autographs signed.

You know, the funny thing is, my friends in the States and my family got to watch the game on ESPN2 and now everybody is calling. I’ve been getting calls from Korea, from the Philippines, Greece, the States… Everywhere. They are all congratulating me about the game. Everybody watched the game live, which is great. Having my people watching me play live was the best feeling.

But for me, this was just a game, a competitive one. Us winning this exhibition game was not the greatest feeling. What I liked is the chance to play against some of the best players in the world. Getting the chance to guard players one-on-one and stopping their drives every chance I could. That’s the biggest challenge. I was able to take the job against Kobe. I took it pretty personal.

OK, it was a good performance and the U.S. media got the chance to see me play. I’m American, so it was a great experience to play against an NBA team.

I got the chance to speak with legend James Worthy during the game. When I was shooting a free throw, he told me “Hey, I read your HoopsHype blog, and I like it” and I said “cool.” It’s great to have a Hall Of Famer who reads my blog and have a conversation with him during the game! Things like that, having legends like him to come to Barcelona and respect the way you play and you say is big.

One hour before the game I was told Ron Artest said “Pete who?” when they asked him if he knew who he was going to guard. Anyway, it really doesn’t matter what he said. It had no factor the way I play. He doesn’t even have to know me at all. I could care less what any guy says, good or bad. I’m a team basketball player. He started off physical, tried to show his physical strenght, and I didn’t back down at all. This is our gym, our home, they came to Barcelona to play us. I don’t really want to get into what happened with Artest on the court. I don’t know him at all, just saw him on TV and I had never played him.

The fact that the winner of the Euroleague beats the NBA champion gives more opportunities for the media to debate if FC Barcelona can compete in the NBA. For the world of basketball, it’s a great thing. Now people in the States know who FC Barcelona is. It’s not just Ricky, who might play in the NBA soon, but a roster full of great players. This helps us worldwide. That’s what I love about this game. To come out and compete, that’s great. It’s all about competing – competing against guys bigger and stronger. No matter what league you’re playing. I don’t care if Kobe Bryant won five NBA championships. This was just a basketball game and I focused on doing my job.

Phil Jackson said we wouldn’t have a chance in a 82-game NBA regular season. Well, look at what Kobe said after this comment. Kobe, who is a basketball player, not a coach, disagreed. It’s different being a coach and actually being a player. Kobe, obviously, has respect for FC Barcelona because he competed against us for 25 minutes. He didn’t played team basketball, or passing the ball, he was playing too much one-on-one. Here it’s kind of a different game. The NBA is a great, great League. But here in Europe there is good basketball too.

Kobe said to me “Hey, this game might get you in the NBA,” trying to be a smartass. “If you think that, then put your money where your mouth is,” I replied. “I put my $10 million against your $100 million.”

It was a competitive game, and that’s what I liked the most apart from my friends and family watching me live.

We’re in the right direction.

Talk to you soon!