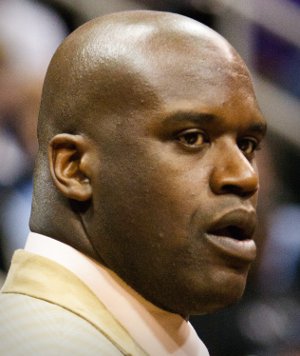 Given that Shaquille O’Neal is more of a comedian than hoopster these days, the ideal nickname for the newest Boston Celtic is Shaqqy Green.

For decades Shecky Greene was a headliner in Las Vegas, but he’s 83 now. He’s still funny, but he’s retired; it’s been years since he’s been a top comic. Likewise, Shaqqy can still mosey up and down the court, but he barely resembles the turn-of-the-century superstar. Just when you thought Rajon’s Rondoliers couldn’t get any older and slower, they did. By mid-season Shaqqy could degenerate from comic to punchline.

It’s been a long, steady decline for Shaq – partly because he put on too many pounds, but mostly because, starting around 2003, he allowed his scoring skills in the 8-to-10-foot range to slip. Those had become quite good by the late 1990s, with quality jumphooks and one-hand tosses off the glass over his left shoulder and short jumpers over his right. Nevertheless, going all the way back to his rookie season, he has used illegal brute force (and the kindness of clueless refs) to supplement the legit aspects of his game. Over the last six or seven seasons, as his effective shooting range shrank, he became dependent on illegal brute force.

Younger fans may not realize it, but long ago, when the NBA wasn’t run by morons, bouncing your defender backwards with your hips and using your lead shoulder as a battering ram were considered fouls, not “moves.” Nor could you “walk your defender” –  heavy-machinery style –  under the basket, spread your arms and legs far and wide, and make yourself at home. Bulk and strength were assets (so long as they didn’t slow you down), not weapons. That is why, in the 1970s, puny Alvan Adams could play center and sweet-shooting powerhouse Darryl Dawkins didn’t have the option of bulldozing his way to greatness.

Getting back to Subprime Shaq (2003-10), although he continued to get away with plenty, his growing dependence on brute force made him more vulnerable to foul trouble, as he’d draw an occasional whistle for steamrolling or creating space with a deliberate elbow to the face. The foul trouble was exacerbated in 2005 when Stan Van Gundy and Pat Riley encouraged him to imitate defensive dynamo Michael Doleac by trying to draw charges. More fouls meant more pine time, and by rewiring Shaq’s defensive instincts to always get in the driver’s path, the Heat braintrust set Shaq up for a thigh injury courtesy of Jermaine O’Neal’s knee, which wrecked Miami’s 2005 playoff hopes, and a knee-on-knee collision with that great offensive threat Chuck Hayes early in the 2006-07 season, which put Shaq on the shelf for 10 weeks following cartilage surgery.

Here are some other lowlights, beginning with his last season as a Laker:

In the 2004 Finals a 32-year-old Shaq was neutralized (just as I predicted) by Detroit’s unsung hero, Ben Wallace, the player Shaq could never get into foul trouble. Wallace eliminated a hobbled Shaq in 2005 as well. In 2006, Shaq finally got past Big Ben, but in the Finals he barely held his own against the man he once disparaged as “Ericka” Dampier, shot 14 for 48 (.292) from the line, and would have been fitted for goat horns were it not for the heroics of Dwyane Wade. The following season Wallace and the Chicago Bulls swept Shaq and the Heat in the first round. A stint in Phoenix as “Cactus Shaq” was an early comedic hit but bombed in the 2008 playoffs (with Shaq Doleac again getting himself in foul trouble trying to draw charges) and missed the 2009 playoffs entirely. The following season’s “Ring for the King” became “Job Loss for the Boss,” as Cav coach Mike Brown got the ax.

Shaq helped to dash the Cavs’ 2010 title hopes when, on February 25, he went fishing for a phony foul and in the process put his thumb in harm’s way, where Big Baby Davis whacked it sufficiently hard to tear a ligament. One of the growth industries in David Stern’s NBA is shooters who lift their arms in preposterous directions (“preposterous” if their objective is to make the shot) to create contact with a defender’s hand or arm that wouldn’t intersect with a normal shooting motion, in the hope (often realized) that an incompetent ref will call a defensive foul.

Instead of going straight up for a little jump hook after dribbling into the lane, Shaq executed an unnatural two-part shooting motion – first extending his arms forward, parallel to the floor, and then lifting them to shoot. Shaq didn’t reach Davis with the forward extension, but he did give Davis a good whacking target (not that vicious whacks should be considered legit basketball plays). If Shaq had employed a normal shooting motion, focused on making the shot, he almost certainly wouldn’t have gotten hit or hurt. So just as Shaq was getting into a groove, he was gone for the remainder of the regular season, destroying any chance of team continuity heading into the playoffs.

Shaq will turn 39 this season. In the season when Kareem Abdul-Jabbar turned 39 (1985-86) he averaged 33 minutes and 23 points – and 35 minutes and 26 points in the playoffs. His diminished athleticism and reflexes took their toll on his rebounding numbers, but unlike Shaq he had made a concerted effort to keep sharp his scoring skills beyond six feet, and this enabled him to be an effective starting center on the 1987 and 1988 title teams at the ages of 40 and 41. Kareem at 39 would not have been Jermaine O’Neal’s backup or Kendrick Perkins’ fill-in. Such are the depths to which Shaqqy has sunk in his quest for a fifth ring.

Yes, in the playoffs his ability to dislodge opposing centers into foul trouble – a ludicrous concept, but all too real in Stern’s NBA – could pay off big against Orlando and the league’s second-best dislodger, Dwight Howard. Jeff Van Gundy has noted what a valuable asset that is for Shaq’s team, especially when the opposition counts on its starting center for major minutes. But ESPN’s top analyst hasn’t figured out what a horrendous commentary that is on the league. Pivot play should be about skill, quickness, footwork and finesse, not a test of strength where the onus is on the defender to prevent his own dislodging.

I will be fascinated to see how Tommy Heinsohn – a Celtic legend as a player, coach and broadcaster — reacts to Shaqqy Green’s basketball act. I recall a game, probably from 2007-08, where Tommy and guest-analyst Bob Cousy responded with absolute disgust when the Miami Heat’s Shaq drew a foul on Kendrick Perkins, who was being bounced backwards repeatedly by Shaq.

For my money Tommy was the best national TV analyst the NBA has ever had (he was on CBS in the mid-1980s), but when he’s on the local Celtics broadcast he looks at the world through green-colored glasses. He can make a great contribution to a game that has lost its way by pointing out the absurdities of modern pivot play and how the rules of the 1960s and 1970s on the use of force and what constitutes traveling (e.g., no hopping and jump-stops permitted) and offensive three seconds made so much more sense.

Shaqqy Green opens in Beantown this fall and hopes for a two-year run. Will the crowds be laughing with him or at him? Will he stick around long enough for a postseason Dislodging Duel with Dwight Howard? Will that nonsense still be considered “basketball”? Stay tuned.