Derek Fisher: "I'm hungrier than ever about winning the ring"

Derek Fisher: "I'm hungrier than ever about winning the ring" 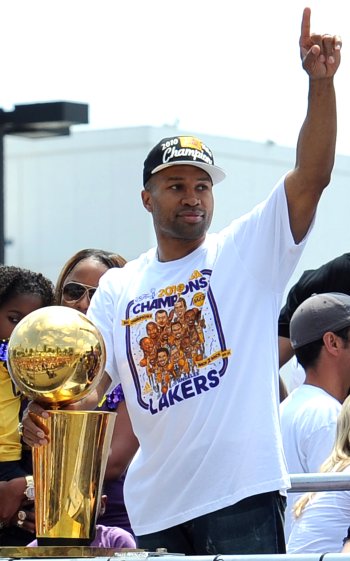 How was that pitch by the Heat? How close were you to signing with them?

Derek Fisher: (With) the Heat as well as other teams I spoke during the summer, it was a process that I enjoyed. I got a chance to work my way through a lot decisions and priorities, but at this point of my career I still feel being on the Lakers, being in L.A., it’s just the best place for me. I have a tremendous amount of respect for Pat Riley and the Miami Heat organization.

How do you say ‘No’ to Pat Riley? He looks like such a convincing guy if you look at what he did this summer…

DF: (Laughs) Saying ‘No’ to Miami and other teams was really not as much about saying ‘No’ to them as much as was saying ‘Yes’ to my teammates and my relation with Kobe Bryant, saying yes to the city of Los Angeles and the fans… Saying ‘Yes’ to what we’ve built there, recognizing we have a team that can win the championship again this year, and hopefully more championships to come. So I didn’t really view it as a ‘No’ to other teams, it was more a resounding ‘Yes’ to Los Angeles.

How much of a distraction during the season is being the president of the Players’ Association. Does it take some of your focus away from playing?

DF: No, it won’t take my focus away from playing. I’m a very focused and disciplined individual. I wouldn’t consider it more taxing or challenging than raising children at home. That is probably a more challenging thing in my life. I’m committed to my team, but I’m also committed to the players as a whole, and I feel confident that I’ll be up to the balance them and still be able to play well on the court.

As far as athleticism, do you think the Lakers can keep up with a team like the Thunder, for exmple?

DF: If it was track and field, I would say ‘No’. But since it’s basketball, I think we can figure out ways to be effective against any team. Oklahoma City is one of those teams that will be back, but if we play the game the right way, it doesn’t really matter who else is good or talented or athletic. At the same time, there will be teams like Oklahoma City, Portland, Dallas, Denver (depending on what happens with Carmelo) that will be very good. It’s gonna be just as challenging or more of a challenging season that we had in the last couple of years.

Are you as hungry now about winning compared to those years when you hadn’t won any ring?

DF: Being successful in life is never really about obtaining something and that being the goal… The goal really is the journey and I continue to be a part of this great journey on the Lakers, where winning a championship it’s not the aim result. It’s about sustaining excellence, it’s about being a champion as many times as you can. We have the chance as a team to be champions this year. There won’t be anything in regards to NBA basketball that will take precedent over winning another title this season. That’s just how bad I want it, and I think everybody on our team feels the same way.

Robert Horry won a lot of rings too, but once he was asked if he would trade his career for Charles Barkley’s. And he said ‘Yes’. Would you do that, change the titles for having that superstar status that Barkley enjoyed?

DF: Nooo. Nah. I wouldn’t. Robert has seven rings, so if I have the chance to win eight, then I’d give one back to maybe have one season like to be a superstar. That would be about as far as I would go as far as giving up the rings.

Which job would be most appealing to you when you retire? Would you like to be an executive, head coach…?

DF: I’d rather be an executive at this point. There’s some things that could continue to help push the game in a positive way from an executive position.

But working for the league or for a team?

DF: I would say more from a team perspective. Being involved into key decisions, not just personnel-wise in terms of talent and players, but some larger things in terms of the type of culture and the way an organization should operate. Those are things that interest me more than coaching right now.

Is that more a ‘Yes’ on being an executive or ‘No’ to the coach life?