My 25 questions to begin the season

My 25 questions to begin the season 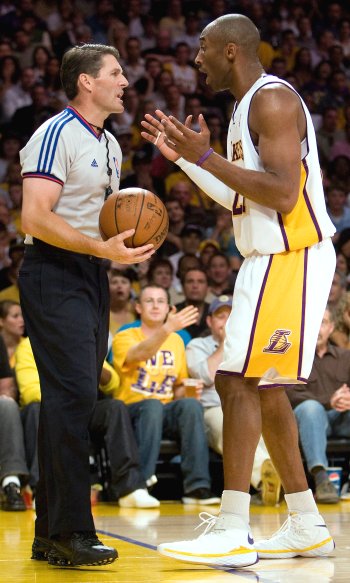 1. Don’t want to criticize the refs. I think they are doing exactly what they were instructed to do. My question is about the actual instructions… I have seen guys get techs for frowning after a questionable call, sighing, shaking their head, asking a question in a respectable manner, etcetera. I understand some players were doing way too much complaining, but isn’t this new zero-tolerance rule a bit too much?

2. Last week after meeting with the NBA CEOs, David Stern suggested cutting at least $750 million in player salaries (more than a one third reductio). Does he really think this is something Billy Hunter would ever agree to?

3. David Stern said fans may see “some of the greatest basketball ever played” this season. He went on to say, “We’re going to have, really, our most successful season.” With this type of excitement, wouldn’t it be absolutely asinine to have a lockout after such unbelievable season?

4. With the NBA at one of its highest points ever, doing better worldwide than ever before and with the ability to tread water in the wake of the worse economic environment since the Depression, wouldn’t this be the absolute worst time for a lockout?

5. According to analysis, a one-year lockout could cost the NBA CEOs about $1.2-1.5 billion. In the past, NBA CEOs believed they could just cover the losses of any work stoppage out of their pockets, but according to analysis the losses would, in fact, be severe. And even though the league would continue to receive certain national TV payments during the lockout, those payments would merely be loans that would have to be repaid to the networks out of future years’ payments. So my question is… Wouldn’t it be in the NBA’s best interest to stop playing hard ball and work out a deal that works for both parties?

6. Do female reporters really have to conduct their post-game interviews with players right when we come out of the shower? Should there be a dress code for reporters? And are male reporters allowed in WNBA locker rooms while they are getting dressed?

7. Since the Ines Sainz fiasco, everyone has been walking on egg shells in our locker rooms with female reporters. Wouldn’t a better system be that the reporters pick a certain number of players that they would like to interview after the game? Instead of coming into the locker room, after the player is fully dressed he could be required to go to a media room to give post-game interviews.

8. Was a swastika really painted on a mural of Omri Casspi in Sacramento this past summer, and when it was washed off another one was painted a second time? And again a third time? Do hate crimes like this still happen in America in 2010?

9. Since living in Georgia this season I’ve probably seen more confederate flags than I had my entire life. Do people really still fly that symbol of slavery, evil and hate now in 2010?

10. Mayor AC Wharton made a promise to Lorenzen Wright‘s mother after his murder that “justice will be done.” Weeks later that promise has yet to be fullfilled. I am not even going to repeat the horrible rumors I have heard, but is this going to be another case of an investigation that falls by the wayside?

11. Do the Clippers really not give their own players 24-hour access to their facilities to practice and work on their games because Donald Sterling wants to save money on the electricity bill? Guess turning on the court lights isn’t a worthy investment to him.

12. ESPN conducted a poll of how people felt about LeBron across the race line. Isn’t it interesting that 65.2 percent of black fans favor him while only 32.6 percent of white fans do? How can this difference be explained?

13. Why wasn’t Josh Smith an All-Star last year? And how is Joe Johnson still so underrated? Last season, he posted averages of 21, 5 and 5 on a team that won 53 games.

14. Why does the media keep trying to vilify Jamal Crawford for wanting an extension? Don’t they understand the nature of the business is to obtain job security? And where is it documented that he told the team “Pay me or trade me?” Or is that something they made up?

15. Did the host of a radio show in Cleveland called Rover’s Morning Glory really hire a witch doctor using bones, blood, and a LeBron James jersey to put a curse on him for leaving via free agency? Seriously, Cleveland fans? Seriously?

16. Would anyone object to changing the NBA logo from Jerry West to Michael Jordan?

17. Is this going to start a trend of NBA personnel (CEOs, presidents, GMs, whoever) publicly defaming the integrity of an employee (player) if he opts to leave via free agency?

18. Are you officially old when you don’t know any of the slang that your teamates are using? Or you think how they dress looks absolutely horrible? (Skinny jeans will always be terrible to me). This happened to me a lot while playing with the Oklahoma City Thunder last year, but to my defense Oklahoma City was the youngest team in the League.

19. Craig Sager is the nicest guy. He approaches each interview with enthusiasm and professionalism. But are his suits getting more outrageous each season?

20. Why does the media keep questioning if John Wall and Gilbert Arenas can play together? They look pretty good to me.

21. Why couldn’t Allen Iverson get a job anywhere in the NBA?

23. After seeing Stephen Jackson‘s home invasion last summer, Eddy Curry and his family being tied in his basement at gunpoint a few summers ago, and countless other examples, can you really blame any athlete for having a (legal) gun in his home to protect his family?

24. Mike Wise of the Washington Post was suspended for a month for posting a phony scoop on Twitter, an experiment to see how widely it would be picked up. Later he admitted this was a very poor decision, but did he make a good point? Why is there no verification process, or checking of facts or sourcing when reporters (using social media or not) write stories before it is accepted as factual?

25. Last summer, there was a huge controversy over the building of a mosque near Ground Zero. It was viewed by some as a “slap in the face”, “disrespectful” or “celebrating an atrocity.” But here in Georgia they have something called Stone Mountain where they actually have a light show and a big Confederacy party. Let me put this into perspective… Stone Mountain has three figures of the Confederate States carved there. People who were not only fighting for slavery but against everything that America has become today. Stonewall Jackson, Robert E. Lee and Jefferson Davis. Now, Stone Mountain was where the second KKK was formed in 1915, according to Wikipedia. In fact, the Klan had perpetual rights to hold celebrations, lynchings, cross burnings and other sick common practices. Why isn’t there any uproar about this and why isn’t this viewed as “a slap in the face”, “disrespectful” or “celebrating an atrocity?”