Chase Budinger: "I would love to enter the dunk contest"

Chase Budinger: "I would love to enter the dunk contest" 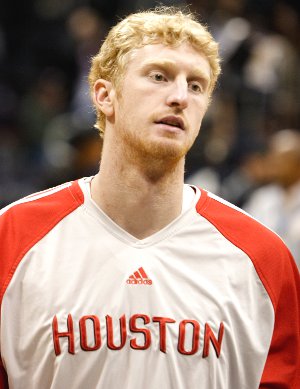 How’s the beginning of the season this year compared to last year, when you were not a proven NBA player?

Chase Budinger: The biggest thing when you’re a rookie is you don’t know what to expect about the NBA season. For your second season, you know how to prepare yourself so I’m feeling much more confident now.

Were you surprised by how well you played your rookie season?

CB: Yes, I was surprised I did very well. I got an opportunity to play right away and I tried to make the best out of it. I had a pretty good rookie season and now I’m trying to build on that season and be better this year.

Do you feel you got lucky having a head coach like Rick Adelman, that’s not your traditional conservative coach?

CB: Yes, I feel I’m very lucky to have him as head coach. He’s a great coach who’s not your typical coach that doesn’t play rookies. He’s the type of coach who just puts players who play well in practice. I’m lucky to have him as my head coach and I’ve been learning a lot from him throughout this past year and now I’m trying to be a better player for him.

What’s the key to improving defensively? You have the athleticism, so what’s missing?

CB: I just got to add strength to my body frame. That’s going to help you defensively and that’s what I’ve been working on during the offseason. I’ve got to work on my lateral quickness too, which is key on the defensive end. I hope if I do that, I can be a solid defender.

How do you feel about Yao’s limited minutes and not playing back-to-back games?

CB: First of all, it’s great to have Yao back. He’s a great person and a great player that allows us to get a lot of open shots because teams have to double him. It’s going to be a challenge for him because of the minutes he’s going to play, but for me it’s a joy to finally be able to play with him.

Do you think the Rockets will have more success this year working the ball through Yao in half-court sets or in the open court?

CB: We’re going to try to run as much as we can, but then once we’re not able to score in transition one thing we’re definitely going to do is give Yao the ball. Like I said, he’s a load down there and most team are going to double him and he always seems to give the right pass.

In which style do you feel more comfortable?

CB: I mean, I like to run firstly. But I also feel like I’m a great shooter. We’re going to use Yao in the half court, giving him the ball, so I’m going to be open to make the shot. I think I can be effective both ways.

What made you choose basketball over volleyball?

CB: I think volleyball has really helped my basketball. From the movements to jumping, things like that. It’s a great sport and I grew up doing that, but I finally picked basketball.

What kind of money does an elite volleyball player make in Europe?

CB: I’m not too sure on how much they make over there, but if you’re a good player I think you can make a few hundred thousand. It definitely doesn’t compare to basketball.

After getting selected in the second round, did you ever feel you maybe made a mistake by staying in college till your junior year?

I’ve heard that you would like to take part in the dunk contest at the All-Star Weekend this season. Is that accurate?

CB: I would love to enter the slam dunk contest. That would be a great honor and I feel like I could put on a show. Another thing is to make that Rookie-Sophomore game. That’s another goal of mine as well, to be at that All-Star game in L.A.