Hidayet Turkoglu: "The Toronto situation was bad for me and the organization"

Hidayet Turkoglu: "The Toronto situation was bad for me and the organization" 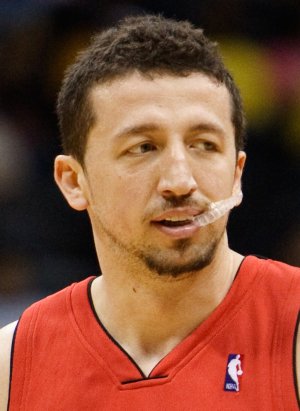 The World Championships just finished a few weeks ago and you are already in the NBA. Do you feel tired at all?

Hidayet Turkoglu: Yeah, I feel tired a bit. This was one great summer, but a very long one too. That is why I feel some fatigue. I went through the training camp, now I am in the regular season. There simply is no time… I have to give my best and just move on…

Did you get a chance to take any vacation during the summer?

HT: As soon as the World Championships were over, I flew to the States. There was no time for a vacation. It was important for me to come over here on time for the training camp and for the season.

When you look back at the World Championships and the tiredness that follows you now, was it worth it?

HT: When I look back and see what we as Turkish National Team have done at the World Championships, it was absolutely worth it. I have nothing negative to say about the experience. And for the tiredness, as Americans would say, “That’s part of the job!” It is up to me now to find some time to rest between the games and to play at the highest level I can.

What is it that motivates a basketball player to play for his National Team?

HT: Playing for a National Team results in a feeling that can’t be described through words. There is no money involved, no financial benefit. This is where a player performs solely for the crowd, for the people who live in his own country. When those people come to watch you play, when they applaud, when they give you support, the feeling that you get as a player is one of the most beautiful feelings in the world. I have been playing for the National Team for 13 years now and all I can say is that I always had a great time.

You are one of the rare NBA players who regularly answers the calling from his National Team. Do you have understanding for those players who do not do the same?

HT: That would be a question for them… Why didn’t they play and how did they feel when they received an invitation from their country’s team? That is something that I don’t know how to answer and something that I don’t care about. I have no interest to tell them something positive or negative regarding such decisions. I think only for myself it is important for me that I play for the National Team and I will play for Turkey for as long as I can. That is something that matters to me very much. You should ask others why they don’t play.

The semifinal win over Serbia was a big win for Turkey.

HT: Absolutely. After that, we made it to the finals. You know, the chemistry within the Turkish National Team has always been phenomenal. The games against Slovenia and Serbia were fantastic. In the finals, however, we didn’t have sufficient strength to match up against the Americans.

How is Phoenix going to play this year? Lots of players who were the trademark of Suns’ fast action left the team in recent years.

HT: I think we will be a good team. I, personally, need some more time to find the best form, and put myself into a position where I can contribute the most. I need to be more aggressive. This is a new team for me. It will take some time and we need to communicate, practice and everything will be OK.

When observed from the stands, the teams that appeared to have great chemistry over the past several years usually included you on their roster (Sacramento Kings, Orlando Magic). How do you compare the team chemistry you had in Sacramento and Orlando versus that which you had in Toronto last year?

HT: Oh man, don’t ask about Toronto. Over there, it just happened that the situation was bad both for me personally as well as for the organization. During the first three years in the NBA, I had a lot of luck. I had Vlade (Divac) and Peja (Stojakovic) who helped me a lot to adjust to changes in life and changes in game play after moving from Europe. They helped me with transition and I was very happy there. In Orlando, we played a different style of basketball, but that too was a great team.

Do you have better memories from Orlando or Sacramento?

You almost ended up in Portland in summer of last year and yet you signed with Toronto. During the last year, did you ever regret your decision?

HT: Never in my life have I questioned the already-made decisions. At the moment when I was signing my contract, I felt that Toronto was the best solution for me. That is what I did and I really don’t ask myself why, how, what for… Simply, that was the way I felt at that moment and I am not looking back.

What can you expect from the Suns? Do you think that you will have the chemistry here that would be similar to what you had with the Kings and the Magic?

HT: I joined the team about a month ago. I am still new here. I think that soon, after I get to know my teammates better and after I meet more people from the community, I will feel even better than now and more like at home.

With Sacramento and Orlando, you were very close to winning the ring. Do you think that you will have similar results and success with the Suns?

HT: I don’t know, we will see. It is too early to answer that question. We will see how the season shall go. You never know what will happen. We need to have a good regular season, and after that, who knows?