Welcome to my world

Welcome to my world 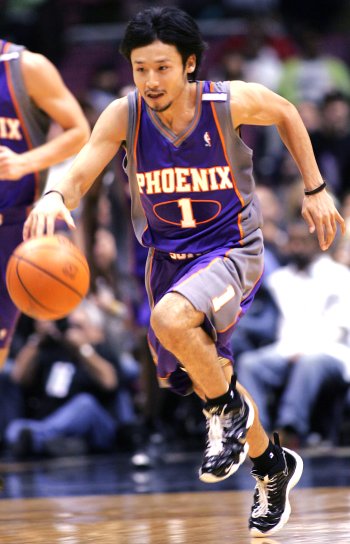 Welcome to Asia… I am delighted to present the Asian Diaries to HoopsHype.com and its millions of followers throughout the world. While the title of this blog, Asian Diaries, may read like a bad late night movie on Cinemax, I can assure it is purely basketball… with a little scandal, gossip and controversy mixed in… Just like the NBA!

My name is Jason Rabedeaux and I am currently the head coach of Link Tochigi Brex in the Japanese Basketball League. For the past three years I have had the incredible opportunity to work as a head coach in both China’s (the CBA, with the Jiangsu Dragons) and Japan’s (the JBL) top professional basketball leagues. After 150-plus games coached in exhibition, regular season, postseason and National Game competition, I have been afforded the unique and rare chance to compare and contrast the two leagues, their cultures as well as a behind-the-scenes look at professional basketball within these two amazing cultures.

With our inaugural edition of the Asian Diaries, I wanted to share with you the differences that make each of these professional leagues so unique.

While just over 500 miles separates mainland China from mainland Japan, the differences between the JBL and CBA are as different as the countries themselves.

China is absolutely infatuated with basketball and the NBA in particular. The reason? Two words: Yao Ming. With all due respect to Kobe, Tiger, Peyton and LeBron, there is currently no professional sports figure in the United States that dominates the sporting landscape like Yao does in China. Every Rockets game is televised nationally and his every move is covered within the print and electronic media.

While outdoor basketball playgrounds have turned into parking lots in the United States, these same playgrounds are packed each and every day in China… Young and old… Boy and girl… It is truly an incredible sight.

Basketball in Japan is playing catch-up. The last time the Japanese National Team competed in the Olympics was 1976 in Montreal (finishing 11th). And while Yao and Yi Jianlian have each made incredible NBA impacts for China, only one Japanese player, Yuta Tabuse, has appeared in an NBA game. Tabuse played four times for the Phoenix Suns during the 2004-2005 regular season before being waived. Tabuse is currently our starting point guard for Tochigi Brex and although his regular season stint with the Suns was brief, he still enjoys Elvis Presley-like popularity in Japan.

Japan operates under the umbrella of FIBA. From the ball to the length of the games (40 minutes), basketball in the JBL is played just as it would be in any FIBA competition around the world. Each roster consists of 10 local/national Japanese players and two imports/Americans. Only one American is allowed on the floor at any point during a JBL game, thus putting a heavy emphasis on local players as well as chemistry between the two American players. Needless to say, Americans want to compete and one gets 30 minutes and the other 10 minutes… Some post games can get interesting.

Games are generally played on back-to-back nights (Saturday and Sunday) and the same opponent is played on each of those respective days. Interestingly enough, the same officials are used as well. The games generally start at 3 pm with an occasional 5 pm or 7 pm tip off mixed in. Twice this year our team has had a 5 pm tip off on Saturday followed by a 2 pm tip off on Sunday… Two games in 21 hours, you either need a miracle worker type trainer or great depth.

China, as it does with various other things within its culture, walks to the beat of their own drummer. China has attempted to make their game as similar to the NBA as possible (players, officials, game management and facilities notwithstanding). China’s game is 48 minutes long separated by four twelve minute quarters, NBA three-point line, time out and bonus situations are all NBA-like. As far as the Americans are concerned, my first year in the CBA the Americans could both be on the court at the same time and play unlimited minutes. The following year, Americans could play a combined six of the eight total quarters. In other words, if your two Americans stepped on the floor together for any length of time in the same quarter, that would constitute having used two of your six quarters. This year the CBA has granted the Americans unlimited time together except in the fourth quarter, when only one American may be used.

Because China is so totally obsessed with the NBA, each team tries to obtain the biggest name possible… Last year, for example, former NBA’ers Stephon Marbury, Donnell Harvey, Rodney White, David Harrison, Sean Williams and Smush Parker dotted CBA rosters. Late in the year there was talk of Allen Iverson joining the league. Chinese teams will pay big money to attract this type of talent, but as many players quickly find out, nothing is guaranteed in China and contracts can be broken in a heartbeat. When dealing with a Communist-based country, proceed with caution.

Japan, on the other hand, attracts very good players (many who have had NBA stints) that tend to stay in Japan and with the same team for several years. While the money is nowhere near the amount the Chinese are paying, Japan still pays well and the players enjoy a great quality of life along with sound, professional management from the front office. Money is always on time and the players (and their families) are treated with great quality and respect. It’s take-the-money-and-run in China or the security and quality of life in Japan… Having experienced both, I choose the latter.

Both the JBL and CBA are relatively young leagues (less than 20 years old). Therefore, as the actual basketball play has developed and progressed, so do have all of the other elements surrounding the game – with officiating being one of those facets. Much has been said and made of the officiating in China, with honesty and trust being at the top of the list.

Without going into detail (saving that for the book), playing on the road in the CBA is like bringing a knife to a gun fight – better shoot it really good that night. JBL referees are working extremely hard to improve. The biggest problem is that these referees do games at all levels of games – men and women, high school to professional – greatly affecting their consistency.

Both leagues have a long way to go in terms of officiating, especially in terms of consistency and accountability. It is the one phase of the Asian game that truly makes you appreciate American basketball. After three years in Asia, I am going to give the first American referee I see a big ol’ kiss on the cheek… And 50 bucks, just in case I ever see him in China.

The CBA began operation in 1995, while the JBL began play in 2005. Both leagues are novices in terms of comparing the sport to American standards.

The JBL has eight teams and plays a 42-game regular season with four teams advancing to the playoffs. A “Best of Three” format is used in both the semis and finals to determine the JBL champion. The Aisin Seahorses have won two of the last three JBL championships, however, Tochigi Brex is the league’s reigning champion – putting immense pressure on the shoulders of the coach and author of this blog.

The CBA currently has 17 teams and plays a regular-season schedule of anywhere from 32 to 50 games depending upon the timing of any international basketball competition scheduled for that year. Eight teams advance to the playoffs. A “Best of Five” format is used in the quarters and semis and a seven-game series decides the finals. In China, the Guandong Southern Tigers are quickly becoming a dynasty having won six of the last seven CBA championships.

Stay tuned for our next edition of the Asian Diaries, when we will take an up close and personal look at the local talent within China and Japan. And when I say talent, I mean small forwards, point guards and coaches… Damn, people, get your mind out of the gutter and focus on basketball.

Sayonara…. Bye-bye… See ya next time.