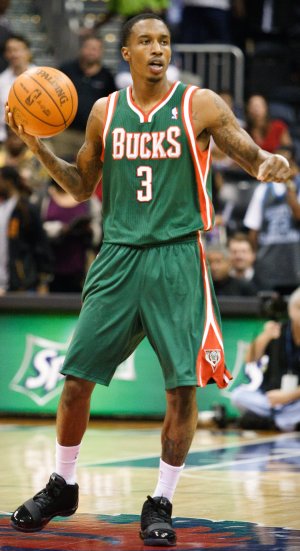 What’s the biggest difference from last season when you were a rookie to this season?

Brandon Jennings: That the game has slowed down for me. I feel I understand the game better. I now know what it really takes to win. I know what is expected of me and the team. And I know there’s going to be bit more pressure on us this year.

Rookies usually don’t get a lot of respect, especially from the officials. Now that you are a second-year player, have you received more respect?

You started all 82 regular-season games and all seven postseason games last season and you haven’t missed a game this season. You don’t like to miss games, do you?

BJ: I’m just blessed to be able to play and be healthy. You hear a lot about guys and their injuries, but you really can’t control those things. Like Greg Oden. You can’t really blame Oden. It’s just that his knees aren’t working right now. You just feel bad for him.

Last season, some scribes predicted the Bucks wouldn’t even win 20 games and instead they surprised a lot of NBA observers by making the playoffs. Since then, Bucks general manager John Hammond had added two nice pieces to the puzzle in veterans Drew Gooden and Corey Maggette. What have those two additions meant to the team?

BJ: They’ve meant a lot. With Corey, he’s a catch-and-shoot player; he can shoot the ball off the pick and pop and that’s kind of what we were missing last year. And Drew can rebound it. He can help out Andrew Bogut.

As a rookie, you drove a modest Ford Edge. Have you upgraded your ride?

BJ: I have a little Camaro. Nothing too expensive. It probably costs about the same amount. But I still haven’t gotten a luxury car yet.

So you’re not in any hurry to own a flashy sports car or extravagant vehicle?

BJ: My dream car is an Aston Martin. But that won’t happen until my second contract. Nothing right now. (He starts laughing). I mean I could get it right now, but then I would be eating peanut butter and jelly.

Who is a bigger tweeter: you or your teammate Chris Douglas-Roberts?

BJ: CDR. I’ve stopped tweeting lately. I’ve been off of it for a while.

Last season, you caught some flak for some of your tweets. Have you learned from your mistakes?

BJ: Yeah, I did. This year I’m kind of cautious about what I say on Twitter. I’m not as bold as I was last year. I guess you could say I’ve just grown up. And Twitter is kind of getting a little old for me now.

What are your team goals this season?

BJ: To win over 50 games. We got to 46 wins last year. And, hopefully, we can win the Central Division and make the playoffs and get out of the first round.

Are you saving your money for a potential lockout next season?

BJ: Oh, yeah. Of course. I think if a lockout comes, we can go overseas and play, right? I’ve heard guys say that.

You would actually play overseas next season?

BJ: You got to do something. I love to play the game of basketball, so I don’t want to just sit around. If there’s a lockout, I’d probably go overseas again and play.

And what country would you prefer to play in?

You obviously enjoyed the one season you played with Lottomatica Roma before joining the Bucks.

BJ: I did, and I know the city. I can get back there and go where I usually go. Maybe teams over there will have different expectations of me now. Hopefully, the work I put in over here will get me some minutes overseas.