Khalid El-Amin: "Europe gave me the opportunity to make more money than I would in the NBA"

Khalid El-Amin: "Europe gave me the opportunity to make more money than I would in the NBA" 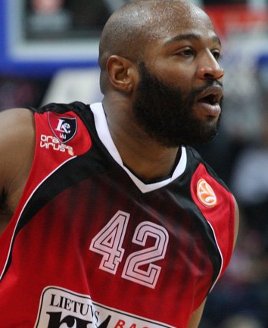 Are you enjoying your stay in Lithuania so far?

Khalid El-Amin: Lithuania is nice. Vilnius is the capital city and I’m finding my way very well here. Many things to do, many nice sites to see and… Yes! I’m having a good time here.

You’re playing there with Sarunas Jasikevicius. That’s a pretty potent backcourt for the Euroleague, so why is the team struggling?

KEA: Me being me, I’m coming to the team late. I arrived here one month ago. He had just come two games ago. Of course, we’re going to need some time to get to know each other to work in better chemistry. But our team in general, we must change our attitudes. I think we can have a chance to have a good team, but first of all we must be team. I think that’s the big part now – we’re not one group, we’re not playing together like a team.

When you first signed with a European team, did you think it would be a one-year thing and you would go back to the NBA after that?

KEA: I didn’t know what it was going to be. I was coming to Europe to make the most of my opportunity. If that meant maybe trying to go back to the NBA, that would have been great. If not, to make a good career in Europe. I know plenty of players before me who had a successful career in Europe and had a comfortable life. So it didn’t matter if I was going to go back to the NBA or stay in Europe. I just wanted to play well and do my best.

Was there a particular moment when you came to realize, “Well, my career is going to happen in Europe?”

KEA: After the first few years being in Europe, of course I realized that the NBA was not probably going to pay me as much as Europe. So I decided to take the most money that I can get and Europe gave me the opportunity to make more money than I would playing in the NBA – due to taxes and things life that. So I chose to stay in Europe.

KEA: No, I didn’t want to do that knowing they were not going to pay me a very big contract like I was going to receive here in Europe.

When you look back on the year you spent with the Bulls, what memories do you have?

KEA: Good memories. Of course it was my dream to play in the NBA and I had that opportunity to do that. The league is very good, but it’s also a business. I look back and I understand that I had a good time there, I learned a lot of things… Unfortunately, I just wasn’t able to remain there and have a great career in the NBA like I would have wanted to.

The situation in Chicago wasn’t all that good, right? It was a team full of young players trying to find a place.

KEA: Of course. People who know basketball understand that. What can I say about that? I was drafted onto that team and just tried to make the most of that opportunity that I was given. And I’m thankful for that.

A lot of teams in Europe are notorious for not paying in time or not paying at all. Have you gone through that at some point?

KEA: I’ve gone through that a couple of times, but what can we do about that? Clubs can get away with not paying a player due to a contract and they don’t have to honor that, but they always want the player to practice and play well. That is kind of a notorious thing going on in Europe. Fortunately for me, I haven’t had to deal with it too much and hopefully I won’t have to deal with that.

You probably have some crazy stories from your time over there. What’s the best?

KEA: I don’t know about the best. I’m just happy that I’ve been able to see the world because of basketball. My time in Israel was a great time. I always enjoyed being on the beach and on the sea and being in the nice city of Tel Aviv. In Istanbul, I was always around the sea with good weather. Probably those two places were the best for me, the best times where I could just relax and play basketball.

As for Connecticut, what do you think of all these allegations against Jim Calhoun and his staff?

Are you still in touch with your coach…

KEA: Oh yeah, every summer I go back there and I’m able to work out and play and see the coaching staff. I’m always going back there.

How much did it mean to win the national championship beating Duke at the Final Four?

What goals do you set for yourself for the rest of your basketball career?

KEA: Just to go out and do my job to the best of my abilities. You’re not always guaranteed to win the final of any league or any cups. I just try to go out and take it one season at a time and hopefully my hard work and the dedication that I put in will finish with a championship, a cup or something like that.

At Lietuvos Rytas, you are playing with Jonas Valanciunas, who is ranked very high in mock drafts right now? Do you see NBA potential in him.

KEA: Oh yes, I do. He’s 18 years old, he’s a young guy. The sky is the limit for him. Unfortunately now we’re not playing well and we want to win now, so him being young he still has to learn and get experience. But I think the potential is definitely there.