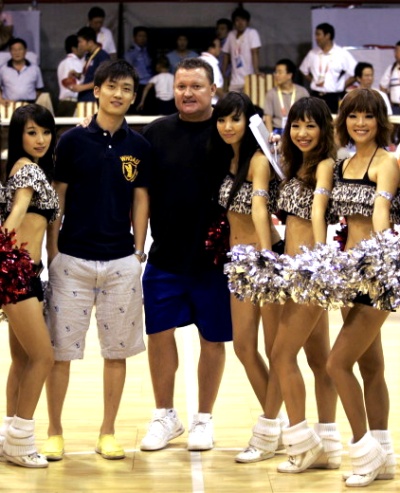 Happy Post-Thanksgiving, Diary faithful… I hope all of you were able to celebrate with family and loved ones…

Because as Americans, isn’t that what we TRULY have to be thankful for… 78-inch flat screens at 35 percent off…

Another Thanksgiving sailed by in Asia this past week…

Two years in China and currently in Japan. I haven’t had or seen a turkey in three years. That is unless you count those dressed in striped shirts and a whistle around their neck. OK, that was too easy, but you get my point.

Truth is Thanksgiving is not celebrated in Asia, nor should it be. The Mayflower never made it to this side of the world. This was Marco Polo territory.

A noun, Mr. Webster defines a “Pilgrim” as a wanderer or traveler, especially in a foreign land. Fitting for those of us currently coaching or playing on a foreign field of play.

A traveling basketball coach wandering through an amazing, unique, wonderful and bizarre foreign land.. minus the wooden shoes.

A little holiday trivia for you…

The Mayflower and the 102 “English Separatists” (better known as Pilgrims) aboard her sailed into Cape Cod 380 years ago… November 11, 1620 to be exact… not that I was there, but apparently “Wikipedia” had a representative on hand.

The Pilgrims celebrated the first Thanksgiving in 1621 – a party/feast to celebrate making it through the winter in Massachusetts. Had the Mayflower docked in Wisconsin, they would have really had cause to celebrate.

In 1863, President Abraham Lincoln made it official, declaring that the fourth Thursday of November be a national day of thanks – mired in our country’s bloodiest war, The Civil… I’m not quite sure what our 16th president had to be thankful for.

So, contrary to popular belief, Thanksgiving was not invented by Jerry Jones and the Dallas Cowboys – though something tells me Jerry is taking a little bit of the credit for it.

Still, though not celebrated, there is plenty to be thankful for on this side of the planet.

So here you go, in honor of our great American holiday… 21 things to be thankful for in Asia…

1. Great chinese food, but prepare yourself for the real stuff… The founders of PF Chang’s and Panda Express have never set foot in the Far East. They live in Dallas.

2. Cab rides. In China a half-hour cab ride, if you’re willing to and courageous enogh to get in one, might cost you the equivalent of $10. Take that same ride in New York City and you have to take out a second mortgage. Japan, unfortunately, is more like home. While seperated by only 300 miles, the cost of living goes up dramatically when one steps on Japanese soil. Five of the world’s top ten most expensive cities are in Japan.

3. Asian children. All due respect to my young Western friends – Asian children are adorable. In Japan a two year old will bow upon meeting/greeting you. Two years old. I know 27 year olds in America that can’t muster up “hello”.

4. China’s cooperation. You haven’t seen people work together until you have traveled to China and witness how they make 1.3 billion people click. It is truly inspiring. Here is a typical day at the beach in China.

5. Japan’s efficiency. Country wide, this has to be the most efficient culture in the world. A country the approximate size of California and the world’s third strongest economy? They’re doin’ somethin’ right here.

6. KTV or karaoke in China. Trust me, you have to see it to believe it. There are more KTV joints in China than sand wedges in Phil Mickelson‘s garage. You haven’t lived until you see your Chinese team trainer belt out some Elvis Presley… or better yet, Brittany Spears.

7. Japan’s cleanliness. If, as they say, “cleanliness is next to God-liness”, Japan is parked right next to the “Big Guy”. The gyms in Japan are so clean, you could literally eat off the three-point line.

8. China’s “Meal Wheel”. Imagine a merry-go-round on your kitchen table, then load it up with “goodies” and spin.. You don’t pass the gravy in China. You wait ’til it spins by.

9. Japanese work ethic. I have never been around a basketball team as a player, coach or spectator that works a hard as my current group in Japan. Incredible. We practice daily from 1 pm to 5 pm. Two and a half hours of actual practice time. The rest of the time the players stay to shoot, lift, condition… If our “grassroots” basketball system could adopt the Japanese mindset, we would never lose another international competition. Do you think it is just a coincidence that this tiny country dominates the world’s auto industry? Work ethic. Want your business to take off? Hire 10 Japanese employees.

10. China’s architecture. Like the Karaoke, you have to see it to believe it. Shanghai has the world’s most unique and incredible skyline. Take a look. The spaceship looking building is the local television station.

11. Window washers. Without question some of the world’s bravest people are the window sashers at the aforementioned Shanghai World Financial Center. Acrophobiacs need not apply. These dudes are nuts.

12. China’s traffic. Anything with wheels is a go in China. Bikes, scooters, buses, cabs, rickshaws, it’s “Thunderdome”. There are no rules. A trip to China and you will never again complain about traffic in America.

13. Convenience stores… I thought America had the market cornered on Seven Elevens… until I traveled to Asia.

14. The Great Wall. There is a reason it is one of the Seven Wonders of the World. It is 5,500 miles long (and built into mountains) and made entirely by hand. Here is perspective: It is 2,444 miles from New York City to LA. That is a big fence.

15. Skype. If you don’t know what it is look it up. An amazing and free technology that allows you talk to any person in the world computer to computer. Truly an American’s best friend in Asia.

16. Christmas Eve in China. Picture Times Square on New Year’s Eve and then multiply it by a 1,000. It’s complete bedlam. Santa, Donner and Blitzen don’t stand a chance.

17. Airports. Unlike in America, where you have to undergo a colonoscopy to get to your gate, in Asia it is simple and efficient.

18. Acceptance. As a coach in Asia, this is not a vacation or 10-day getaway. For three years, I have been embedded in the Asian culture and while the peoples of each country are strikingly different, each culture has welcomed me and made home seem not so far away. The world, in my very humble opinion, would be a much better and happier place if we all had the chance to see what transpires on the opposite side of the planet.

19. Smokers. Not that I am thankful for this, but it is worth mentioning. It is estimated that nearly 400 million people smoke in China or in other words when you roll out of bed tomorrow morning imagine everyone in America lighting up. Probably the No. 1 facet of the Chinese culture I don’t miss.

20. Safety. Despite the enormous crowds and a severe language barrier, I have not once, in three years, ever felt threatened or in harms way in Asia… I take that back, two years ago we were down 15 in the second half to China’s Red Army, a basketball team backed by a three-million person army, one American coach (me), threeChinese referees… That night I knew we had a problem.

21. Friends. As we (American coaches and players) toil away thousands of miles from family, friends and loved ones, we are reminded that life’s journey is not about the miles traveled, but friends made. This incredible opportunity has allowed me to meet and become friends with some of the most interesting and amazing people in the world.

For that I am truly blessed.