The CBA discussions: A background

The CBA discussions: A background 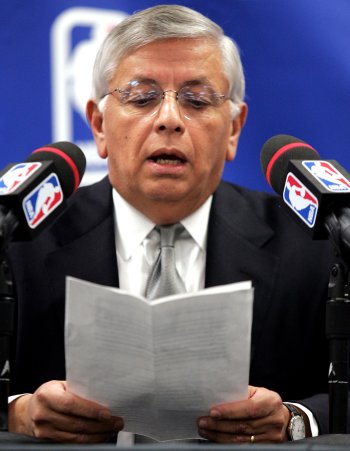 This blog is my first in a series designed to probe the complex issues related to the NBA’s collective bargaining discussions. I hope that this blog series plays a small part in advancing thoughtful discourse towards a new, fair, and sustainable Collective Bargaining Agreement. In the blogs that follow this brief but necessary background piece (unnecessary for those closely following the topic), I will give concrete ideas on an array of key collective bargaining issues.

After enduring a lockout that nixed 32 games of the 1998-99 NBA season, the NBA’s owners and its players’ union (the NBPA) were resolute to avoid a lockout come CBA negotiations in 2005. During the build up to collective bargaining, commissioner David Stern bemoaned the NBA’s “negative position” but acknowledged that such wasn’t the case for every team. While 11 teams had negative operating revenues in 2004-05, attendance was fourth highest in history and the equity value of NBA franchises rose in 2005 by a whopping 9 percent, representing hundreds of millions of dollars for NBA owners.

After an assortment of financial figures were tossed around, the most important number, the percentage of NBA revenues (known as BRI, or basketball-related income) that would be assigned to the players versus the owners remained the same. As in 1999, NBA players would receive 57 percent of revenues, and owners would receive 43 percent. Additionally, in an effort to lend a hand to the minority of teams suffering operating losses, the luxury tax (the NBA’s sole revenue sharing device) was modified to be in effect each year, taxing every team whose roster exceeded 61 percent BRI. Previously, the luxury tax would only take effect when total NBA player salaries surpassed 61.1 percent of BRI.

Particularly since 2008, the U.S. and world economies have fallen on hard times. Despite this, NBA revenues have increased every year since the 2005 CBA took effect, increasing by $469 million over the last five years. However, these increases have been growingly slight each year (declining from $210 million to $135 million to $89 million to $35 million). A far cry from the 9 percent increases in 2004-05, owner equity actually dropped 3.6 percent between 2008 and 2009. This loss in equity has made it that much harder for owners to justify the operating losses (Forbes reported that 12 teams lost money in 2008-09).

Commissioner Stern has asserted that the NBA was on track to lose $400 million in 2009-2010, after losing at least $200 million in each year governed by the 2005 CBA. Having negotiated for the short end of the stick in 2005, Stern is determined to make it up to his owners in the coming CBA.

He has publicly proclaimed that “[The NBA] would like to get profitable, have a return on investment. There’s a swing of somewhere in the neighborhood of $750-to-800 million that we would like to change.”

By way of contrast, the NBPA’s executive director, Billy Hunter, has pointed to the NBA’s record revenues, a flurry of high-priced re-signings and free agent acquisitions during the summer of 2010 as evidence that the NBA’s owners are doing just fine. With 17 teams boasting attendance above the 89 percent attendance average in 2005, Hunter has been plenty doubtful of commissioner Stern’s pleas for cost-cutting. What is more, the Golden State Warriors just sold for $450 million, a price that far exceeded the previous record sales price for an NBA team (Phoenix was sold to Robert Sarver in 2004 for $401 million).

THE STAGE IS SET

The NBA is less than a month into an NBA season that is brimming with story lines that will make for some of the best reality TV on television, including a vibrant Lakers-Celtics rivalry as well as the Miami Thrice down in South Beach. Come the 2010-11 season’s enthralling end, ratings will make a run for all-time highs, and the NBA and NBPA will hopefully have substantially agreed on how to save a sport second only to soccer in captivating the world’s imagination. In order to get to that point, however, we need more serious and thoughtful discussions now.

THE MEN AT THE TOP

At age 68, and having served as executive director of the NBPA since 1996, Billy Hunter is entering what is likely to be his last collective bargaining agreement. Hunter has presided over an era that has seen an absolute explosion in both the NBA’s popularity and, more importantly for his constituents, NBA player salaries. While the NBA’s players lost money directly in the form of salary during the 1998-99 lockout, Hunter made that up to them in negotiating the 2005 deal, which has left the NBA crying poor. It is the job of Hunter to get a fair deal for his players and to keep them employed. Letting the perfect be the enemy of the fair could imperil the NBA’s players in the short-term and the image of the league (and by extension its players and their salaries) in the long-term.

If what commissioner David Stern and deputy commissioner Adam Silver are saying is true (they have offered the NBA’s books as evidence of the owners’ plight), that the NBA as a business has lost over $1 billion since 2005, then Stern is likely to be serious about making some significant changes to the NBA’s revenue structure. While an NBA lockout will alienate some NBA fans even after the lockout lifts (thus hurting owners’ revenues), a lockout will hurt the NBA’s players even more, as they lose the salary that they count on to live. Knowing this and knowing that a lockout may actually enable about a dozen or so of the NBA’s teams to stave off operating losses, Stern is likely to drive a hard bargain.

Moreover, NBA owners are set to receive a portion of guaranteed money from their TV deal even if no NBA games occur. In the absence of a CBA, these funds would seemingly not be split with NBA players. Knowing that his constituents are in a better position to weather a lockout than Hunter’s, Stern has boldly issued a demand that the NBA’s owners not only become universally profitable (requiring a swing of $380 million in revenues) but become universally profitable and then some (i.e. the desired swing of $750-800 million).

This will be a complex negotiation because both Hunter and Stern have constituents whose interests are, at times, diametrically opposed. On the union’s side, some players, whose time in the NBA is very limited, would prefer a quick settlement, even if it meant a higher percentage drop in salaries. Conversely, young players with a long and bright future would likely prefer to hold out for the best deal possible, as any time lost would be more than offset by the many years of future service at higher salaries.

Similarly, Stern has a contingent of owners who would make plenty of profits by proceeding with a CBA like the one currently in place; others, however, would lose money by keeping their doors open for business and will press Stern to drive a hard bargain.

There is enough money generated by the NBA, even during a down economy, to provide plentiful profits for owners and rich salaries for players. The trickiest part will be negotiating the BRI split because any percentage increase garnered by the NBA will be a percentage loss suffered by the players, and vice versa.

If it becomes necessary for NBA players to take a paycut (as so many Americans have already done), will their egos allow them to ratify this? Will players be able to understand that, despite their world-class talents, the greater business enterprise that they are a part of must be financially secure and healthy for all parties?

Will Stern understand that there are some natural anchoring effects (a behavioral psychology term suggesting that human beings are more hard-pressed to give up things that they already possess and have had for some time) that make it impossible for him to approach the CBA talks as though no CBA had come before?

Will NBA owners who have been operating profitably for decades be willing to do their part to make the entire NBA entity a stable one by agreeing to greater revenue sharing?

The answers to these questions and others will be critical in determining whether the NBA will avoid a lockout and continue to grow as a world entertainment superpower. In the coming weeks, we will continue this blog, releasing a series of articles containing opinions, suggestions, and ideas that will hopefully spur conversation around the league.